Today I am checking out NA Author Jessica Gunn - Gyre 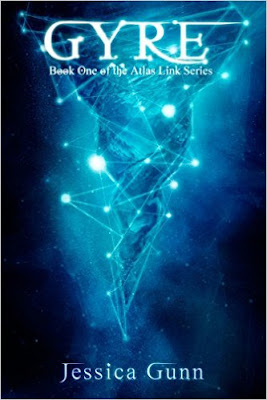 Before the whole teleport business, Chelsea had her life mapped out. She was going to be an archaeologist. Spend her days digging up the past and her evening devoted to her rock band. Damn it all, she was meant to be performing at the Battle of the Bands. She wasn't meant to be here, with Trevor - the guy who had stepped in when she was being mugged.

Trevor had never met anyone like Chelsea before, her eyes drew him in. He couldn't stop thinking about her. But the very last place he wanted her was on board eaSatellite5. And the fact that she teleported in meant only one thing – her ancestors are from Atlanta - his ancestors sworn enemy. He had to get her off the station - for her own protection and for his sanity.

Chelsea has no idea what has just happened to her, but there are people at the station that can help her with her new found superpowers. But an ancient war - she never knew existed - is still raging and Chelsea is of interest to both sides, for she can read a sacred map that could bring the war to an end once and for all.

Can Trevor keep her safe while a war, not of their making, threatens to destroy their lives?


What did I think of the Story?

Ancient myths, fantasy, archaeology, time-travel and romance - this book had a bit of everything. I liked the idea of an ancient battle and time-travel - this really caught my interest.


Chelsea was an interesting character. She acts rather childish to begin with - and has a very aggressive attitude that I didn't really take to. Yes, she has a past - her boyfriend betrayed her and is now making-out with her ex best-friend – there is no doubt that she was treated appallingly, but she just came across as too aggressive for my liking. Once she had teleported I began to warm to her more, and as her relationship developed with Trevor she became much more likable and I enjoyed reading about her.


Trevor, however, I liked right from the start. He was a little unbelievable as a computer geek...he didn't seem to know what was going on with his own computer system - which I thought was slightly odd. But nevertheless he was endearing.  He kept far too many secrets, in a mistaken belief that he was protecting Chelsea. A bad decision. It was obvious that she needed to know who she really was and what that meant for her safety. Instead she found herself in impossible situations with no idea what was going on and what to do about it.


The plot was good. It was engaging - if not a little predictable and I felt it wasn't always fully developed. I am guessing that is because we will learn more in the next book. Can't wait for the next book!


What Gunn wrote exceptional well was the romance between Chelsea and Trevor. The idea that whenever she was in distress she would teleport to Trevor was sublimely beautiful and really appealed to me. Their relationship was very believable and I really enjoyed it when  these two characters were together and I got the impression that Gunn was most relaxed in her writing when her two protagonists were in each others company.


I will be checking out book 2 in the series, because I am interested in the world that Gunn has created. I would recommend.

Jessica Gunn is a New Adult author and avid science-fiction and fantasy fan. Her favorite stories are those that transport the reader to other, more exciting worlds. When not working or writing, she can be found binge-watching Firefly and Stargate, or feeding her fascination of the ancient world's many mysteries. Jessica also holds a degree in Anthropology.
Links
Twitter @JessGunnAuthor
www.jessicagunn.com.