The Battle of Camlann - The final battle of Arthur Pendragon

The Battle of Camlann is reputed to have been the last battle that Arthur fought in, although there is no mention of it in Nennius famous list of battles. The first documented evidence of the battle can be found in the 10th Century work, Annales Cambriae. 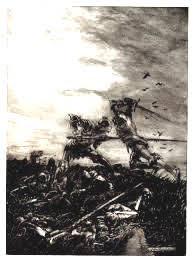 (How Mordred was Slain by Arthur, and How by Him Arthur was Hurt to the Death, by Arthur Rackham)

Now, legend would have it that this was the battle in which Mordred turned on Arthur and they fought each other - but the Annales Cambriae does not actually say this...it simply states that they both perished. It makes me wonder?

But, never mind that, it certainly did not stop Geoffrey of Monmouth writing his romantic work of fiction - I meant fact...historical fact...I am always getting that wrong!

If you are not familiar with the story, than I shall do my best to enlighten you!

Arthur finds out about Lancelot and Guinevere's betrayal. So enraged is he, that he follows Lancelot to France, determined to seek his revenge. Arthur leaves Mordred in charge of Britain in his absence.

While he is away, Mordred decides that he rather likes being King of Britain and upsurges Arthur.

Arthur, learning of Mordred's treachery, takes his army back to Britain and the two meet at Camlann where they battle for the throne. Mordred is killed - by the hand of Arthur, perhaps? Unfortunately, Arthur is also fatally wounded. He is taken to Avalon -- the water is said to be magical and he hopes it can heal him. No one knows what happened to Arthur after that. It is a mystery.

Where is Camlann?
As with all stories of Arthur, there are many haphazard guesses as to where Camlann is. However, there is one clue, Camlann comes from the word, Cambo-glanna, which means a crooked bank of a river! It remains me of Gidas and the location of Badon Hill - The battle was in the south-west. There was a siege on a hill. So helpful!

Monmouth suggested Queen Camel in Somerset, which would be an ideal location if Camelot was at South Cadbury, for the two are very close and for a fictional story it makes perfect sense. Mordred would defend his strong hold on Camelot, whilst Arthur would do everything within his power to reclaim Camelot and Britain. 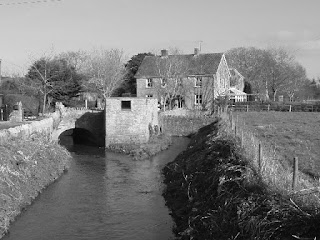 Queen Camel and that crooked river.

Monmouth tells of a proper full on battle, where the opposing armies line up to face each other, whereas Malory says that the battle was a mistake, a simple misunderstanding, which involved a snake and one of the knights drawing his sword to kill it -  this made the rest of the army draw their swords and carnage consequently resulted. Some mistake!