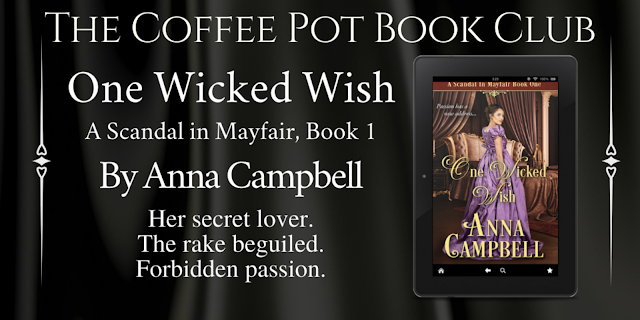 One Wicked Wish
(A Scandal in Mayfair, Book 1)
By Anna Campbell 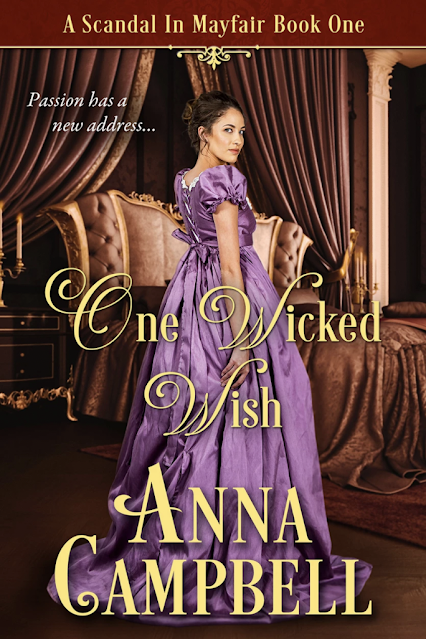 Stella Faulkner has been a despised poor relation in her odious uncle’s house since she was forced to flee Italy ahead of Napoleon’s invasion. In return for a roof over her head, she acts as her cousin’s unpaid governess and companion. Stella knows that if she shows the slightest trace of her disgraced mother’s wildness, she’ll be cast out to face destitution. But after ten years of thankless servitude, Stella encounters a dashing libertine who turns her world to flame. Handsome Lord Halston is irresistible, but every kiss, every caress carries the risk of discovery, and with discovery, disaster.

Grayson Maddox, Earl of Halston, glories in his reputation for charm, seduction, and ruthlessness. His mistresses know that the profligate lord offers them pleasure and luxury, but when he says goodbye, the affair is over. To Halston, love is a sentimental myth and fidelity a trap. One night at a glittering ball, he sees a beautiful woman trying to fade into the crowd of dowdy chaperones and every instinct clamors to make this mysterious lady his. But all bets are off when Stella Faulkner promises to become the lover he’ll never forget.

Halston and Stella start a sizzling affair under the cover of a respectable house party at his country estate. But once this interval of heady delight comes to an end, what will become of the humble governess and the wicked earl? Must they return to being strangers as they originally arranged, or will five days of intoxicating sin turn into forever?

London, May 1816
Stella sucked in another breath. The realization seeped in that she’d committed to become Halston’s lover. Even worse, she couldn’t muster a moment’s regret about the decision. “Now I think you should take me home.”
His devilish smile set her secret places clenching. By heaven, he was a beautiful man. How could she, how could any woman resist falling?
“Not quite yet. We need to seal our deal.”
A sudden attack of nerves made her disentangle their fingers. Her hand rose to the base of her throat where her pulse raced fast enough to win the Derby. “You said you’d wait until…”
“Until we get to Prestwick Place.” His smile intensified. “I did. But I’m sure that a woman who makes such a businesslike contract to come to my bed can spare me a kiss on account.”
***
Halston watched her eyes darken. Stella Faulkner had such an expressive face, especially now that she stopped guarding every reaction. How difficult it must be for this passionate creature to restrain all her natural impulses when she was in her uncle’s house. Life had been ghastly unfair to this exceptional woman.
The carriage began to move faster. An opening must have appeared in the traffic. With every second, the charged atmosphere inside the vehicle intensified. When they came together at last, the explosion would rock the world.
“Kiss?” The slide of her tongue moistening her lips shuddered through him like gunfire.
“Yes.” He made another wry gesture toward the sling. “If I were in full fighting order, I’d take you into my arms right now. As it is, I’ll have to ask you to come and sit beside me. Will you do that?”
Her lips twisted. Self-deprecating humor was such an essential part of her. “It seems absurd to hesitate when you have my promise that I’ll come to your bed.”
“But right now, it would be easier if I could sweep you into my embrace and make the world go away?”
“Yes.”
He held out his good hand. “Come kiss me, my darling. I hunger for you.”
Her smile faded, and he caught a glimpse of the depth of her craving for him. She’d stopped pretending that she had any more choice in what happened between them than he had.
He liked that. He liked that very much indeed.
Halston couldn’t remember the last time he was in thrall to a woman, the way he was in thrall to this one. His craving made a mockery of propriety and caution and prudence. The idea that he might experience this volcanic yearning alone was unbearable.
It turned out that he wasn’t alone.
Stella trembled when she took his hand and shifted next to him. As she’d pointed out, the old carriage held traces of twenty years of former passengers. Unwashed humanity. Stale tobacco. Dust and dog hair. But she was so close now that something fresh and citrusy tinged his deep breath of relief. He caught a hint of something else, too. An alluring female warmth that must be the scent of her skin.
She turned toward him, and her gaze found his as she took off her plain bonnet. For a long moment, they studied each other. The hubbub of London, the seedy surroundings, the threat of discovery, all dissolved to nothing. The world shrank to this woman and his compulsion to claim her.
This close, he could see the pupils dilate in her golden-brown eyes. Her lips parted as her breath rushed out, and her breasts swelled against the unbecoming gown. By God, if she was his mistress in truth, he’d dress her to match her leonine beauty.
But he already knew that this affair would be brief and intense, and a matter of secret assignations. He’d never get the chance to set Stella Faulkner up with a house and a carriage and a bed that he had a right to share while he paid her bills. She wasn’t one of his pretty light-skirts, contracted to stay as long as he was interested in them.
Perhaps Halston should be grateful for that. He wouldn’t have to watch this initial enchantment fizzle away into boredom and bitterness. It must be the force of his current desire that had him convinced that this time his interest wouldn’t fade, that this time the fascination would only grow.
To his surprise, his hand was unsteady, too, as he cupped the delicate line of her jaw. The shock of his skin on hers slammed through him, the way it had when he’d taken her arm yesterday afternoon.
Stella gasped when he made contact, and her eyes widened. She felt it, too.
The day was cold, but her skin was warm and smooth. He rubbed his thumb against her cheek and leaned in closer. He was near enough to taste her breath. It carried a hint of tooth powder, because it was still so early in the morning. Most people he knew would still be sleeping off last night’s excesses.
With a gentleness in opposition to the storm raging through him, he tilted her face up to position her for his kiss.
“Halston…” she whispered, and the longing in the sound had him quaking. He couldn’t remember the last time a woman had made him shake. Stella made him shake without even trying.
“Yes, sweetheart?”
She curled her gloved hand behind his neck to bring him closer. “Stop teasing me, curse you.”

Pick up your copy from your favourite online bookstore - HERE!

It’s always exciting to start a new series. You get to play in a new place and meet new characters and give them new problems to solve and new happy endings to find.

After writing 10 books set in the Scottish Highlands with my Lairds Most Likely series, I’m back in my old stamping ground of Regency London with my latest set of books A Scandal in Mayfair. That’s about as London as you can get, really!

The series starts with a really steamy story called One Wicked Wish, which makes use of one of my favourite tropes, the downtrodden governess who takes the scandalous rake’s eye. Jane Eyre, anyone?

Not that Stella Faulkner, my gutsy heroine, has much in common with Charlotte Bronte’s famous creation, apart from her courage. She’s not an innocent, and when she finds herself attracted to the dashing Lord Halston, she doesn’t fight very hard to stay out of his clutches.

Stella has had a really difficult time in life, especially since she had to flee the French invasion of Naples in 1806 and move in with her boorish uncle who treats her with complete contempt, while doing his best to squeeze as much unpaid work out of her as possible. This short affair with Halston could be her last chance to seize some genuine happiness before she succumbs to the grim, poverty-stricken future that extends ahead of her. But the stakes are high when a governess succumbs to a rake’s blandishments - if anyone finds out about her fall from grace, she faces complete ruin.

My tale of powerful passion turning into love takes place against all the fabulous glamour that makes the Regency such a popular setting for historical romance. There are balls and house parties and secret rendezvous and foiled elopements, not to mention the constant fear of private intentions becoming public and causing a major scandal.

One Wicked Wish came out on all e-book platforms on 30th June and I’m already hard at work putting the finishing touches to the second book in the series, Two Secret Sins, which features Stella’s cousin Eliot Ridley, Viscount Colville who is involved in a secret affair of his own, with the notorious widow Lady Verena Gerard. It’s out on 31st August and is up for pre-order now! 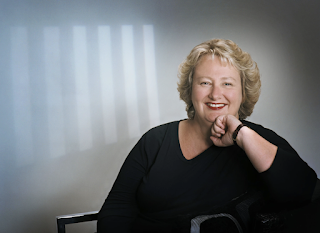 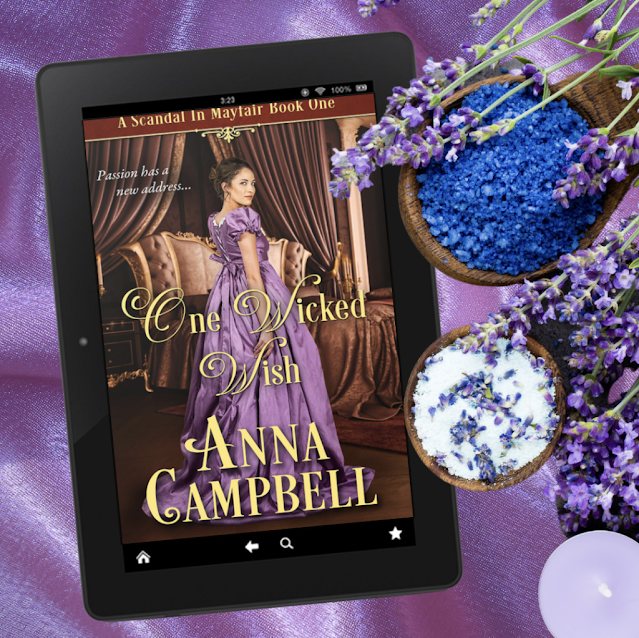