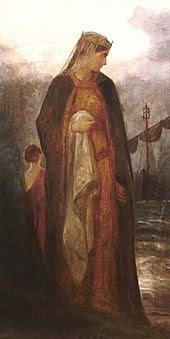 What do we know of Guinevere?
She was....

Guinevere was embroiled into a love triangle that was always going to end badly. She had it all. A loving and powerful husband. A beautiful home. She was popular and loved by the people. She should have been happy and who knows, maybe she was. But her fate was sealed the day she met Lancelot.

So where forth did she come from and what has she got to do with the Welsh?

Firstly we need to check out her name. In Welsh she was called Gwenhwyfar - The White Enchantress / The White Ghost - that makes her sound kind of seductive with supernatural powers doesn't it?

I want to look at  Trioedd Ynys Prydein, for those of you who don't speak Welsh - I am among your number - it translates as The Triads of the Island of Britain.

I want to specifically have a look at line 56 ( LVI - for those who prefer Roman Numerals)! Have a read.

So it seems that Arthur was married 3 times. Luckily all his wife's were called Gwenhwyfar.  He never found himself in a position where he said the wrong name - that must have come in handy?!

But hey, Arthur was not content with just a wife. Oh no...

And his Three Mistresses were these:
Indeg daughter of Garwy the Tall,
and Garwen (Fair Leg) daughter of Henin the Old,
and Gwyl (Modest) daughter of Gendawd (Big Chin).

That is interesting...don't you think? I never think of Arthur as having mistresses. He is always portrayed as the wounded party  - I knew there was more to it than we first thought!

I think the names (translations) are great. I wonder if Big Chin was meant as a compliment back then?

I love reading the Triads of Britain..and I think you will like them too.  I have always been particularly interested in the...

Three Golden-Tongued Knights, Whom No One Could Refuse Whatsoever They Might Ask.

Three Golden Shoemakers of the Island of Britain 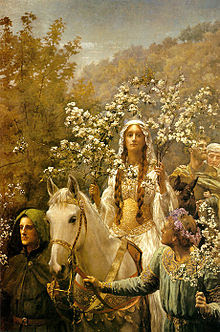 If you did not know already, everything in Britain comes in three's and that it a fact - well, maybe. But hey, it would hardly be a Triad if it didn't. And come to think of it - the love triangle idea is beginning to make sense - there are three points to a triangle...I know it is a very weak hypothesis. I'll shut up now.

If I have sparked your interest in the Triads then Celtic Twilight have a fabulous translation on their website.  http://www.celtic-twilight.com/camelot/triads/

There is another Triad that mentions Guinevere. The Trioedd Ynys Prydein. This states that Gwenhwyfar fell out with her sister which caused the Battle of Camlann. Typical - women always get the blame.

In my next post on Guinevere, I am going to take a look to see what are old friend, Geoffrey Monmouth, made of her. He had those lost manuscripts after all - so everything he says must be true.

Email ThisBlogThis!Share to TwitterShare to FacebookShare to Pinterest
Labels: Arthur and his Knights of the Round Table, Arthur Pendragon, Guinevere, King Arthur, Myths and Legends, The Du Lac Chronicles, Welsh folklore