Have a sneak-peek between the covers of Zara Altair's fabulous book: The Roman Heir @ZaraAltair 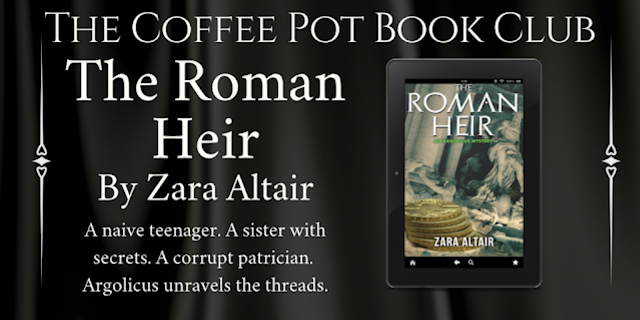 The Roman Heir
By Zara Altair 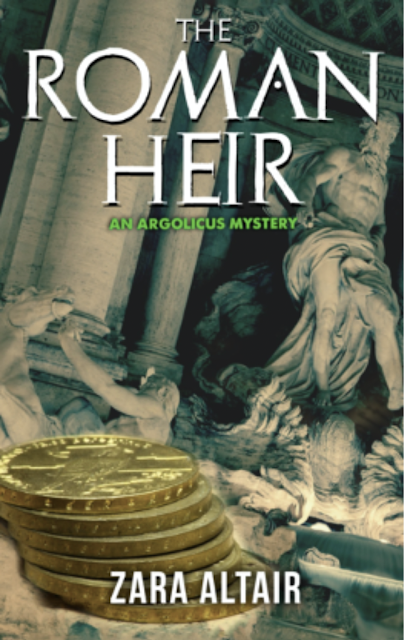 Publication Date: July 22, 2017
Publisher: Fervent Crux Press
Page Length: 100 Pages
Genre: Historical Mystery
A naive teenager. A sister with secrets. A corrupt patrician.  Argolicus unravels the threads.
When Argolicus leaves Rome to retire to his estate in southern Italy, his powerful friend Boethius asks a small favor, deliver a book to a young man in Ostia. When he arrives in the dying resort town, he finds chaos and sorrow in the villa. The young book lover’s father was viciously murdered just hours before and the young man asks for help.
With just days to find the killer before his ship leaves port, Argolicus must probe the politics of the dying town. But with every investigation he makes, the circle of possibilities grows. Success seems out of reach and he must disappoint the family, until a ruffian accosts him and pieces fall into place.
The Roman Heir is the third book in the Argolicus mysteries set in Ostrogoth Italy. If you like a puzzling mystery and rich historical detail, you’ll love The Roman Heir.
Buy The Roman Heir now to go back in time when murder wasn’t a crime!

The words were not as cold as the Roman winter air, but they stung Argolicus.

“You see,” Boethius said, leaning toward Argolicus in a confidential manner, “Rome is a closed community. When someone like you whose family lineage is not from one of the great families of Rome and as a newcomer attempts to take on a centuries-old Roman position, you set yourself up for strife. You are wise to retire, go back to your provincial Bruttia and live as local nobility.”

Argolicus watched from the palatial villa on top of the Caelian Hill gentle snowflakes fall on the city and the forum below. He stood on a balcony where Boethius had led him just minutes before. Behind them loomed a grand study filled with manuscripts and books.

Boethius carefully peeled an apple, the skin curling off onto the floor at his feet.  Argolicus knew everything Boethius was saying and they echoed his reasons for leaving. He also knew Boethius, so he waited for him to get to the point.

“The same talents that make you a good judge,” Boethius continued, “hamper your political power. You read people, you consider all possibilities, you listen carefully to all sides, you weigh outcomes. In politics you must make a decision, move quickly, ignore repercussions, and strike.”

Argolicus recognized his political failings and felt the sting of being blocked on more than one occasion by the powerful families of Rome and the prelates of the Church.

“Go back to your home, enjoy your studies.” Boethius said as he cut off a small section of apple. One of the richest men in Rome, Boethius loved books as much as Argolicus, perhaps even more. “I have a parting gift for you.” He bent to the table and lifted a book, handing it to Argolicus.

Argolicus looked down at the small book, almost a pamphlet, but covered in leather.

“I translated it,” Boethius said, as he looked down at the book. “Aristotle’s Categories. I know you are one of the few left who read Greek, but I thought you might like it for your collection.”

Truly pleased, Argolicus smiled. “Thank you. I will read it in solitude without the endless sessions of reading Greek aloud.”

“Ah, Nikolaos,” Boethius said, reading Argolicus’ mind, “he is a taskmaster.” Argolicus’ tutor and lifelong companion waited for Argolicus somewhere in the villa.

“He is,” Argolicus said smiling, “but without him my Greek would suffer.” The two men stood looking out over a wintry Rome.

“I’m wondering,” Boethius said, “Are you going by ship? Or by land?”

“I have another copy for a young scholar. I’m wondering if you could deliver it for me. Books are so precious, I dislike just sending them. Plus, you would like the lad. He loves to read and think.”

“He lives in Ostia in the old family villa, a large domus in the center of the city. His father is a friend of Symmachus and I thought…”

Ah, here it was politics. Even as he was leaving Rome one last push.

“Of course, I’ll take it. We were leaving in four days, but I could leave tomorrow and stop to deliver the book. What’s his name?”

“Servius Norbanus Philo. He is the son of Pius.”

Argolicus knew this errand tied him to Roman aristocracy, another wealthy and old family. Servius Norbanus Pius had inherited a shipping business that had grown with the stability of King Theoderic’s rule. In Rome, his home was near Boethius on the Caelian Hill, but one of the reasons for his success was his constant presence in Ostia near the huge shipping center Portus to personally oversee the shipping business. “Philo,” he said. “I shall make sure he receives your gift.” 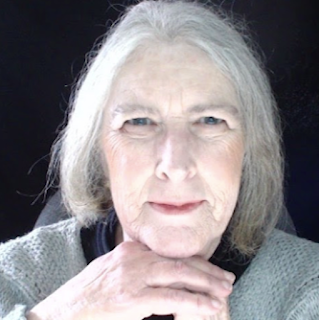 Zara Altair writes traditional mysteries set in Ostrogoth Italy. Meet Argolicus the Roman patrician who thinks his way to finding a killer.  The Argolicus Mysteries are  The Roman Heir, The Used Virgin, The Peach Widow, and The Vellum Scribe, with more on the way. A mystery lover since childhood, she has written about writing for a number of publications, including ProWritingAid and International Thriller Writer. She is a founding member of Columbia River Sisters in Crime. She lives in Beaverton, OR, where she reads, walks among trees, and shares space with a cat.  She coaches mystery writers at Write A Killer Mystery.