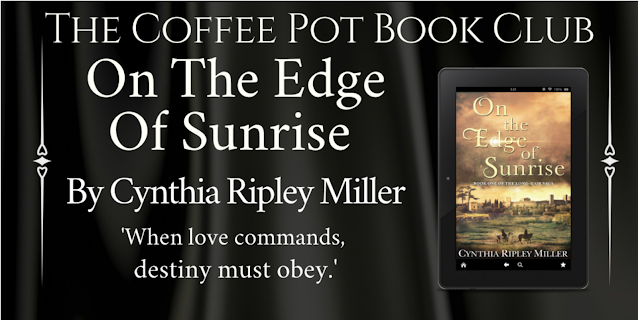 On The Edge Of Sunrise
(The Long-Hair Saga, Book 1)
By Cynthia Ripley Miller 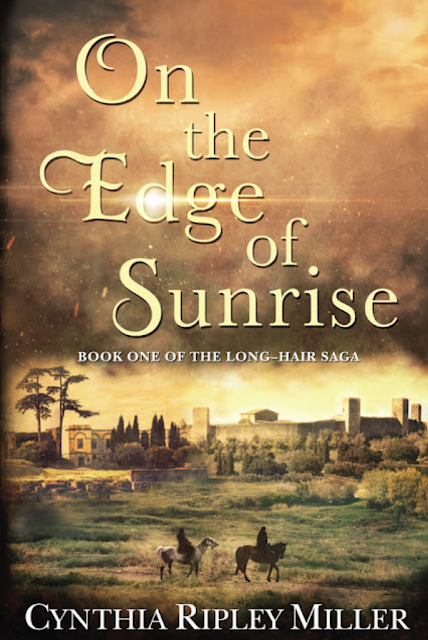 Publication Date: 30th April 2018
Publisher: ‎ Booklocker.com
Page Length: 306 Pages
Genre: Historical Romance
When love commands, destiny must obey. The year is AD 450. The Roman Empire wanes as the Medieval Age awakens. Attila the Hun and his horde conquer their way across Europe into Gaul. Caught between Rome’s tottering empire and Attila’s threat are the Frankish tribes and their ‘Long-Hair’ chiefs, northern pagans in a Roman Christian world, and a people history will call the Merovingians.
A young widow, Arria longs for a purpose and a challenge. She is as well versed in politics and diplomacy as any man … but with special skills of her own. Emperor Valentinian, determined to gain allies to help stop the Huns, sends a remarkable envoy, a woman, to the Assembly of Warriors in Gaul. Arria will persuade the Franks to stand with Rome against Attila.
When barbarian raiders abduct Arria, the Frank blue-eyed warrior, Garic, rescues her. Alarmed by her instant and passionate attraction, Arria is torn between duty and desire. Her arranged betrothal to the ambitious tribune, Drusus, her secret enlistment by Valentinian as a courier to Attila the Hun, and a mysterious riddle—threaten their love and propel them into adventure, intrigue, and Attila’s camp. Rebels in a falling empire, Arria and Garic must find the strength to defy tradition and possess the love prophesied as their destiny.

Life in ancient Israel: Lifestyles of the Affluent

In researching the period, culture, terrain, and customs, I came across a few surprising facts and details that existed even earlier. Some are surprisingly similar to the habits and customs of today.

In the cities of Sepphoris, Caesarea, Bethsaida, Masada, and Jerusalem:

Archaeologists have discovered that particularly affluent residents in ancient Caesarea enjoyed such luxuries as a ‘toilet near his table’ and a toilet was found in a Roman villa near the dining room at Sepphoris in Galilee. 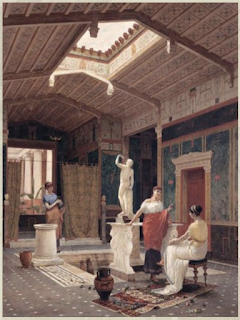 Roman aristocrats could also afford to eat meat every day and from silver and goldware, whereas the poorer classes ate off dishes made from pottery.

They paid taxes and paid as much as ‘2/3 of their profits to local governors and the Romans.’

Servants were essential. Some country landowners had more than 50 servants to make their lives easier and comfortable. 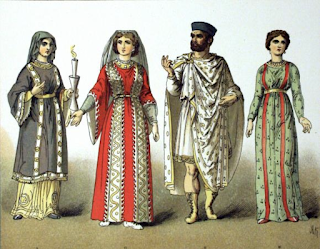 Religion and Politics in Jerusalem in the 5th Century AD

In the Roman period referred to as Late Antiquity (1st through the 7th century), Jerusalem became a Roman colony. It was rebuilt and named Aelia Capotolina by the Roman emperor Hadrian in 130 AD. A pagan, Hadrian built a statue of himself and placed it in front of the temple he built to Jupiter on the site of ‘the second Jewish temple, The Temple Mount.'

This action, along with several other ‘idolatrous’ acts, caused the Jews to launch a third Jewish revolt, which failed. Afterward, the Jews were banned from the city ‘on pain of death.'

This exclusion of the Jews from Jerusalem lasted for centuries, with one small reprieve in 363AD by Constantine’s nephew Emperor Julian. Still, later, the privilege was denied them, and the one occasion allowing them to visit once a year on what is assumed to have been Tisha b’Av. 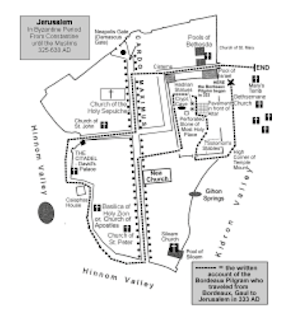 The Bordeaux Pilgrim who visited Jerusalem in 333-334 wrote, ‘There are two statues of Hadrian, and, not far from them, a pierced stone to which the Jews come every year and anoint. They mourn and rend their garments and then depart.’ They weren’t allowed back into Jerusalem until 1187 when Saladin captured the city, summoned the Jews, and allowed them to resettle in Jerusalem.

After Constantine, and in the late Roman era or Late Antiquity, Christianity spread throughout the Roman Empire. It became the predominant religion of ‘Palaestina,’ and Byzantine Jerusalem ‘was almost completely Christian’ although other religions existed as well.

This is a light view of the ancient world of Jerusalem, involving customs, beliefs, and cultural aspects that existed in Jerusalem earlier and in Late Antiquity. As always, I’m amazed at the political turbulence, dramas, and societal developments taking place and driving this period toward the medieval era. Through the strife, Jerusalem and Israel have survived and made an impression on the world.

Simon Sebag Montefiore wrote in his biography, Jerusalem, ‘Life in Herodian, Crusader, or British Jerusalem was always just as complex as life is for us today. There were quiet evolutions as well as dramatic revolutions.’ 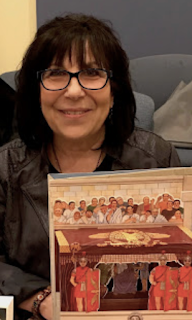 Cynthia Ripley Miller is a first generation Italian-American writer with a love for history, languages, and books. She has lived in Europe and traveled world-wide, holds two degrees, and taught history and English. Her short fiction has appeared in the anthology Summer Tapestry, at Orchard Press Mysteries.com, and The Scriptor. She is a Chanticleer International Chatelaine Award finalist with awards from Circle of Books-Rings of Honor and The Coffee Pot Book Club. She has reviewed for UNRV Roman History, and blogs at Historical Happenings and Oddities: A Distant Focus and on her website, www.cynthiaripleymiller.com

Cynthia is the author of On the Edge of Sunrise, The Quest for the Crown of Thorns, and A Sword Among Ravens, books 1-3 in her Long-Hair Saga series set in Late Ancient Rome, France, and Jerusalem. Cynthia lives outside of Chicago with her family, along with a cute but bossy cat.