It is with the greatest of pleasures that I welcome historical fiction author, M J Porter, onto the blog to talk about the inspirations behind her latest book…

The First Queen of England
The tenth century Anne Boleyn 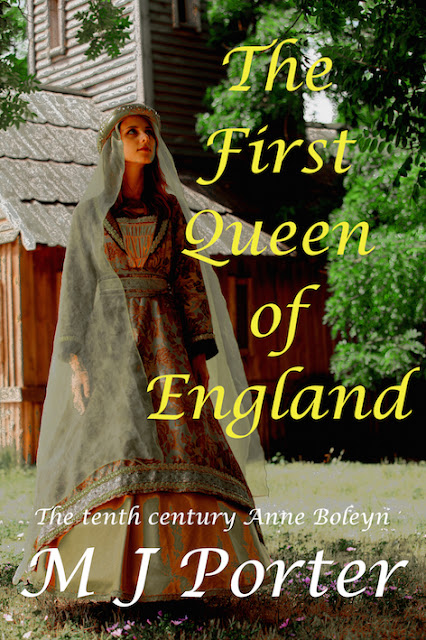 In fulfilment of her husband's dying wishes, the bereaved Elfrida seeks out the youthful King Edgar, and falls passionately in love with him, despite the fact he's already married. With the King reciprocating her feelings, the pair decides to make use of what they can in order to marry; the churchmen, the nobility; the factions vying for his good will. But just when she believes she's achieved all that she wants, the King's past resurfaces and threatens all that she's worked for.

I have written a number of series based in Anglo-Saxon England (In chronological order they are Gods and Kings, Chronicles of the English and The Earls of Mercia), and one of the biggest problems is a lack of visible women. This doesn’t mean they didn’t exist, but they are little mentioned although they had a much better place in society than many might well think, confusing Anglo Saxon England with the Medieval period when women were very much badly served by their men.

I’ve written almost exclusively about men in the past, but the story of Queen Elfrida presented an opportunity to both focus on the women of the period, and offer a slightly more ‘romantic’ take on the period. Why? It was nothing that I did, but rather an appreciation that during the 960’s there’s a huge mingling of three different generations of powerful women at the court of King Edgar and they all had their own story to tell. Elfrida was simply the focus of this particular story because ultimately she does become the first crowned queen of England, her predecessors either being crowned queen of Wessex or queen of the Anglo-Saxons, but all these women would have had a prominent position at the King’s court. I enjoyed working out the family dynamics and who would have politically ‘liked’ who. It also presented an opportunity to present the Anglo-Saxon people in an unwarlike setting. This is rare as war, whilst not constant, was a near constant threat.

And as with almost all my novels, it also gave me the opportunity to try and present a more ‘neutral’ image of Elfrida. In later history her reputation was to suffer greatly, and sometimes it’s a revelation to peel back the layers of history and try and make a stab at some sort of truth. And much like Anne Boleyn, many centuries later, she also has the reputation of snagging the eye of a king who was both already married, but a little lacking in children. Coincidentally, King Edgar’s reign is also most often characterized as a time of religious upheaval, and while it might not have come about as a means of gaining a divorce (divorce seems to have been much easier in the Anglo-Saxon period and quite often the right of the woman to instigate) it meant that Elfrida was at Court at a time of unease and also very powerful religious men who had the ear of the king and who the king welcomed.

The story of Elfrida also allows me to ‘link’ two of my series a little better – The Chronicles of the English ends in 946 whereas The Earls of Mercia begins in 994.
All in all, Elfrida’s story was one that I thought needed to be told. It’s about time that the study of English history began long before 1066, and if it takes a little touch of fiction to work that magic, then I will happily provide it.

I'm an author of fantasy (viking age/dragon themed) and historical fiction (Anglo-Saxon, Vikings and the British Isles as a whole before the Norman Conquest), born in the old Mercian kingdom at some point since the end of Anglo-Saxon England. I write A LOT. You've been warned!

My first historical fiction novel, Ealdorman, is about to be published by Endeavour Press, and all of my other stories have been indie published through Amazon and Smashwords.