Today author Lesley Wilson is talking about the inspirations behind
Oric And The Alchemist's Key. 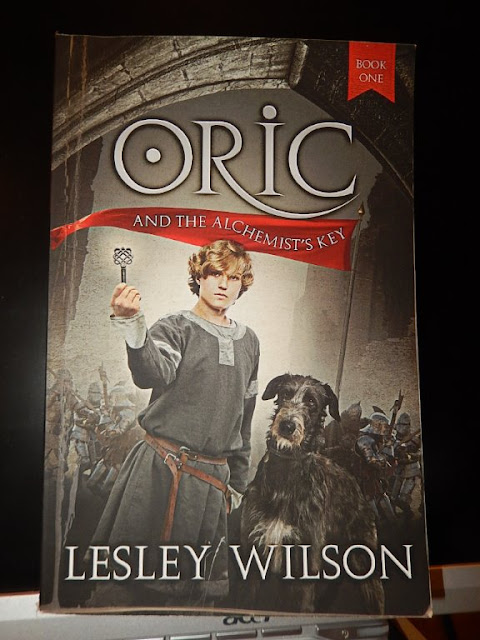 Fourteen-year-old orphaned boy, Oric, inherits a key from alchemist Deveril. Moments before the old man dies he hints that the key will unlock the secret to great wealth. He also warns of terrible danger should the key fall into wrong hands.

Evil moneylender Esica Figg determines to steal the key from Oric, even if it means killing the boy in the process.

Ichtheus the apothecary and kitchen maid Dian team up with Oric to help solve the mystery behind Deveril’s key. They experience many adventures, some hilarious, some life threatening. The trio is helped, but more often hindered by comical wolfhound Parzifal, and a donkey named Braccus.

What was your inspirations behind Oric?

As a young girl I read a book with a medieval slant and was immediately hooked on the genre. Handsome knights and their ladies, squires, villeins and serfs fired my imagination. Historical sites in North Yorkshire, where I grew up, are varied and plentiful and, long before I began writing my own books, I explored towns and villages, ruined castles, abbeys, and museums. Memories from my early youth were topped up when I returned to the country of my birth from Australia in 2014. I spent three months indulging myself in medieval history. The following places provided me with the skeleton on which to construct my first book.


Kilton Castle in Cleveland is not particularly notable in the annals of history but, surrounded by bluebells as it was at the time of my visit, it proved heady stuff for a romantic teenage girl. The ruin sits on top of a substantial mound and is surrounded by deep, wide ditches - sure deterrents for the most tenacious of medieval marauders. I was able to pick out the outline of the Great Hall and dreamed of the banquets that must once have been held there. Small iron-barred windows and narrow slits built for the use of archers were visible in the Norman watch tower. On my first visit to Kilton Castle over 50 years ago, the ruin was open to anyone that wanted to climb the hill. I understand that a permit must now be obtained to visit the site.


Guisborough, mentioned in The Doomsday Book, provided me with a home for a several years and I enjoyed wandering about the ancient wynds and lanes that lead off the cobbled high street. The town’s original Augustinian priory, founded in 1119, burned down during the 13th century and was replaced with another building in Gothic style. Only the east end of the priory church now remains, and its iconic arch forms an impressive landmark for twenty-first century Guisborough. A twice-weekly market, originally attended by farmers and country folk who sold and bartered their animals and home-grown products, dates back many years, though I have been unable to detect exactly how far.  The hustle and bustle of this delightful market town was mana from heaven to a budding author, and I imagined the busy high street as it might have looked almost 1000 years before.


Helmsley Castle built in the early 1100s was originally constructed from timber. In 1186 Robert de Ros began converting the castle into stone. Between 1258 and 1285 the east tower was raised and a new hall and kitchen were added. This castle inspired me to write about a grand manor house and its new beginning after fire razed the building to the ground.

St Hilda, Abbess of Whitby Abbey (c680), whilst journeying home became thirsty. She stopped in a churchyard and prayed for water. Legend has it that a well immediately appeared beside her. The village was named Hinderwell in the Saint’s honour. The water is said to have beneficial healing properties and a clear spring is still visible today. For a short time I lived in an old farmhouse on the cliff top at Port Mulgrave, Hinderwell.  Walking home from a dance in the next village one dark night, I took a short cut through the St Hilda’s churchyard. What appeared to be a ghost frightened me half to death. I recall the adventure as if it were only yesterday, and used the experience to write about a fictitious, medieval church with a haunted graveyard.
The ancient town of Whitby, famous for Captain Cook and HM Bark Endeavour in which he sailed to Australia, is the home of a Benedictine abbey. The abbey, founded in 657 AD by an Anglo-Saxon King of Northumbria, disestablished during the Dissolution of Monasteries, sits on the clifftop overlooking the fishing port of Whitby and the North Sea. 199 steps lead from the harbour up to the abbey, but a road suitable for motor vehicles is available for the faint hearted. My husband’s family owned and ran a wood yard in the older part of the town and were amazed to discover a false wall at the back of the workshop. The partition was removed to reveal several carved-oak, ship’s figureheads dating back several hundred years. To this day not much has changed in that old part of town. I close my eyes and listen to the gulls haunting cries and I am transported back in time. Such intense feelings for the past are grist to my writer’s mill and I hope the passion I feel manifests in my writing.  My characters experience many adventures in a place very similar to Whitby, and the wild Yorkshire moors and windswept beaches provide more colour and drama for the period in which my books are set. When running a small maritime museum in Australia, I researched the history that surrounds Whitby and put in a display depicting the old town, its history and the part Cpt Cook played in claiming Australia for king and country. My dream is to share that wonderful past and bring to life the all fascinating places and people that fired my imagination.
The catalyst that finally inspired me to write about medieval times? Retirement, and a small figure of an apothecary I made on a wire armature. I named him Ichtheus and gave him an apprentice called Oric. Thus my medieval adventure began. 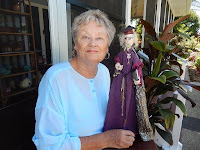