The Idylls of Kings - A Victorian Camelot?

“This madness has come on us for our sins.”
Idylls of the King.

As I have said before, there is something so appealing about King Arthur and his Knights that their story has become - I am not too sure how to express it - timeless?

The story, the legend - as it is now- has ancient roots, dating back to the 4th and 5th Centuries. The tales, traditionally oral in the telling, have been fascinating every generation from the very beginning. Can you imagine being some of the first people to sit and listen to the tales of Arthur? It must have been captivating.

We can surmise, that for a story to become so popular, it must have had a very good beginning.

Just take a look at some of the great bards who, through the centuries, have retold the tale. Nennius, Bede, Monmouth, Malory - to name but a small handful - have in their way, shaped the stories of Arthur and his Knights. And we love them for it.

Well, lets just check out one of his most famous poems...take a gander at this.. 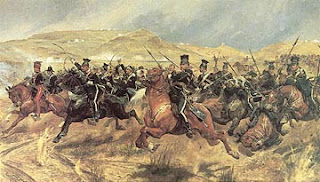 Charge of the Light Brigade by Richard Caton Woodville, Jr

Recognize him now? Good. Tennyson also wrote the Idylls of the King (first published in 1859) and that is what I am interested in. It is said that Tennyson was under a great amount of pressure to compose a poem of epic proportions. It is hardly surprising that Tennyson turned to the greatest British hero who ever lived, to draw inspiration from. And on the plus side...everyone loves a good King Arthur story. It was bound to be a hit!


Tennyson drew from the works of Malroy and the Mabinogion. The Idylls is actually split into parts - each dealing with a different aspect of the Arthurian tale - but with a slight Victorian twist on the story!

I am not going to go into too much detail of the Idyllas as a whole, for it would take too long and this post would go from being a few minutes read to an hour - and I am sure you have something you really should be doing, so I will keep it as short as I can. Needless to say, Tennyson drew on the usual cast-list  - Arthur, Guinevere, Lancelot, Merlin.. they are all there.  What I am going to do is just take a quick look at a few of my favourites.

The Coming of Arthur

There would be no Camelot without Arthur and this is where Tennyson's story begins. Britain is divided into waring principalities. Aurelius and Uther, had tried to unite the kingdoms, but they were not successful. It was only Arthur, who could bring unity to a divided land.

"...And through the puissance of his Table Round,
Drew all their pretty princedoms under him,
Their king and head, and made a realm, and reigned."

As one would expect, this first Idylls tells off Arthur coronation, his accession and his marriage to Leodogran's daughter, the fair Guinevere. The future is bright. Arthur is portrayed as the perfect man - someone to aspire to.

Surprisingly,  Arthur isn't in every episode of the Idyll, but his influence / or presence, what ever you want to call it, most certainly is!

Oh the wows of the youngest son. This is one of my favourite stories. Gareth, brother to Gawain, starts life in Arthur's court disguised as a kitchen boy!

'So Gareth all for glory underwent
The sooty yoke of kitchen-wassalge;
Ate with young lads his portion by the door,
And couched at night with grimy kitchen-knaves.

And that is only the beginning of the adventure. I posted about Sir Gareth not so long ago - you can read his story...here! Needless to say, it is full of noble quests, adventure and a woman! 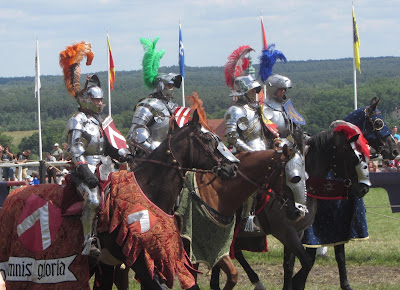 'What fools those mortal's be....' Shakespeare 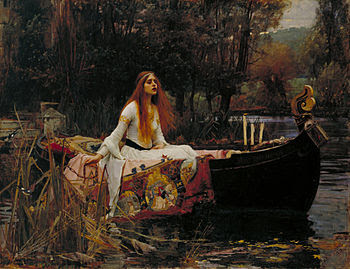 Once upon a time, Arthur came across two skeletons - one of which was wearing a crown which had nine diamonds. Arthur helped himself to the diamonds and at the annual tourneys, he awarded a diamond to the tournament winner.

Well, no one could fight in tournaments as well as Lancelot. He won the previous eight. Guinevere makes an excuse not to attend the ninth tournament and Lancelot does also. Fearing that the court will put two and two together, Lancelot agrees to attend the tournament, but in disguise. To aid his disguise, he agrees to wear Elaine's token of favour - which is something he has never done before "for any woman."

Elaine admits her love to Lancelot, but when he tells her that their love can never be - she wishes for death. She dies.

Guinevere has a tantrum when Lancelot presents her with the diamonds. She throws them out the window - one of the diamonds falls on to Elaine's funeral barge - the diamond then slips into the water- thus fulfilling Elaine's strange dream.

Lancelot fears he has made the most monstrous mistake. He should have returned Elaine's love. He fears that Guinevere's love has turned bitter with jealousy. He wishes himself dead. Pleasant..isn't it??!

I think, even by these brief extracts of Tennyson's work, we can see the influence it has had on modern interpretations of the Arthurian story. I am going to leave it there for today, but no doubt I will come back at a later date and talk more about this very interesting 'epic' poem!