"Finally, you will get all that you deserve, old friend."
Merlin


There is always one bad apple in every family - unfortunate for Arthur, the rot seems to run rather deep in his. 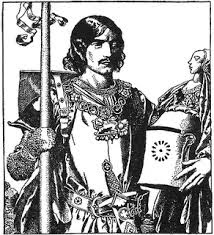 Sir Agravain, is yet another son of King Lot of Orkeny and Morgause (Arthur's sister), which makes him the brother of Sir Gawain, Sir Gaheris and Sir Gareth as well as being a half-brother to Mordred. He is, therefore, Arthur's nephew.

Sir Agravain is a complicated character, in the early works he is described as a handsome, tall man, who was a reasonable fighter and sometimes, when the mood took him, partook in heroic deeds. He is generally considered a respectable knight from a noble family.

His portrayal isn't always very flattering. In the Vulgate Cycle he is portrayed in a darker light. He has a "somewhat misshapen" body - which always reminds me of the portrayal of Ricahrd III in Shakespeare's play of the same name.  Sir Agaravin may be "...a fine knight..." but he is "...arrogant and full of evil words..." It is not surprising then, that he and Mordred get on so well.

Despite his brother, Sir Gawain's, warning - Agravain, along with Mordred, is responsible for exposing Guinevere's affair with Lancelot. Which kind of implies that Gawain probably had a good idea about what was going on, but he chose to turn a blind eye to what was, High Treason. Why? Maybe it was because he and Lancelot were such good friends.

In some versions of the story, Lancelot kills Agravain when he rescues Guinevere from the pyre at her execution. Strangely, Gawain does not seem to be to aggrieved by Agravain's death - it is only because Lancelot kills Gaheris and Gareth that Gawain seeks revenge.

In T.H.White's The once and Future King (1938), as well as the Pre-Raphaelite poem, The Defence of Guinevere, Agravain is portrayed as a murderer - he killed his own mother.

In the BBC drama, Merlin (2008 -2012) , Agravaine (a variant spelling of Agravain) is portrayed as Arthur's uncle who is secretly working with Morgana to overthrow the Pendragon's. He is manipulative, sly and cruel.

What hope did Arthur have, when those to closest to him were determined to see him and his kingdom...fall?
Posted by Mary Anne Yarde at 11:52