Threaten To Undo Us by Rose Seiler Scott has a new cover! I reviewed this book, not so long ago and I have to admit, it blew me away. Fantastic read. So when Rose said the cover was having a make-over I just had to share it with you.  If you would like to read my review of Threaten To Undo Us, you can do so...here!

Let's take a look at the new cover. 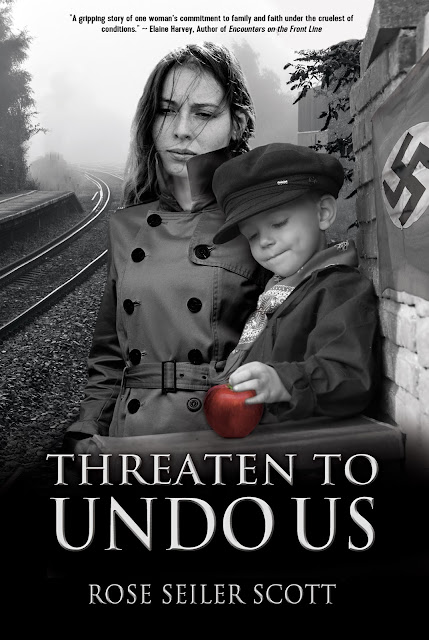 “Allied forces are advancing. You are no longer under the protection of the German army. All German citizens of the Third Reich are to evacuate.”

At these words, Liesel and her young children are forced to flee their home. But losing the only home she has ever known is only the beginning. The brutal advance of Stalin’s forces into Poland results in a regime of terror and uncertainty, threatening to destroy Liesel’s family at every turn. Interrogated and imprisoned in a labour camp, her dream to re-unite with her husband and children seems impossible. Her only hope?  A dangerous gamble, buoyed by a sliver of faith.

Based on a true story, Threaten to Undo Us exposes shocking history in the shadow of World War Two.

Where can you purchase this fabulous book?
Amazon US
Amazon UK
Amazon CA
Promontory Press

Rose is the author of THREATEN TO UNDO US (MAY 2015) and a contributing author in HOT APPLE CIDER WITH CINNAMON (OCT 2015). Since fifth grade, Rose has known she liked to write, but her career path took several turns including bookkeeping, piano teaching and mother of four.  As a compelling family story unfolded over the years, Rose was pulled into writing a novel that is the result of years of research, revealing a history that few in the Western world are familiar with. During the process she came to realize that not only is truth stranger than fiction, but truth can also be told through fiction.

Rose’s book was short-listed for this year’s Chaucer Awards in Historical fiction. She won a His imprint award for a short story in 2013 and was short-listed for a Word Guild Award in 2012.
A longtime resident of “the other Surrey” in BC, Canada, her reading tastes include historical fiction, biographies, memoir, literary and inspirational.
You can find Rose at her blog www.roseseilerscott.com, FB Author Page: Rose Seiler Scott, Twitter: @RoseSeilerScott and Goodreads: https://goo.gl/4zfofH