The Idylls of the King - A Victorian Camelot Part 2

Last time we started to looked at Alfred, Lord Tennyson's, The Idylls of the King -- if you missed the post you can read it here!


"O Lancelot, if thou love me get thee hence."And then they were agreed upon a night(When the good King should not be there) to meetAnd part for ever." 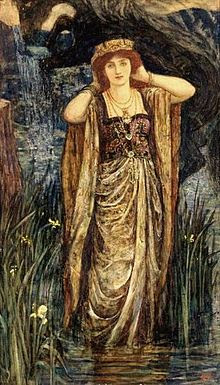 For the good of Camelot and to save her own reputation, Guinevere decides to end her affair with the noblest of knights. But there are many spies at court and their farewell is witnessed by Mordred.

Guinevere seeks sanctuary at the convent in Almesbury - she refuses to reveal her identity, but she does befriend a young novice.

But even the sanctuary of a convent can not protect Guinevere from who she is or what she has done. She learns that Arthur and Lancelot are at war, then later she hears of Mordred's usurpation.

Her friend, the novice, innocently describes about the glorious kingdom in her father's day....

"..before the coming of the sinful Queen..."

Arthur comes to her. She falls to his feet in grief. Arthur forgives her. Guinevere remains in the abbey, later becoming an Abbess.

And finally, lets take a look at...

The Passing of Arthur

"...To war against my people and my knights,
The King who fights his people fights himself..."

Arthur kills the usurper, Mordred, but in turn, he receives a mortal wound. 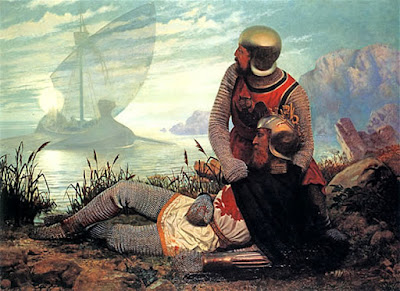 The Death of Arthur, by John Garrick 1862
Scattered on the battlefield are the bodies of his knights. Only Sir Bedivere has made it through the fray.  Sir Bedivere carries Arthur to Avalon. Arthur commands Bediever to throw Excalibur back into the lake. Bedivere is reluctant to throw such a great sword into a lake, but eventually he obeys this last order from his king. He watches with astonishment as the Lady of the Lake, takes back the sword.  Arthur dies.

The Idylls of the King - A Victorian Camelot? 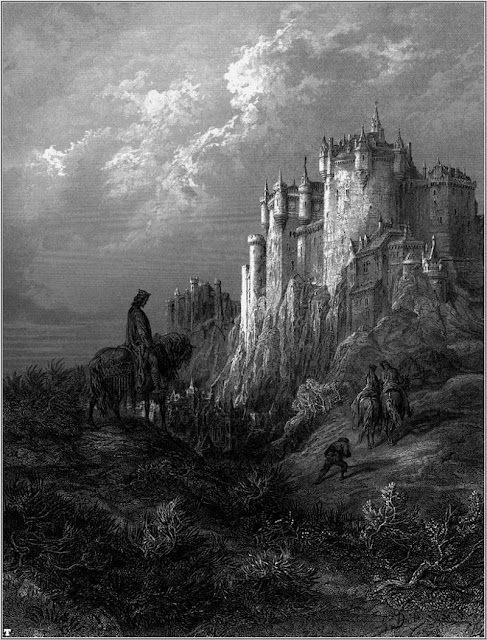 Gustave Doré's illustration of Camelot for Alfred, Lord Tennyson's Idylls of the King 1868

There was a great deal of interest in the notion of courtly-love back in the Middle Ages - this 'idea' was once again embraced in the Victorian era.
Arthur is portrayed as the "ideal man" with Victorian values. His Camelot is a Victorian one.
I have never felt truly comfortable with Arthur cast in this roll.  He is the '...blameless..." one. He could do not wrong.
It is Guinevere's immorality that brings down the kingdom - it had nothing whatsoever to do with Arthur - because he was just so...perfect?!
Likewise, at the final battle, everyone, apart from Sir Bedivere dies...? I have never really bought that ending and I don't think I ever will - which is partly why I wrote The Du Lac Chronicles in the first place. Still, its a good poem...isn't it??!