Regency Romance author, Vanda Vadas, is on the blog today to tell us about her latest book. 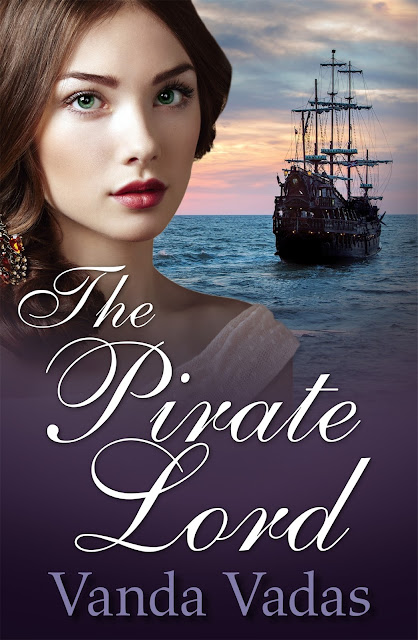 Can love for his beautiful, aristocratic captive rescue Miles from his lust for revenge?

A family tragedy steeped in deceit and betrayal saw Lady Eloise Blakely vow never to fall victim to a man's charms, let alone invite him into her bed. Until fate swept her aboard a pirate's ship and into its captain's embrace.

Yet when he reveals a dark secret, her lover becomes her enemy...

Ten years ago, Miles Zachary Fenton was framed for murder. For so long he has fought to clear his name and reclaim his dukedom. Now, when both appear to be just within reach, he is forced to abduct a meddling beauty, one who wreaks havoc with his emotions and complicates his plans...

Let's take a look inside the book...

He opened the cabin door and spied her sitting by the galley window. She whipped her head around and shot to her feet at the sight of him. She was mistaken if she thought that drawing the blanket tightly around her would somehow ward off his reprimand.

He shoved the door closed and secured the latch.

‘Do you have any idea what your act of defiance might have cost?’

Her gaze fell to her feet. ‘Your life.’

She flopped back down on the chair, guilty as charged, with her chin on her chest.

Seething, Zach stepped towards her. ‘And the third life you endangered?’

Her head snapped up. ‘There was another?’

Remorse-filled eyes did nothing to calm the thunder in his veins. ‘It could have been you who’d been swept out to sea! I wouldn’t have known a thing about it. Life and death was at the whim of Mother Nature.’

‘She let me live,’ Eloise muttered.

‘That’s no excuse for you to disobey my order to stay in this cabin!’

In his mind’s eye he saw Eloise tossed overboard and swallowed up by the sea, the only mistress he’d learned to predict. Like a crazed, jealous lover it sucked her under and denied her the breath of life.
Denying him the possibility of a wife and ch–

He spun on his heels and retreated to the opposite side of the cabin lest he speak the delusional sentiment aloud.

She blurted out an earnest-sounding apology. ‘I’m sorry! I heard someone yell man overboard. I had to be sure it wasn’t you because . . . if anything were to happen to you . . .’

Ridiculous to think she genuinely cared for him. ‘You need not fear, Eloise. Should anything befall me, then by chain of command you’ll be safely returned to England. You have my word on this.’

He strode back, his large frame looming over her. ‘I want your word that in future you’ll do exactly as I instruct. You’ll obey orders just as my crew must. You’re my responsibility as much as them.
‘I cannot be your guard or chaperone every minute of the day and night. When I ask you to do something, it’s for a reason and with purpose. You might successfully navigate your way around the mores of society and ballrooms, but do not presume to know or understand the perils and pitfalls of life at sea or aboard my ship. Is that clear?’

Her eyes brimmed with tears, making the green irises all the more brighter. Dark shadows beneath her lower lashes lent a haunting look to her pallid skin. ‘I deserve your censure, but if your life was threatened I would again seek to do everything possible to assist you.’

He seized her shoulders and hauled her to her feet. ‘I forbid it!’

Courage returned in the upward tilt of her chin. ‘Then punish me as you would punish any man who disobeys you.’

Stunned, his hands fell away from her shoulders. ‘Punish you?’

Her eyes softened and she tentatively raised a hand to his cheek. ‘I couldn’t bear to lose –’ Her hand retracted and covered her mouth to stifle a sob. Her lids closed, squeezing the tears from her eyes.

It suddenly hit him. She’d left the cabin in search of him. Not to deliberately flout his authority, but driven by the same fear as his.

The fear of loss.

Good God! He couldn’t possibly mean anything of consequence to her. He tried hard to ignore welling emotion; told himself to walk away, deny the need to take her in his arms and hold her close. He tried to drive from his mind the compulsion to never let her go. Futile!

He couldn’t bear to see her upset. With a curse he took her face in his hands, pressed his lips to her forehead and stroked her still-damp hair. ‘Don’t cry, Eloise.’

She clasped her arms about his waist. The intimate contact proved his undoing. ‘I thought I’d lost you.’ The breath of his hoarse whisper feathered her lips. He inhaled her breath as if it were his own. ‘Don’t ever risk your life for me. Swear it!’

‘No.’ She shook her head, the movement sweeping her mouth over his.

‘You will do as I say.’ He pressed his lips to hers and gave no quarter for her to refuse the command.
She moaned, surrendering her response.

Where can I purchase this fabulous book?

Before residing in Australia, Vanda's birthplace and early childhood years were spent in Papua New Guinea. At the age of eleven, a holiday in England sparked an interest in the days of old. Castles, ruins, and discovering Jane Austen novels inspired a life-long interest in all things historical, a passion that later kick-started Vanda's desire to write historical romance.  Vanda has studied and worked in the field of Education, teaching Literacy and Numeracy to children and adults. She's also worked as a PA, a recruitment consultant and now in home furnishings.  Her two children, of whom she's immensely proud, have flown the coop and are successfully making their own way in the world.  Vanda and her husband live on the Gold Coast in Queensland where they enjoy walks along world-renowned beaches or a quiet getaway to the lush hills of the Hinterland.