It is with the greatest of pleasure that I welcome Jayne Castel back onto the blog again. Jayne write the most beautiful Anglo-Saxon romances. I reviewed one of her novels, The Breaking Dawn, earlier on in the year and I absolutely loved it. You can read the review here.

Today, Jayne is going to tell us about the inspirations behind her latest novel...

Let's check out the book... 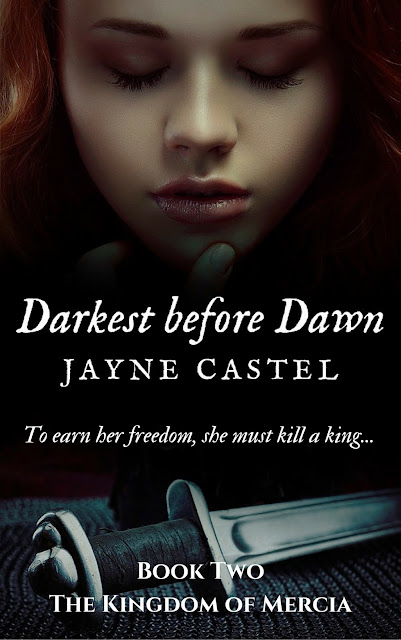 BRITAIN - 655 A.D.
Princess Alchflaed of Northumbria is a spirited young woman who wishes to choose her own path. Unfortunately, highborn women in Anglo-Saxon England have no say in their choice of husband, and her father promises his daughter to the son of his bitterest enemy.
This attempt at 'peace weaving' is not what is seems. Alchflaed's father orders her to murder her new husband. Charged with this treacherous task, she journeys south to her new home in Mercia.
Maric – a seasoned warrior with a dark past – leads her escort. Princess and warrior find themselves strongly drawn to each other, but they must deny their feelings. Both bound by loyalty, neither can choose their own fates.
Alchflaed's father has given her a terrible choice: to earn her freedom, she must kill a king.
Could you tell us about your inspirations behind your latest book...


I have always loved Anglo-Saxon England. The myths, the language, the history – all of it.


When choosing a period within this era to set my stories in, I was particularly drawn to 7th Century Britain. This was a crucial century. It was just before the Vikings began raiding the British coast, and long enough, after the Romans had left, for a true local culture to emerge.
During the 7th Century, Britain was split into rival kingdoms. The Kingdom of the East Angles dominated at the beginning of the century, before the Kingdom of Mercia rose in power. Then, the Kingdom of Northumbria emerged as a real force over the final years.
DARKEST BEFORE DAWN is Book #2 in the Kingdom of Mercia series and, like my other stories, it is based around actual historical figures. What makes this novel different to all the rest is that I have used a real female historical figure in this book. The historical records of this period largely come from the writings of monks, who apart from mentioning female saints, wrote little about the women of the time.
However, Princess Alchflaed of Northumbria was different.
She was the daughter of Oswiu of Bernicia, a 7th Century king of Northumbria. In order to ‘peace-weave’ between Northumbria and Mercia, Alchflaed’s father arranged her marriage to Mercia’s new king, Paeda of Mercia.
Now, I can’t reveal anything else about what happens to Alchflaed (as I risk spoilers!) but let’s just say that the story’s plot is also based on actual historical events – with a bit of artistic licence from me thrown in!

Grab a free copy of Castel's, Dark Under The Cover of Night. 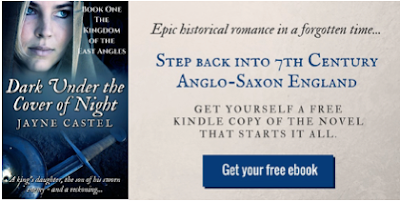 JAYNE CASTEL writes Early Medieval Historical Romance and Historical Fiction set in 7th Century Anglo-Saxon England.
Two of her novels DARK UNDER THE COVER OF NIGHT and NIGHTFALL TILL DAYBREAK, reached the quarter finals of the Amazon Breakthrough Novel Awards in 2013 and 2014.