The Holy Grail and Arthurian legend

“Four Hundred and Fifty Years Have Passed Since The Passion Of Our Lord Jesus Christ: And On The Day Of Pentecost This Seat Shall Find Its Master.” 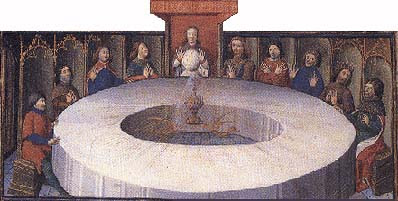 Without a doubt the most famous, and probably one of most endearing story that comes from Arthurian literature is the quest for the Holy Grail.

I have to admit, I have been a little bit cautious about posting about the Grail, as it is generally, a very delicate and thought provoking subject - which encourages very strong opinions and emotions. I am going to approach this post by explaining how The Holy Grail came to be connected with Arthurian Legend.


Firstly...what is The Holy Grail?

The Holy Grail is said to have been the cup that Jesus used during the Last Supper - which, incidentally, was the last meal Jesus ever had with his disciples before he was crucified. The Grail, it is said, was also used to catch the blood of Jesus when he was stabbed in the side while hanging from the cross. But no one knows what happened to it after that.

There is a story that Joseph of Arimathea bought the Grail cup to Briton and hid it. It's hiding place remained a secret for centuries. The hunt for the Grail became the principle quest for Arthur and his knights. Yes, they rescued maidens from villeins, battle dragons and Green Knights, and rode around the country doing great deeds, but it was the Grail that was at the forefront of the the knights minds.

Who would be the one to find it?

Many of the stories we take as truth can be linked back to a French poet, Chrétien de Troyes.
Troyes's work was incredibly influential - it is Troyes that introduced us to Lancelot and the love triangle. It is Troyes that first introduced the idea of the knights quest for the Holy Grail and the knight that would find it - Percival.

If nothing else, Troyes certainly sparked the imagination of the populace, for what could be more romantic than these chivalrous, heroic knights, searching for the sacred cup of their religion?

Robert de Boron goes into even more detail when he takes up the story. He explains that the Grail was this holy cup - or Chalice - used by Jesus at the last supper and at the crucifixion.

But it was Vulgate Cycle (Lancelot-Grail), which was written in the 13th Century by an unknown author that really cemented the Grail quest with Arthur and his knights.

The central character of the story is Lancelot. And instead of Percival being the ultimate Grail hunting knight, it is Lancelot's son, Galahad.

Let me tell you the very abridged version of events.

Whitsunday (the eve of Pentecost), Camelot.

When a beautiful woman comes to Arthur's castle and asks Lancelot to take a walk with her into the woods, who was he to say no? She leads Lancelot to a nunnery - I guess that wasn't quite how he thought this date was going to go, but there you are. Waiting for him, at the convent is his two cousins, Sir Bors and Sir Lionel. The nuns then present a young, handsome man and ask if Lancelot would be so kind as to knight him. Goodness knows what was going on in Lancelot's head as these strange events unfolded, but who was he to disagree with the nuns? He knights the youth. Bors, remarks that the young man look remarkably similar to Lancelot. Lancelot takes a closer look and concludes that this is his child. 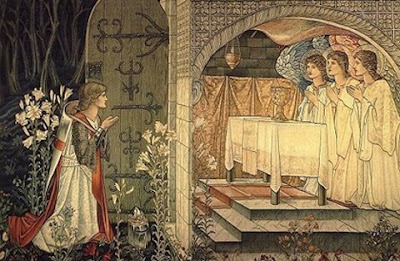 Arthur summons all of his knights to the Round Table. There is a chair at the table that is not to be sat on (the Siege Perilous), for it is waiting for that one special knight who would find the Holy Grail.  The chair was waiting for Galahad and now Galahad is here, he can take his place among these chosen few.

An image of the Grail appears and floats above the table. It was time for Arthur's knights to find the Grail. It is the greatest of quests and many knights die along the way. At all times Galahad is hailed as the purest of best knight of them all.

Galahad spends much of his time alone, hunting for the Grail, but he does finally meet up with Bors and Percival. Percival's sister shows them where the Grail ship is, but unfortunately she dies and Bors offers to take her body back home.

Galahad has a vision and he sees things that no mere mortal man could ever imagine. He now knows where the Grail is and what he has do with it. He explains that the Grail is in Britain, but despite the code of chivalry, Camelot is unworthy of it. The Grail has to be taken to Sarras in the Middle East - this is a command from God and must be obeyed.

The Grail is on the ship, waiting for them, and they take it to Sarra's. They watch in amazement as the cup is lifted to the heavens.

Galahad, after seeing the Grail, makes a rather odd request that he may be allowed to die at a time of his choosing. After a visit with Joseph of Arimathea which is truly glorious, he makes his request to die. He says goodbye to Percival and Bors and the angels take him to heaven.

The Grail has never been seen on earth, from that day to this.

What did the church think of this story?

The idea of a magic cup - cauldron - was a very common theme in Celtic myths, not so much the Bible.

It was, in short, a pagan tale that was rewritten by a French poet.

So over to you...what do you make of it?

Email ThisBlogThis!Share to TwitterShare to FacebookShare to Pinterest
Labels: Arthurian Legends, Fisher King, King Arthur, King Arthur and the Knights of the Round Table. Arthur's Round Table., The Holy Grail