"...it is right by the sea, and surrounded by the sea on all sides; and there is no other way into it, except that provided by a narrow rocky passage—and there, three armed warriors could forbid all entry, even if you took up your stand with the whole of Britain behind you..."
Geoffrey of Monmouth 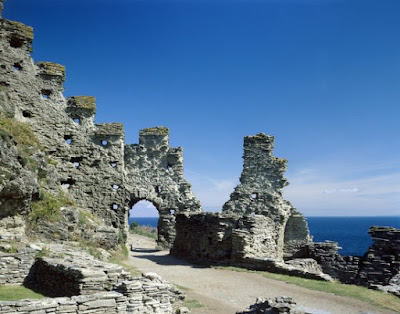 This is quite an achievement. I have spent the last 6 months blogging about Arthur and his Knights, but I have failed to mention Tintagel Castle. Why? I hear you ask...Truefully, I just haven't got around to it until now. I know, poor excuse, but hey, I am on it!
Tintagle Castle is located on the peninsula of Tintagel Island in Cornwall. It is a medieval fortification, built by Richard, Earl of Cornwall in the 13th Century. The castle became a tourist attraction in the 19th Century when archeologist started to excavate the site. In the 1930's a team of archeologists discovered a much earlier high status building. But what does this have to do with King Arthur and his Knights? 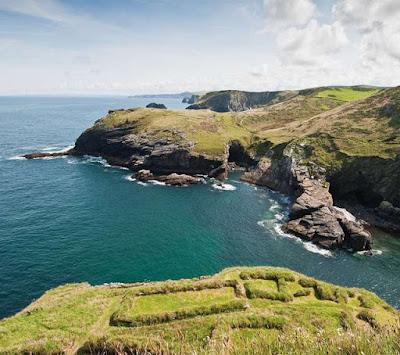 Well...a certain Welshman wrote a certain book, you may have heard of it...It goes by the name, The History of the Kings of Britain. Yes, that's right, I am talking about Monmouth yet again!!
Can you remember the story about Uther Pendragon falling madly in love with the Duke of Cornwall's wife? No?  Okay, quick recap...
***
King Uther Pendragon holds court, and there he meets Igrain, the wife of Gorlois, Duke of Cornwall. Uther is driven almost out of his mind with lust for Igrain. He cannot help but make his attraction known. But Igrain loves her husband and tells him of Uther's pursuit. Gorlois whisks his wife away from court and they head back home to the safety of Tintagle Castle.So great is Uther's lust that he follows her home, and while Gorlois is out fighting in a noble battle, Uther asks the great sorcerer, Merlin, to disguise him as Gorlois. Thinking Uther is Gorlois, Igrain makes love to him. That very night, Gorlois dies.
*** 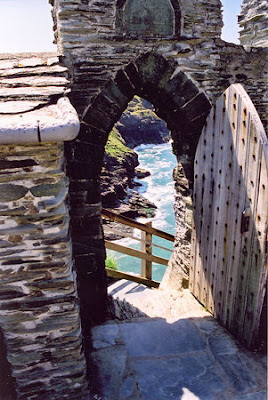 So, if we believe Monmouth's versions of events ( and there is not reason not to...he did, after all, have that ancient manuscript that he conveniently lost ) Arthur was conceived at Tintagel. Monmouth never suggested that Arthur was born at Tintagel, neither did he mention Arthur ever visiting the place..but you know what it's like when poets get hold of a story! As the years passed, Tintagel became embroidered into the delicate tapestry which is Arthurian Legend.

But still, there are those who want proof - something that they can see, that they can touch. If Arthur was at Tintagle then surly there would be evidence?

Ralegh Radford (1900 -1999) an English archaeologist whose interest was in Dark Age Britain, had this to say about Tintagle and Arthurian legend in 1935.

"...no concrete evidence whatsoever has yet been found to support the legendary connection of the  (Tintagel) Castle with King Arthur..."

"...there simply is no independently attested connection in early Cornish folklore locating Arthur, at any age or in any capacity, at Tintagel..."

But how does this explain the Artognou stone? "patern coli avi ficit artognou"
"Artognou, father of a descendant of Coll, has had this constucted"

The stone's discovery in 1998, met with much media excitement. Had evidence of Arthur been found at last? Did the name Artognou really translate as Arthur? The stone is of the right age and, if Monmouth is to believed, then Arthur was conceived at Tintagle - at last, here is the proof.

Of course there were plenty of people to discredit such a notion - including many historians. I guess, like with everything else when it comes to Arthur and his knights, it depends on what you believe. And thats why Arthur and his world drew me in in the first place...the endless possibilities.
Posted by Mary Anne Yarde at 07:14

Email ThisBlogThis!Share to TwitterShare to FacebookShare to Pinterest
Labels: Arthurian Ledgend, King Arthur and his Knights of the Round Table, Myths and Legends, Tintagel Castle