Merlin's Cave and Idylls of the King

“Wave after wave, each mightier than the last,
Till last, a ninth one, gathering half the deep
And full of voices, slowly rose and plunged
Roaring, and all the wave was in a flame:
And down the wave and in the flame was borne
A naked babe, and rode to Merlin's feet,
Who stoopt and caught the babe, and cried "The King!
Here is an heir for Uther!" 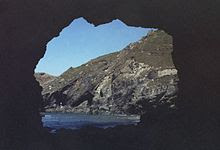 There is a cave – a mystical magical place - that is situated in the South-West of Britain, underneath the famous Tintagel Castle.

The sea has carved this cave, in a way only the sea can, slowly, but with persistence. Unlike us mere mortals, the sea is in no hurry, she has no concept of time.The floor of the cave is covered in sand, a place of refuge, perhaps?…Or perhaps not, for at every high-tide, the sea returns and floods the cave. There is something about this cave though, something magical and it is very easy to imagine Merlin, waiting there…waiting for Arthur.

Tennyson, like Monmouth before him, caught the imagination of the populace. This cave became woven into the Arthurian Legend and has been drawing people there ever since.

This cave was Merlin’s cave – hence the name.

The cave is accessible, although the climb down is steep and please, make sure you check the tide times before you embark on your adventure. Remember, even King Canute could not hold back the tide, so do not trust your magical powers to save you from the wildness of the sea!

English Heritage was recently accused of vandalism when they commissioned Merlin’s ‘face’ to be carved into the bedrock below Tintagel Castle.


"This official vandalism has been condemned by people who love Cornwall, both at home and as far away as Australia.” A spokesman from Kernow Matters To Us stated.

English Heritage stand accused of creating a tourist attraction around the whole King Arthur Legend, when there really is a terrible lack of proof that this place, this castle, had anything to do with the legend at all.  Are we to trust Monmouth’s version of history? Maybe - because let's face it- he could weave a really good yarn!

Like it or not, Arthur is, and probably always will be, a huge tourist attraction. I can understand English Heritage’s thinking, and it isn't like they are the first ones to use the legend in such a way - I believe those monks at Glastonbury Abbey had similar ideas once!

Now, I am not condemning or condoning them, I think that is up to each and every one of us to decide.

You can check out the full article from the Telegraph, where it goes in to the subject about Merlin's Cave and English Heritage's said 'vandalism', in a lot more detail. There are also some fantastic pictures of the said sculpture as well - just click on the link below...


The Telegraph and Merlin's Cave 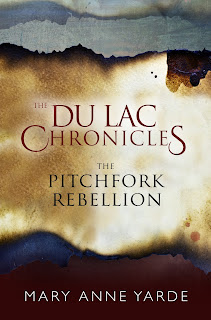 Merlin's Cave and The Pitchfork Rebellion

Regardless as to whether this cave is Merlin’s or not, it a certainly a beautiful place to visit and it definitely inspired me when I wrote The Pitchfork Rebellion. I talk of a cave in 'Pitchfork' – a cave with a sandy floor that is inaccessible at high-tide, for the sea floods the chamber and - more often than not, - with devastating consequences for those chained inside.

If you even find yourself at Tintagel Castle, be sure to check out Merlin's Cave as well.

Email ThisBlogThis!Share to TwitterShare to FacebookShare to Pinterest
Labels: Geoffrey Monmouth, Merlin's Cave, Myths and legends. Arthur and his knights of the Round Table. Arthurian legends, Tennyson, The Du Lac Chronicles, The Pitchfork Rebellion, Tintagel Castle