Friday Knights - Mordred - a good knight or a villainous traitor?

Okay, so most of us have heard of Mordred. He did, along with Lancelot, play a pinnacle part in the fall of Arthur at the Battle of Camlann.

Mordred was the son of Morgause - Arthur's sister -  but there is debate as to who his father was. Some say his father was Morgauses' husband, King Lot of Orkney, which would make Gawain his brother. While others say he was Arthur's illegitimate son, begot with his sister. Poor kid, no wonder he was so messed up 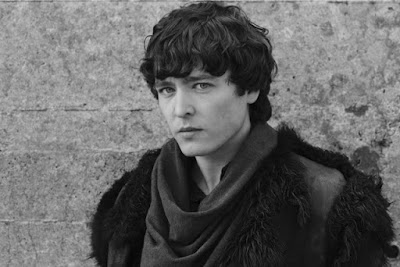 
But what else do we know of him?

Firstly, Mordred is mentioned really early on in the tales of Arthur and his knights.

("The strife of Camlann, in which Arthur and Medraut fell.")

This was what was written in Annales Cambriae for the year 537.

The Annales Camriae was written between the years 960 - 970. Although they cannot be counted as a primary source, they do however draw on older stories - probably verbal - of the telling of this great battle. If you have not already noticed, the quote above says nothing about Arthur fighting Mordred at Camlann. It states that both men fell (died) at Camlann - has Mordred therefore been wronged in the later telling of the tale?

So let's assume that Mordred was a knight, who fought bravely by Arthur's side and died next to him in battle. This begs the question..who is responsible for turning Mordred into a villain?

And we believed him. 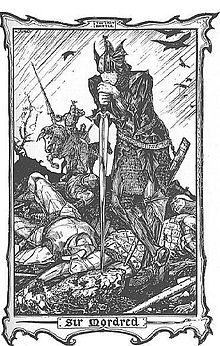 In the ancient Welsh texts Mordred is associated with Camlann. The two seem to go hand in hand. But Monmouth's casting of Mordred as the villain was soon accepted as the truth and others  expanded upon this story making Mordred something of an Anti-Christ - or an Anti-Arthur.

Time passes and the story changes. Lancelot enters the tale and some of Mordred's villainous activities are passed on to Lancelot - such as the affair with Guinevere. Malory goes as far as saying that Guinevere fled from Mordred's disgusting proposal and hid in the Tower of London, which I always found considerably clever of her, considering the Tower was not built until after the Norman invasion! But hey, anything is possible in Arthur's Britain.

In the Lancelot-Grail Cycle, Mordred was succeeded by his sons. The sons, like their father, have treachery running through their veins. In older text it is Constantine who tracks the brothers down and kills them. In later versions it is Lancelot and Bors.

But the extent of Mordred's treachery does not end there.

This quote is from Dante's Inferno. If you seek Mordred you would find him in the lowest circle of Hell - a place set aside for traitors.

Mordred is cast as a magically Druid boy in the BBC show Merlin (2008 - 2012). He becomes a Knight of Camelot and has no notion of treachery until his beloved is sentenced to death. Ironically, if Merlin had accepted Mordred as a source of good, then Arthur would never have died - but hey, what kind of story would that have made?

So there we have it. Of all the knights, I think Mordred is probably the least understood and the most wronged. Monmouth needed a villain and Mordred was it. I like to think that Mordred did not turn against Arthur, but fought by his side at Camlann - sacrificing his life, for his King. What do you think? Be sure to leave a comment below.
Posted by Mary Anne Yarde at 07:37

Email ThisBlogThis!Share to TwitterShare to FacebookShare to Pinterest
Labels: #amreading #arthurain #romance #fantasy Lancelot du Lac, Arthur Pendragon. King Arthur and his Knights of the Round Table, Mordred, the legend of King Arthur