I had the very great pleasure of reviewing the Winner of the Global Ebook Award for Best Historical Fiction  Song at Dawn: 1150 in Provence (The Troubadours Quartet) by Jean Gill. 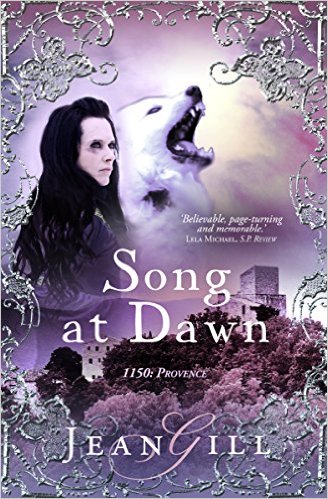 On the run from abuse, Estela wakes in a ditch with only her lute, her amazing voice, and a dagger hidden in her underskirt. Her talent finds a patron in Aliénor of Aquitaine and more than a music tutor in the Queen's finest troubadour and Commander of the Guard, Dragonetz los Pros.

Weary of war, Dragonetz uses Jewish money and Moorish expertise to build that most modern of inventions, a papermill, arousing the wrath of the Church. Their enemies gather, ready to light the political and religious powder-keg of medieval Narbonne.

Set in the period following the Second Crusade, Jean Gill's spellbinding romantic thrillers evoke medieval France with breathtaking accuracy. The characters leap off the page and include amazing women like Eleanor of Aquitaine and Ermengarda of Narbonne, who shaped history in battles and in bedchambers.

What did I think of the story?

Gill certainly knows how to weave a provocative tale of romance, plots, intrigue, treason and murder.

Songs at Dawn is set, for the most part, in the French city of Narbonne during the 12th Century. The story whisks us away to the court of Queen Aliénor (Eleanor) of Aquitaine. But the crown does not rest easy on Aliénor head. She is unhappy in her marriage and, to make things worse, there is an assassin in the bosom of her court - the question is...who?

The story is primarily about a 16-year-old runaway, called Estela, who, due to being a very talented musician, ends up at the court of Aliénor. Estela continues her tuition under the dashing, and not forgetting very talented troubadour, as well as an exemplary loyal knight - Dragonetz.

Estela finds herself plunged to the forefront of court life, and not always for the better. Jealousy is rife and Estela is an innocent. She is soon the target for malicious gossip and spiteful pranks.  She also has the added misfortune of falling for her tutor. I thought Gill's portrayal of Estela was exemplary. She captured her innocence perfectly and she was a very believable 16-year-old.

Dragonetz, is the Queen's most loyal servant and he would do everything in his power to keep her safe. However, he is growing tired of court life and war. He wants to become a mill owner – he has very ambitious plans to make paper - he is, I guess you could say, something of a visionary. But the Queen must come first – he certainly has no time, or no right, to allow the feelings he has for his young protégée to become anything more than a fancy. The romance between Estela and Dragonetz is a slow build, but when they both finally admit to having feelings for each other, passion takes over and life will never be the same for either of them again.

Gill has obviously spent a great deal of time researching the era her story is set in and this comes across in the telling.  I enjoyed the story very much and it has reawakened my interest in Eleanor of Aquitaine.

Where can I get my FREE copy of this fabulous book? 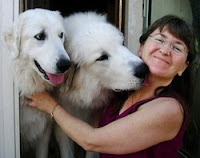 Jean Gill is a Welsh writer and photographer living in the south of France with a big white dog, a scruffy black dog, a Nikon D700 and a man. For many years, she taught English in Wales and was the first woman to be a secondary headteacher in Carmarthenshire. She is mother or stepmother to five children so life was hectic.

Publications are varied, including prize-winning poetry and novels, military history, translated books on dog training, and a cookery book on goat cheese. With Scottish parents, an English birthplace and French residence, she can usually support the winning team on most sporting occasions.

Contact Jean at jean.gill@wanadoo.fr with comments or questions. You'll find a mix of her work, along with fun trivia about books, at www.jeangill.com Her photo portfolio is at www.istockphoto.com/jeangill and she blogs at www.jeangill.blogspot.com