Excalibur - The Sword in the Stone

"In the midst of the lake Arthur was ware of an arm clothed in white samite, that held a fair sword in that hand."  Malory 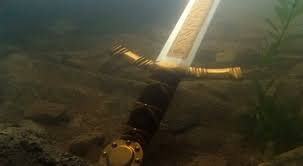 If I was asked to name a famous sword then Excalibur would be the first sword I would think of - but then considering my small obsession with Arthurian legend, I guess that is hardly a surprise!


In today's blog, I want to find out how and where Excalibur fits into the Arthurian story. Let us first look at the name. Excalibur...

Its origins can be traced way, way back to the Welsh works - although then it went by the name Caledfwlch. It can also be traced back to Irish mythology. Perhaps, Caledfwich was just a name given to swords in general - but for some reason, the name became associated with Arthurian legend and more importantly, it was the name given to Arthur's sword.

Monmouth is again, responsible for placing this sword in Arthur's hands. In The History of the King's of Britain, c.1136, Monmouth, Latinised the name of the sword and it became known as Caliburnus and he stated that it was forged in the Isles of Avalon...and his story kind of stuck.

Geoffrey Gaimer - an Anglo-Norman Chronicler who wrote the History Of The English People, carried on with this theme "...this Constantine was the nephew of Arthur, who had the sword Calibure..."

By the time Chrétien de Troyes got his hands on the story...


"...for at his belt (he is talking about Gawain) hung Excalibur, the finest sword that there was, which sliced through iron as through wood..."

The Sword in the Stone

"Whoso Pulleth Out This Sword of this Stone and Anvil, is Rightwise King Born of all England" Malory

Most of us would be familiar with the Malory quote above - it has been quoted countless times. Most notably in the Disney movie, The Sword in the Stone. But it was not Malory who came up with this whole 'pull a sword from a stone and become king,' idea, but Robert de Boron, in his great work Merlin. But once Boron suggested such a thing, the story took flight and very soon became...well, a legend.

Interestingly, it wasn't just Arthur who pulled a sword from a stone - Galahad did as well!

For me, the story of Arthur does not seem right without a mention of the sword in the stone, it goes hand-in-hand with the stories of Arthur as much as Camelot does.


Most recently, this theme was  portrayed in the BBC drama, Merlin. Similar to many of the stories...it is Merlin that places the sword in the stone.

Excalibur and the Lady of the Lake

The link between Excalibur and the Lady of the Lake was first suggested in the Post-Vulgate Cycle. In this story, Arthur does not pull the sword from a stone, but he is, instead, gifted the weapon from the Lady of the Lake, near the beginning of his reign. In Vulgate Mort Artu - Arthur orders the sword to be thrown back to the lake when he is fatally wounded. 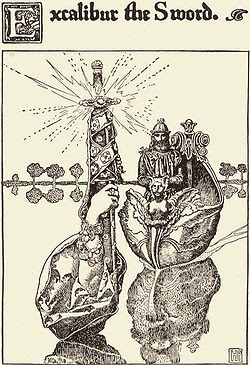 Malory - the master storyteller - tells of both version in Le Morte d"Arthur - he made sure he had all his basis covered!

Again, we have Malory to thank for this interpretation.

"thenne he drewe his swerd Excalibur, but it was so breyght in his enemyes eyen that it gaf light lyke thirty torchys." Malory

And let's not forget the magic scabbard and its magic powers. The one who wore the scabbard was protected in battle. Unfortunately Morgan Le Fay got her hands on it and threw it back in the lake, and that was the end of that. 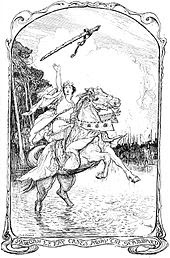 It is often said that on the blade of Excalibur there was an engraving which said...

Meaning simply to throw the sword back into the lake when the owner was finished with it and that is exactly what Arthur commanded Sir Bedivere to do. And on that note...I think we will leave it there for the day!

Email ThisBlogThis!Share to TwitterShare to FacebookShare to Pinterest
Labels: Arthur Pendragon. King Arthur and his Knights of the Round Table, Arthurian Legends, Excalibur, Myths and Legneds, The Lady of the Lake