"How do you know that the Keresa and the headdress really existed? 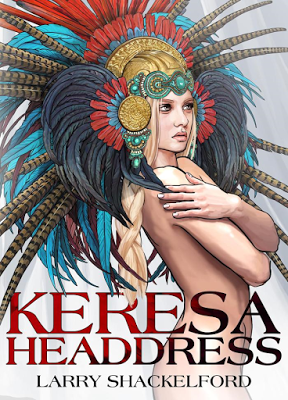 It’s just a routine case at the FBI’s Salt Lake City offices. The young woman’s boyfriend is missing, possibly dead. Agent Karen Adams thinks he’s probably just out with another woman—but then the Royal Canadian Mounted Police come calling. Why would they care about a wayward addict cheating on his girlfriend in Utah?

Soon, Karen is involved in a case like nothing she’s ever seen, navigating through an international criminal network of drugs, sex trafficking, murder, and the black market trade of priceless archaeological relics.

Her new partner Marcus “Playboy” McCoy—handsome, charming, and almost unbearably crass—is equal parts help and hindrance as she navigates a seamy underworld in the Utah desert.

But she also finds assistance from some unusual sources: a graduate student in archaeology, a dissatisfied sister-wife from a polygamous commune, and an undercover Canadian Mountie. Together they become entangled in the web of international crime and the only way out is to find the most priceless artifact of all: the legendary Keresa Headdress.


What did I think of the Story?

Oh my days - what a story. From the opening passage I was gripped. I was seriously addicted to this book.

Let me set the scene...imagine, if you will, Lethal Weapon mixed with Indiana Jones, 24, Spooks, Little House on the Prairie (yes, I did just say that!) and I don't know...something similar to the beautiful romance that was in Water for Elephants -- I kid you not -- This was all in one book!

There is no doubt in my mind that Shackelford is a master storyteller - it was like watching a movie - it was that easy to read. The pace of the story did not once slow down. This book draws you in and keeps you there, right up until the end.

Karen is such a superb character. I think we all know someone like Karen. She was alive in this book. She was so real, so believably wonderful – in my opinion, the perfect protagonist.

In contrast, if there was ever a partner so unsuitable for Karen it had to be Marcus. They played so well off each other, Karen was smart, respectable, while Marcus was an oversexed.... I found myself cringing, alongside Karen, at Marcus's many antics and please don't get me started on those grossly inappropriate Hawaiian shirts!

The story has so many twists, turns and unexpected events that this is a sitting-on-the-edge-of your-seat type of experience. It is a full on action adventure, with archaeology thrown in. Bonus!

The story does deal with some really difficult issues. There is a dark underworld in this book which preys on the vulnerable. I thought Shackelford was very sensitive in his approach when he wrote about this.

The antagonists were, as you would expect - awful, but very, very clever. They were not stupid villains; they had connections, insiders. They were ruthless in their pursuit of their goals. They were in it for the money, and nothing, not even the FBI was going to get in their way. Indeed, for most of the book the FBI were chasing their own tails - always one step behind.

The book, as the title suggests, revolves around the Black-Market in stolen archaeological artifacts. I found this absolutely fascinating. I thought this was a tricky subject to explain without it becoming a mini-lecture, but Shackledford depicted his knowledge so well that I didn't realise it was being explained - it was just part of the story. Now that takes some talent

The Keresa Headdress is a truly remarkable book. I loved it! I will definitely be reading more books from this author.

I would Highly Recommend that you check this out.

Larry was raised in southwest Missouri where he received his college degree, but he received his education after he graduated and began working in a maximum-security federal prison. After spending two years behind bars, he continued his law enforcement career as a criminal investigator, residing and working in eight states and two foreign countries. Larry retired from law enforcement after twenty-five years of service and resides in Salt Lake City with his wife and cat.
Posted by Mary Anne Yarde at 07:10