Can you hear the church bells ringing?


There once was a kingdom, a beautiful fertile kingdom, which was inhabited by a noble and handsome race. These were good people who loved their God so much that, it is said, they built a staggering 140 churches in which to worship him in. Some say they even built a glorious cathedral. But then one night, the unthinkable happened. The ocean rose and drowned the city, taking her deep into the murky depths, never to be seen again.


I am, of course, taking about Lyonesse and the once beautiful city of Lions.

There is a lovely legend...a man name Trevilian, foresaw the disaster. Seeing the approaching - I guess it was some sort of tsunami - he leapt onto a white horse and raced away from the advancing sea. He took refuge in a cave and watched as the sea calmed his city. The Trevilian coat of arms still bears a horse emerging from the water. It is also worth a mention that Brittany also tells of a lost city and the King, Gradlon, escaping the water on a horse. Maybe it is just a coincidence, maybe not. Nevertheless, the kingdom went by the name of Lyonesse. But how did Lyonesse become associated with Arthurian Legend? Let's take a look...!

The 1995 movie, First Knight, starring Richard Gere and Julie Ormond, portrays Guinevere as the ruler of Lyonesse. But the connection with Arthurian Legend, goes way back. 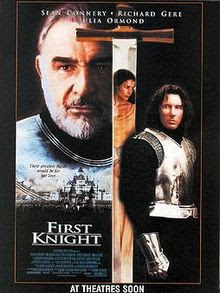 There are many stories of lost cities under the sea...some of the cities have even been found, such as Cleopatra's Palace in Egypt or the Olous in Crete. I guess the most famous of all these lost cities is Atlantis and I don't think anyone has found her yet. 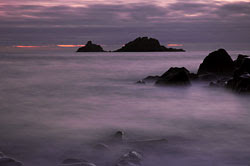 It is said that Lyonesse once stood between Land's End and the Isle of Scilly.  Now all that is left of that ancient kingdom is a reef known simply as the Seven Stones - a reminder perhaps, of the power of the sea. It is said, that on stormy nights one can still hear the haunting sound of church bells ringing and you can still make out the city walls under the water. At low tide, along the sands of Sampson Flats, the field boundaries of Lyonesse can be made out. Whether this lost kingdom really was called Lyonesse...I think could be debated, but that’s for another day.

Of course, as is often the case, Scotland also claims to have Lyonesse as does Brittany - and who’s to say they are wrong? But for this post I am going to assume that Lyonesse could be found just off the coast of Cornwall.

"Then rose the King and moved his host by night
And ever pushed Sir Mordred, league by league,
Back to the sunset bound of Lyonesse—
A land of old upheaven from the abyss
By fire, to sink into the abyss again;
Where fragments of forgotten peoples dwelt,
And the long mountains ended in a coast
Of ever-shifting sand, and far away
The phantom circle of a moaning sea."
Tennyson Idylls of the King


Interestingly, in the early texts of Arthurian Legend there is no mention of a kingdom disappearing under the sea, but then again, there was no mention of Camelot either -- but that's another story.

But as the legend grew, so did the story. When you look at Arthurian Legend as a whole, the land is a fundamental part of the stories. If it were not, then why was Camelot invented? And Lyonesse plays an important part in the legend.

It is said that Sir Tristan came from Lyonesse. At the time of the disaster, he was in Cornwall, at the court of his uncle - King Mark. He watched his father's kingdom be reclaimed by the sea - and there was nothing he could do about it.  Maybe things would have been different for Tristan, if Lyonesse had not been so cruelly taken from him. He certainly had his fair share of heartache - if the legend can be believed.

But, whatever the truth, a city was once there and unexpectedly the sea reclaimed it.
Posted by Mary Anne Yarde at 09:26