Ambrosius's army and the Saxon invaders fought a fierce battle at Salisbury Plain in Wiltshire. The day fell to Ambrosius, but his army had not come through the fierce battle unscathed. 3,000 of his loyal knights had been killed.

Ambrosius decided that the dead should be honoured. A memorial should be built in this place, to remember the fallen.

"If you are desirous," said Merlin, "to honour the burying-place of these men with an ever-lasting monument, send for the Giant's Dance, which is in Killaraus, a mountain in Ireland. For there is a structure of stones there, which none of this age could raise, without a profound knowledge of the mechanical arts. They are stones of a vast magnitude and wonderful quality; and if they can be placed here, as they are there, round this spot of ground, they will stand for ever."

Geoffrey Monmouth The History of the Kings of Britain 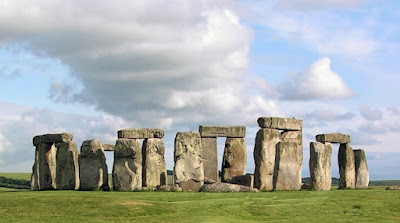 There was of course, a little problem with the Irish. They had no intention of giving up their sacred stones. Armed with 15,000 knights and accompanied by Ambrosius brother, Uther, Merlin traveled to Ireland. The Irish tried their very best to defend their stones, but they were overwhelmed not only by the numbers, but also by the skills of Ambrosius's knights.

Merlin now had possession of the stones...

"Now try your forces, young men, (said Merlin) and see whether strength or art can do the most towards taking down these stones."

Or not, as it happens.

Merlin watched the efforts of the knights with great amusement. Finally he stepped in and using his vast "contrivances" (skill) he moved the stones effortlessly and sent them to Briton. Once they reached Salisbury, Ambrosius summoned the clergy and the people to celebrate the erection of the monument. Once everyone had gathered, Merlin set the stones in the same position as they had been previously in Ireland.

Obviously, there is a great deal more to Stonehenge than this and the history of the site is fascinating. I am lucky that I live reasonably nearby to Stonehenge (just over a hours drive) and we have visited the ancient monument many times.

Unfortunately the stones, for their own protection, are roped off. You can walk around them, but you cannot touch them. 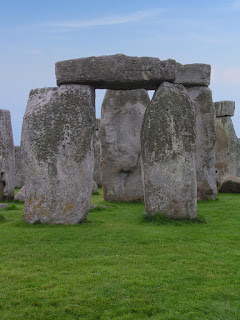 In 2013 English Heritage opened their new visitor center at the site. We went to visit the stones, and to see the new center, on a very cold and wet afternoon in January 2014. We have never walked around those stones so quickly in our life as we did that afternoon!  We were certainly glad to get back into the warmth of the visitors center, to which we discovered we were the only idiots who would venture out in such awful weather - we had the center practically to ourselves. Inside the center they have this marvelously roundish room. We sat down on the floor, in the middle of this room,  and watched the virtual tour of Stonehenge. The tour  takes you from the beginning of the monuments history, until modern day. It was very impressive and helped us appreciate just how old these stone are.

I am not surprised that Merlin found his way to Stonehenge. I find it hard to conceive just how our ancient ancestors moved these stones. Maybe, along the way, there was a little magic to it. I like to think so anyway.


Reference
Geoffrey of Monmouth The History of the Kings of Britain.

Email ThisBlogThis!Share to TwitterShare to FacebookShare to Pinterest
Labels: Ambrosius Aurelianus, Arthur and his Knights of the Round Table, Arthur Pendragon, Geoffrey Monmouth, King Arthur, Merlin, Myths and Legends, Stonehenge