I would like to welcome Poppy form The History Cupboard onto the blog today.
For some years now, as an avid fan of both history and art, I have been fascinated by a group of young Victorian artists who dared to break the rules of the known art establishment. During their time, they were seen as radical, only admired by those few who could recognise their creative genius and individuality. At times they shocked, at others they stunned, and, like any rebels, their lives were surrounded by scandal. But today they are recognised the world over as a group of forward thinking artists, who found themselves lost in the stiff boundaries of 19th century Britain.

When I was kindly given the chance to write a guest post here, I couldn’t resist the opportunity to link the subject of this blog, Arthurian legend, and my great love for the Pre-Raphaelites! Luckily, the Pre-Raphaelites were inspired by these ancient tales, and produced numerous artworks based upon them. But let’s start at the beginning, and discover who the Pre-Raphaelites actually are?

Their story began in September 1848. Five young bohemian artists, Dante Gabriel Rossetti, John Everett Millais, William Holman Hunt, James Collinson and Frederick George Stephens, along with sculptor Thomas Woolner and writer William Michael Rossetti, met in London, at the studio of Millais. Through their mutual ideas of creating meaningful art, they had found each other, and they desired to create and paint in a way that was unlike anything being produced by many Victorian artists emerging from the Royal Academy. Victorian art had become meaningless and artificial, and together, they wanted to take the world by storm and dare to do it differently. Truth to their subject was their main cause. Inspired by the writings of art critic John Ruskin and the works of Medieval artists, the group wished to bring life back into art. They discovered their unique style by looking back to artworks produced before the famous Renaissance artist Raphael (hence the name of the group!). They wished to reimagine the lost style of the Medieval masterpieces which they so admired, where artworks were displayed in a technicolour that jumped off of the canvas. To realise their aspirations, they formed the Pre-Raphaelite Brotherhood.

Here are just a few examples of the most recognisable Pre-Raphaelite artworks: 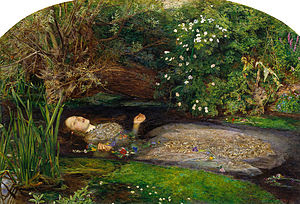 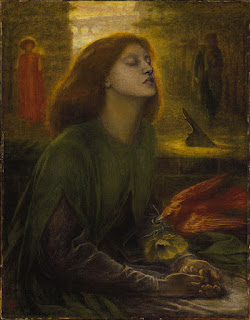 ‘The Golden Stairs’ by Edward Burne-Jones, 1880
Following their founding, the original Brotherhood soon welcomed other artists into their circle, and their influence continued into the 20th century. They produced hundreds of artworks, filled with the meaning that they had so wished to convey. Through tales of mythology, Shakespeare and poetry, the artists lead us through a magical world, and one of these world’s is that of Arthurian legend.


And no Arthurian tale quite captured the Pre-Raphaelites’ imagination than that of Elaine of Astolat. Although she was first mentioned by Sir Thomas Malory in his Morte d’Arthur in the 15th century, she was later to be immortalised in Alfred, Lord Tennyson’s famed poem, The Lady of Shalott. Very few similarities are held between the two accounts, all but the tragic love that poor Elaine holds for Sir Lancelot, a theme that the Pre-Raphaelites were obsessed with.


“Four gray walls, and four gray towers,
Overlook a space of flowers,
And the silent isle imbowers
The Lady of Shalott.”

The Lady of Shalott, doomed by a deadly curse, finds herself trapped inside the walls of a tower on the Isle of Shalott, where she has spent the entirety of her young life. Denied of the opportunity to discover the outside world, she is forced to content herself with viewing its reflection in a mirror. From these ‘shadows’, she weaves a beautiful tapestry of the happenings she has witnessed. Her days pass by uneventfully in her prison, until she sights Sir Lancelot, whose tuneful singing reaches her ears. Unable to resist temptation, the young lady turns away from her tapestry, and looks down to Camelot, from which direction Lancelot is approaching. Having lived for so many years without knowledge of how her curse will take hold, she finally unleashes it simply by taking a glance at the real world.

“Out flew the web and floated wide;
The mirror crack'd from side to side;
"The curse is come upon me," cried
The Lady of Shalott.”

Realising there is more to life than her solitary existence, the Lady of Shalott escapes her prison, an act which ultimately leads to her death. Boarding a boat, on which she carves her name, she floats down the river towards Camelot, where she hopes to view life in its true colours, not merely as ‘shadows of the world’. But she never quite makes it that far in life, dying on her voyage, the curse having doomed her to death.

“Lying, robed in snowy white
That loosely flew to left and right—
The leaves upon her falling light—
Thro' the noises of the night
She floated down to Camelot:
And as the boat-head wound along
The willowy hills and fields among,
They heard her singing her last song,
The Lady of Shalott.”

Easily the most famous depiction of the Lady of Shalott is that by John William Waterhouse. He was truly fascinated by the poem, depicted it several times in his paintings. But this is the most famous one: 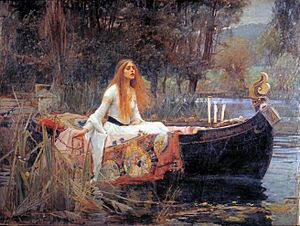 ‘The Lady of Shalott’ in the boat by John William Waterhouse, 1888

The Lady of Shalott is seen here embarking upon her journey down river, sitting upon the tapestry that has been her life's dedication. She’s finally breaking free from the chains that have held her trapped for so long.

The other Pre-Raphaelites that studied this tale also portrayed her as a lady trapped and wearied by her toilsome life. The sadness that the Lady of Shalott feels is a feature that all of these paintings share.

Sidney Harold Meteyard’s painting is perhaps the most sorrowful of all. You can see just how wearied she has become of seeing life through a reflection, rather than firsthand. The colours chosen by Meteyard add to the sorrow the Lady of Shalott is feeling. 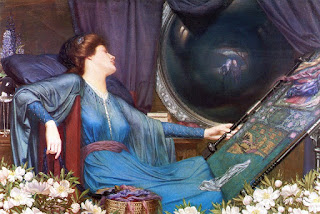 
Hunt’s interpretation, however, depicts the Lady of Shalott towards the end of her struggle, when she is beginning to build the courage to escape from her imprisonment. Entangled in the threads of her tapestry, the curse is trying with all its might to stop her from escaping. She is attempting in vain to untangle herself. The scattered irises lying at her feet symbolise her strength and courage to fight against her imminent doom. 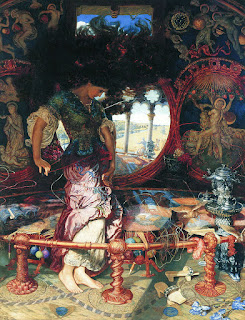 ‘The Lady of Shalott’ by William Holman Hunt, 1888


Perhaps the least known of the Lady of Shalott's incarnations is that drawn by Elizabeth Siddal, herself a woman who toiled with sadness all her life. Her interpretation is a simple drawing, but through it, we can clearly see the story panning out. Siddal decided to depict the moment when the Lady of Shalott turns towards the window, and feels the sun beat down upon her face for the first time. The way the tapestry is flying out is dramatic, greatly contrasting with the Lady’s seemingly calm and composed manner. Perhaps she is thinking of how much of her life has been wasted away imprisoned in her tower? 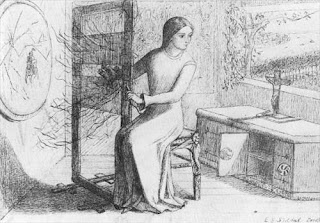 ‘The Lady of Shalott’ by Elizabeth Siddal


Although the Lady of Shalott's story is most common among the Arthurian tales depicted by the Pre-Raphaelites as a whole, individual artists chose many different and varied scenes to paint.

Dante Gabriel Rossetti’s are amongst my favourites - they’re just so colourful! Rossetti was a great fan of Sir Thomas Malory’s Morte d'Arthur, and in both of the following paintings, he chooses to focus on the quest for the Holy Grail. 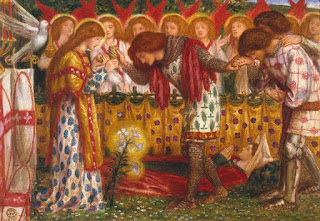 ‘How Sir Galahad, SirBors and Sir Percival Were Fed with the Sanct Grael; but Sir Percival’s SisterDied by the Way’ by Dante Gabriel Rossetti, 1864


This first example shows three knights of the Round Table, Sir Galahad, son of Sir Lancelot, Sir Percival, and Sir Bors, receiving the Holy Grail. Lying on the ground besides them is Sir Percival’s dead sister, who forfeited her pure young life to save a woman who could only be saved by the blood of a virgin. Rossetti has masterfully merged these two tales to form one story of faith and purity.


The three knights were the first to lay eyes on the Holy Grail, which was said to have been used by Jesus Christ at the Last Supper, and to have contained his blood following the Crucifixion. Many knights had attempted to discover the whereabouts of the Holy Grail, but it was only the pure Sir Galahad who could allow for such a venture to occur.


The second of Rossetti's artworks also depicts the Holy Grail, this time solely featuring the damsel who is briefly mentioned as handing over the Holy Grail to Sir Galahad, Sir Percival and Sir Bors, in Morte d'Arthur. Rossetti greatly romanticises and exaggerates the damsel’s role in Arthurian legend, but it’s such a beautiful image it just has to be included here! 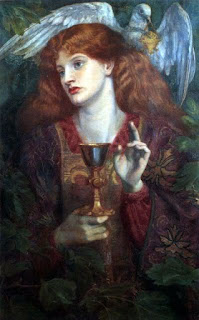 ‘The Damsel of Sanct Grael’ by Dante Gabriel  Rossett.
Burne-Jones imagined the scene of King Arthur’s passing on the Isle of Avalon. The ailing King is lying in the centre, surrounded by ladies shrouded in typically colourful, Burne-Jones attire. All are eagerly looking upon the King, hoping for him to recover from the wounds he sustained at the hands of Mordred's army, but it was not to be, for he died soon after.

So with this sad ending, portayed in the grandest of all Arthurian Pre-Raphaelite artworks, my post is now at its end. Thank you Mary Ann Yarde for allowing me to write here at your lovely blog, and I hope I may have enlightened you all about the artworks of the Pre-Raphaelites, and how they used their talents to give life to ancient Arthurian legend! 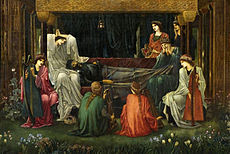 ‘The Last Sleep of Arthur at Avalon’ by Edward Burne-Jones

Refrence:
All images can be found in the public domain.

Email ThisBlogThis!Share to TwitterShare to FacebookShare to Pinterest
Labels: Arthur and his Knights of the Round Table, Arthurian legend, Pre-Raphaelites