The Lady of the Lake - who was she and what does she have to do with King Arthur?

"I cannot tell how the truth may be; I say the tale as 'twas said to me." Walter Scott

The hand rising out of the water, clutching King Arthur's mighty Excalibur -- That is the image I see when I think of the Lady of the Lake. 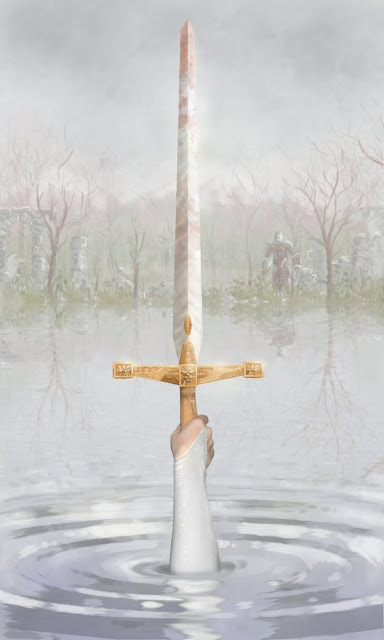 Of course there is a great deal more to the Lady of the Lake than merely a hand sticking out of a lake with a sword clutched in it! She plays a pivotal role in many of the stories of Arthur and his knights - most notably in the story of Lancelot.

In Arthurian Legend she is best remembered for:

*Raising Lancelot after his father's death.

*Nurses Lancelot back to health when he loses his mind.

Let us take a look at the stories and see how the character of The Lady of the Lake developed.

It is in the Lancelot-Grail Cycle where we first learn about The Lady of the Lake. Her name was Vivianne and she is the apprentice of Merlin. Merlin loves her dearly, despite knowing, for he has foreseen, that Viviane will be his undoing, his destruction, his doom! She wants to know all his secrets - she wishes to become as powerful as he is.

Merlin cannot resist her charms. Ignoring the risks, he tells her everything. In return she traps him in a tree - or was it a cave? - a stone? Anyway, he is entombed and apart from the odd wailing that is said to be heard from Merlin's Cave in Wales every so often, he is never heard of again. Such is life.

In the Post-Vulgate Cycle's, her name changed to Ninianne, and Excalibur makes an appearance.

Sir Robert Malory and The Lady of the Lake.

In Malory's epic tale there are two Ladies of the Lake. Nimue and Nyneve - the reason soon becomes apparent.

Nimue is not the typical Arthurian lady - think of all the women you meet in Arthurian Legend - some of the worst villains are, in fact, women - Morgan La Fay being the obvious one, but remember, even Guinevere brings down a kingdom with her notorious affair with Lancelot. No, Nimue is not like them, she is a force for good. She is married to Sir Pelleas, and is seemingly obedient to her husband, but secretly she sways the court of Camelot to do what is right and what is good. She is clever, but sympathetic. Strong, yet kind.

Although, saying that...in Le Morte d'Arthur, after she enchants Merlin, and subsequently entombs him, she then takes his place as Arthur's closest adviser. When Arthur is mortally wounded she travels with him back to Avalon and takes the sword back. 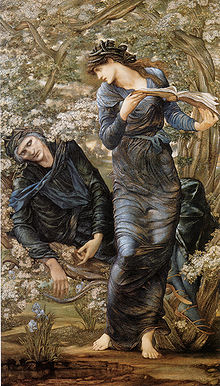 Nyneve is the other Lady of the Lake - she too marries Sir Pelleas and is a force for good. She is also linked with giving Arthur, Excalibur. It is interesting that in this story, Arthur receives Excalibur not once, but three times:

Firstly he pulls the sword from the stone.

Then he is given the sword from the Lady of the Lake.

And lastly, Nyneve presents Arthur with the sword in the midst of battle??!

When ever Arthur is in trouble the Lady of the Lake seemingly helps him. A fairy godmother if you like...minus the pumpkin! Instead she brings swords - far more useful.

Nyneve first appears in the tale of Arthur's wedding - noticeable the same time that The Round Table does, and the two have often been linked with this whole idea of chivalry and the Knights Code of Honour ever since.

The story of the Lady of the Lake has enchanted storytellers and their audience alike. Sir Walter Scott wrote the famous Lady of the Lake poem in 1810. Alfred Lord Tennyson also took an interest in this Arthurian character and immortalized her in Idylls of the King. Interestingly, like with Malory, he writes of two Ladies of the Lake. The first being Vivian - the deceitful woman who ensnares Merlin and her opposite, the Lady of the Lake who raised Lancelot and gives Arthur his sword. 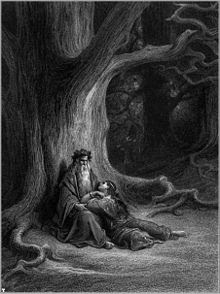 Gustave Dore's - Viviane and Merlin (1868).
The question remains, of course...where is the lake? We could start with Avalon and work our way around from there - that's if anyone can agree to where Avalon actually is!  There are so many supposed locations of where the lake could be, that I am not going to bother to list them in fear that I will miss a location out! But still, it's a good story isn't it.

Competition time!!!
How would you like to win a signed copy of The Du Lac Chronicles? All you have to do is post a comment telling me about your favourite Arthurian Character and why you like them so much! 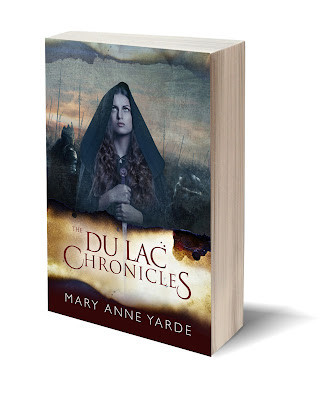 A generation after the fall of Arthur Pendragon...

“It is dangerous to become attached to a du Lac. He will break your heart, and you will not recover.”

So prophesies a wizened healer to Annis, daughter of King Cerdic of Wessex. If there is truth in the old crone’s words, they come far too late for Annis, who defies father, king, and country to save the man she loves.

Alden du Lac, once king of Cerniw, has nothing. Betrayed by Cerdic, Alden’s kingdom lies in rubble, his fort razed to the ground and his brother Merton missing, presumably dead. He has only one possession left worth saving: his heart. And to the horror of his few remaining allies, he gives that to the daughter of his enemy. They see Annis, at best, as a bargaining chip to avoid war with her powerful father. At worst, they see a Saxon witch with her claws in a broken, wounded king.

Or alternatively, pick up your copy from Amazon!

Email ThisBlogThis!Share to TwitterShare to FacebookShare to Pinterest
Labels: Arthur Pendragon, King Arthur and his knight of the Round Table, Myths and Legends., The Du Lac Chronicles, The Lady of the Lake