Hereward’s claim to fame came as a rebel leader when, armed with a multitude of dissidents, peasants and refugees, he made his stand at Ely against the might of William the Conqueror. The English Crown may have fallen at the Battle of Hastings in 1066 but five years later the impenetrable Isle of Ely in the East Anglian Fenlands was refusing to yield to the ‘Norman Yoke’.
Before the drainage of the Fens began in the 17th Century Ely was an island and the surrounding fenland gave it a natural defensive network of flowing rivers, great meres, swamp and bogs and vast swathes of reed beds and Willow trees. Not the kind of terrain that William’s armour-clad knights on horseback could comfortably traverse.

The Gesta Herwardi, written in the early 12th Century, describes Hereward as a handsome, muscular, troublesome youth, who was exiled from England at the age of 18 and was from that time on known as ‘The Outlaw’.


Recent studies have shed light on his career as a mercenary soldier in Flanders from where it is said he returned around the late summer of 1067 to claim his inheritance after learning of his father’s death. 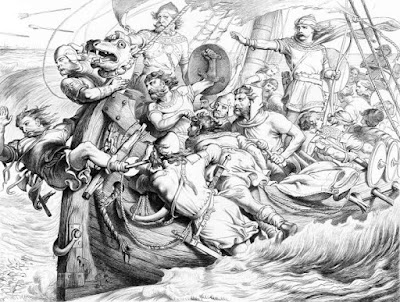 Over the ensuing three years insurrection broke out across the country - Dover, Exeter, Hereford, Warwick, Durham, York, and Chester and many others were, for the most part, savagely and mercilessly beaten-down and quashed - with thousands upon thousands slaughtered or left to perish in the devastation and ethnic-cleansing that came to be known as the ‘Harrying of the North’.


In 1070 the prelate Lanfranc of Bec came to England and William appointed him Archbishop of Canterbury. Lanfranc immediately set about revamping the English Church. Many Monasteries and Abbey’s experienced English clergy being replaced by French. William had imposed a new governing elite with new laws, a new language and a new Church. Very few English retained their title and land, most were in servitude.
Hereward, it appears, took exception to this. He was one of many dispossessed landholders and had close ties with Crowland and Peterborough Abbeys.
'And all the folk of the Fenlands came to them thinking they would win all the land.'  - Anglo-Saxon Chonicle


On June 2nd 1070, in response to the news that a Norman Abbot named Turold was about to take over, Hereward ‘and his band’ ransacked Peterborough with a Danish ‘Viking’ host led by Earl Osborne and Bishop Christian of Aarhus. They stole gold and silver of great value from a monastery known as the ‘Golden Borough’ because it rivalled Glastonbury and Ely in wealth. They then made their way to the Isle of Ely apparently on the invitation of Abbot Thurstan who feared the same fate for Ely.
‘they did all manner of evil things’  - The Peterborough Chronicle of Hugh Candidus.
All the participating rebels were subsequently excommunicated by the Church. To the fanatically pious English Churchmen of the time – where everything that happened, happened by God’s will – Hereward’s raid on Peterborough Abbey was likely viewed as the work of the devil-incarnate.
The Danes however soon left with much of the loot, some say bought off by William. Hereward was then joined by a number of prominent English nobles. The Earls of the great northern provinces of Mercia and Northumberland, Edwin and Morcar - who had escaped house arrest under William and ‘fled through woods and fields’- reinforced by the northern land magnate Siward Barn, with the powerful Bishop Athelwine of Durham and ‘many hundreds of men with them’ who fared into Ely by ship.
Overall a protracted guerrilla war was fought lasting about a year or so. Hereward is reported to have disguised himself as a fisherman and as a potter in order to spy on William and his army and led countless assaults and forays into the Norman camps that surrounded the Isle. He and his men frequently raided deep into Norfolk no doubt employing shock and awe tactics on Norman and collaborator alike. Burwell was scorched in the process and battles are said to have ensued at Reach, Stuntney and Aldreth. It is supposed that the highly esteemed Norman Sheriff William Malet lost his life fighting against Hereward at Ely. This was a fearsome force of men at large in defiance of the ‘oppressions and humiliations suffered by the English’, as later described by Orderic Vitalis.
Whether in desperation or belief, William even employed the services of a witch to cast a spell upon the defendants of Ely, but Hereward and his men burned down the raised platform she stood upon and she fell and broke her neck. William then built a long causeway to try and gain access to the Isle but Hereward and his men fired the combustible peat fen destroying the wooden causeway and routing the heavily armoured Norman knights.  Reports of Norman skeletons in their chain-mail being dug out of the surrounding fen were recorded over a hundred years later.
‘he bravely led them out’ - Anglo-Saxon Chronicle.
Ely eventually capitulated sometime in the summer of 1071. The Gesta Herwardi states that Abbot Thurstan, who had lost much of Ely’s land to William as punishment, sought to come to terms. William’s army were led through a secret pathway by some monks and the game was up. Hereward and many of his followers are reported to have fled - and it is at this point that history becomes blurred and legend comes more sharply into focus.
‘Last of the English!’ 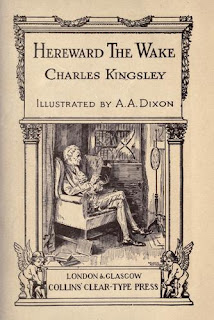 800 years after the Battle of Hastings in 1866 the novelist Charles Kingsley published the romantic epic, ‘Hereward the Wake’ – subtitled ‘Last of the English!’ The book about a patriotic hero was unleashed on a Victorian public weaned on the historical novels of Sir Walter Scott and it immediately became staple diet for children of all ages. The popularity of this book, which has never been out of print, is the major reason why we remember Hereward today.
The Victorians, ever proud of their heritage and looking for their ‘island story’ held Hereward up as a prototype Englishman full of all those contemporary British virtues of patriotism, gallantry, selflessness and bravery - while the spirit of his famous last stand at Ely was seemingly mirrored in feats of Empire in such far-away places as Rorke’s Drift and Mafeking.

Arguments ensue about Hereward’s parentage, descent and his social standing. He has been represented as a champion and a patriot and in children’s books has even met the likes of Dr Who and Catweazle! Recent years have seen a ‘new wave’ of Herewardista’s rise up in the literary world. The works of Paul Kingsnorth, James Wilde, Stewart Binns, James Aitcheson and others has rekindled an interest in Hereward just as it began to fade from the lore of the local folk across the Fenlands - whilst historical research from Professor Elizabeth van Houts from Cambridge University and others has uncovered much evidence to substantiate the writings of 12th Century monks, which were once considered unreliable.

If you are new to Hereward there are a whole host of novels to explore. The benchmark will forever be Charles Kingsley’s Hereward the Wake - but in recent years a new wave of ‘Herewardista’s’ have emerged, proving to be the vanguard of the attack to re-launch Hereward into popular culture!
Author Stewart Binns draws parallels between Hereward and William Wallace when talking about his book Conquest in an interview on Youtube.

The storyline is told by a certain Godwin of Ely on his deathbed in the heart of the capital of the Byzantine Empire, Constantinople. Godwin relates to his listeners how Hereward fights at the Battle of Hastings and gets crushed by a horse at the very moment King Harold comes under attack, leaving Hereward’s followers with a dilemma of who to help first. Hereward’s plight fostering Harold’s death foreshadows the calamity of the English resistance that was to follow. The vivid images regaled by Stewart throughout bear testimony to his work as a television documentary producer.

James Aitcheson’s Knights of the Hawk is told from the point of view of Tancred, a Norman Knight, who becomes instrumental in the victory over the English at Ely in the Autumn of 1071. Where Binns has Hereward travelling far and wide Aitcheson’s Hereward becomes a target in the marsh. ‘Destroy him and many of the others will lose belief’, exclaims Tancred to his fellow knights as the hunt for Hereward’s head begins. Aitcheson’s angle as the English as ‘the other’ makes for a refreshing read and his knowledge on Anglo-Norman England is clearly evident.

If there is one person who should take the larger slice of the credit for significantly bringing Hereward out of shadowy obscurity and into the glimmering light of the public eye during the course of this decade it has to be the charismatic ‘man of Mercia’, James Wilde. In true Hereward style as a man of many guises James Wilde is the pen name of author, BBC screenwriter and journalist Mark Chadbourne. Perhaps the key to James’ success with Hereward has been in the planning of a whole series, as well as a number of off-shoots. This has given the Hereward story the time and space to evolve and develop more fully in the reader’s imagination. Accompanied by the most defining image of Hereward since Henry Courtney Selous illustrated Kingsley’s epic in 1870, Wilde releases his sixth instalment of the saga The Bloody Crown in July.

As works of art go, Paul Kingsnorth’s The Wake takes some beating, as proven by being the winner of the Gordon Burn Prize in 2014 and The Bookseller Industry ‘Book of the Year’ award. It has been heralded far and wide as ‘a literary triumph’ for Kingsnorth writes his offering in what he calls ‘a shadow tongue’, a language ‘intended to convey the feeling’ of Old English through borrowed vocabulary and syntax. As a paradox to the merits of the novel ‘fuccan’ ‘scit’ were my two favourite words invented by Kingsnorth,  although his use of the disputed appellation ‘the Wake’ met with my admiration the most. Based in the Fens you can feel the damp rising through your bones as you read this masterpiece.


I am in the process of setting up a community project, the ‘WakeHereward’ Project, in order to raise the profile of the ‘forgotten hero’ of the Fenlands. Please visit my Twitter page for further information @WakeHereward


Reference
The images of Hereward are by Henry Courtney Selous (1870).