Read an #Excerpt from M. C. Bunn's fabulous novel - Where Your Treasure Is @MCBunn3 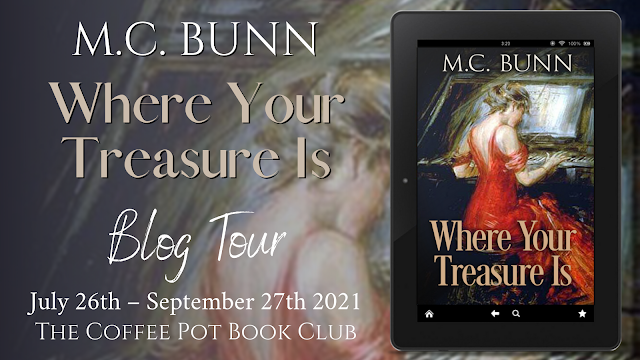 Where Your Treasure Is
By M. C. Bunn 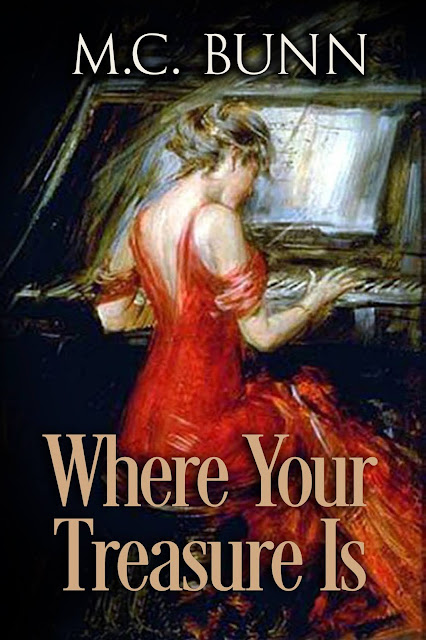 Feisty, independent heiress Winifred de la Coeur has never wanted to live according to someone else’s rules—but even she didn’t plan on falling in love with a bank robber.

Winifred is a wealthy, nontraditional beauty who bridles against the strict rules and conventions of Victorian London society. When she gets caught up in the chaos of a bungled bank robbery, she is thrust unwillingly into an encounter with Court Furor, a reluctant getaway driver and prizefighter. In the bitter cold of a bleak London winter, sparks fly.

Winifred and Court are two misfits in their own circumscribed worlds—the fashionable beau monde with its rigorously upheld rules, and the gritty demimonde, where survival often means life-or-death choices.

Despite their conflicting backgrounds, they fall desperately in love while acknowledging the impossibility of remaining together. Returning to their own worlds, they try to make peace with their lives until a moment of unrestrained honesty and defiance threatens to topple the deceptions that they have carefully constructed to protect each other.

A story of the overlapping entanglements of Victorian London’s social classes, the strength of family bonds and true friendship, and the power of love to heal a broken spirit.

Approaching the right turn that would take him to Swift Street and the Royal Empire Bank, Court Furor concentrated on traffic. Cold bit his cheeks and hunger gnawed his belly, but he ignored both through force of habit. The soles of his boots were thin and his gloves pointless. He hunched more deeply into his coat and wished he hadn’t tossed his last coppers to that flower girl. But when she had thrust her wilted violets at him and smiled—those black teeth of hers—Jesus, Mary, and Joseph! Of course, she could’ve stained them for effect. At her age, he’d already had quite a few similar tricks up his sleeve to elicit the pity of potential targets. Early on, he’d known how to get by. Only because of that girl’s need—or her guile—he was now officially without a penny to his name. What did that say for the wisdom of experience?

No point worrying about what the day would bring, never mind the next one. At Beryl and Rosie’s flat he’d read in a pamphlet the doctor had left that the life expectancy of men from the East End was only—it wasn’t worth repeating. At twenty-four, he was living on borrowed time. No one had to tell him that.

People down his way didn’t celebrate birthdays, mostly because there was nothing to celebrate, but he was doing all right for a boy born in the Old Nichol. That is, he’d opened his eyes another day. If he opened them tomorrow, he’d be twenty-five. He even had a job, sort of. Dear old Mum would’ve felt, not proud, exactly. She couldn’t feel much these days. Wound in a dirty sheet and dropped into a pauper’s grave. How old had she been? He’d no idea. But she’d known his birth date to the hour and the minute. Baptized and registered, he was!

Look up lad, she used to say. “You have to look up to get up.” So far, the highest he’d managed was a carriage box. Screwed to the lowest rung in the social ladder, Court kept his eyes on the traffic and minded his horse. If he raised his sights too high, he might run over one of those boys who kept darting out into the street, begging coppers he didn’t have any more of.

He was the last son of Mick and Sadie Furor. His four older brothers had given up in quick succession during their infancies. According to Beryl’s pamphlet, his miraculous survival beyond the cradle was another statistical anomaly, though no one had taken note but his dear old Mum. By the time he was delivered, Sadie was completely worn out. She’d lost her good looks and her patience with her heavy-handed, fast-talking, skirt-chasing mate. Mick Furor saw his new son as another gaping mouth to feed and acted accordingly. He eschewed all responsibility for Court’s upbringing except to provide him with a bad example and an early education in how to pick a pocket or take a blow. Meanwhile, Mick continued to populate the neighborhood with his dark-haired progeny, supplying Sadie with interminable heartache and Court with a half-sister, Beryl, among others. For all he knew, the rest of Mick’s children had suffered the fates listed in the pamphlet and died young of various fevers, neglect, or starvation.

Then again, one never knew. One of the louts in the hackney, Geoff Ratchet, was from the old neighborhood and the same approximate age as Court. People said there was a resemblance. Court didn’t see it. The Methodist pastor who headed the school they’d briefly attended preached that all men were brothers. If that included Geoff, Court hoped the pastor was wrong.

On the eve of his quarter century, Court felt it incumbent upon him to reflect. Since it would be ages before he’d be able to get some sleep, he might as well. His survival was both a mystery and a wonder. He was a man of no prospects and no property but preferred to think of it as freedom from responsibility. Both of his parents had survived much longer than Beryl’s pamphlet indicated was normal for folks of their ilk. Court supposed he might too but wouldn’t bet on it. Mick was stabbed in a brawl while Court was yet a boy. Sadie had recently succumbed to gin poisoning after a series of abusive liaisons. Her last paramours came from the list of Mick’s compatriots: cardsharps, pickpockets, and opium addicts. Court’s company was not much better. But he was inclined to gambling, horseflesh, and women.

He directed the horse to a slow walk, trying to secure a place in the queue for the curb. In the gleaming brougham beside him sat a woman, her face hidden under an enormous, bright green hat trimmed with black ostrich feathers. Her driver signaled, and Court tugged his reins. Her carriage cut in front of him, taking a spot held open by a waiting footman in the bank’s livery. Court philosophically picked the grime from his fingernails while another footman helped the woman descend and took her small case. Though a thick veil covered her face, Court caught a glimpse of golden hair, coiled in heavy masses on her shoulders. The wind lifted the edge of her mantle, and he was briefly amazed by the brilliant green of her dress.

The chestnut seller and his cart caught up to the line of vehicles. The aroma was delicious. What he wouldn’t give to go to that chop house advertised on the other man’s boards. Court’s stomach ached. He felt a twinge of resentment toward the woman. She’d obviously never missed a meal in her life. 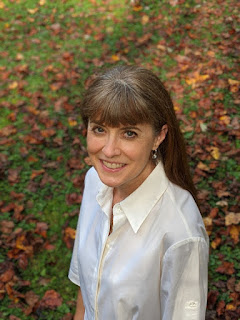 M. C. Bunn grew up in a house full of books, history, and music. “Daddy was a master storyteller. The past was another world, but one that seemed familiar because of him. He read aloud at the table, classics or whatever historical subject interested him. His idea of bedtime stories were passages from Dickens, Twain, and Stevenson. Mama told me I could write whatever I wanted. She put a dictionary in my hands and let me use her typewriter, or watch I, Claudius and Shoulder to Shoulder when they first aired on Masterpiece Theatre. She was the realist. He was the romantic. They were a great team.”

Where Your Treasure Is, a novel set in late-Victorian London and Norfolk, came together after the sudden death of the author’s father. “I’d been teaching high school English for over a decade and had spent the summer cleaning my parents’ house and their offices. It was August, time for classes to begin. The characters emerged out of nowhere, sort of like they knew I needed them. They took over.”

She had worked on a novella as part of her master’s degree in English years before but set it aside, along with many other stories. “I was also writing songs for the band I’m in and had done a libretto for a sacred piece. All of that was completely different from Where Your Treasure Is. Before her health declined, my mother heard Treasure’s first draft and encouraged me to return to prose. The novel is a nod to all the wonderful books my father read to us, the old movies we stayed up to watch, a thank you to my parents, especially Mama for reminding me that nothing is wasted. Dreams don’t have to die. Neither does love.”

When M. C. Bunn is not writing, she’s researching or reading. Her idea of a well-appointed room includes multiple bookshelves, a full pot of coffee, and a place to lie down with a big, old book. To further feed her soul, she and her husband take long walks with their dog, Emeril in North Carolina’s woods, or she makes music with friends.

“I try to remember to look up at the sky and take some time each day to be thankful.” 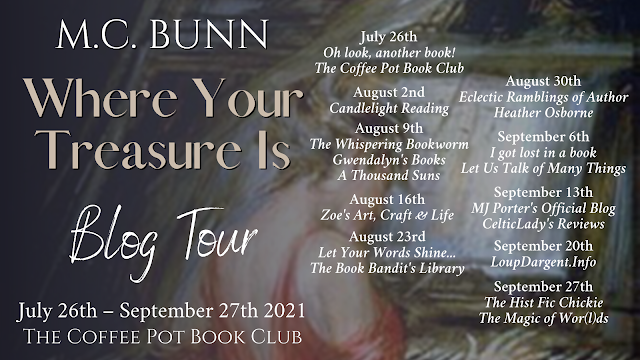