Read an excerpt from Siobhan Daiko's fabulous book, The Girl from Venice @siobhandaiko 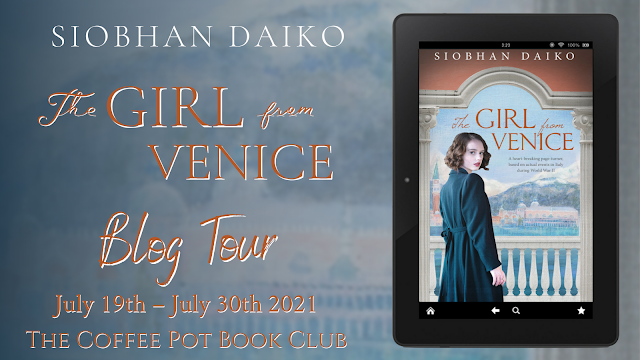 The Girl from Venice
By Siobhan Daiko 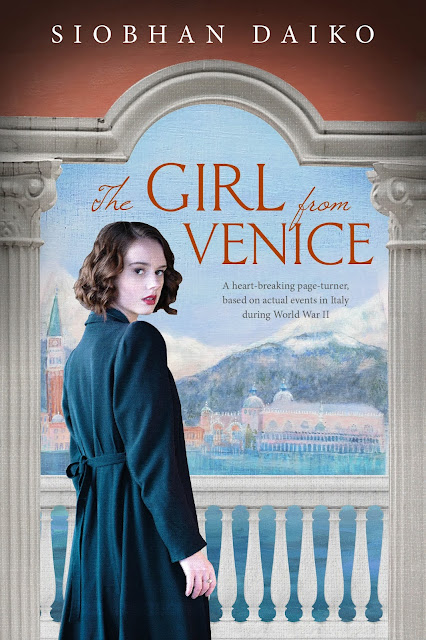 Publication Date: 1st July 2021
Publisher: ASOLANDO BOOKS
Page Length: 300 Pages
Genre: Romantic Historical/Women’s Fiction
Lidia De Angelis has kept a low profile since Mussolini's racial laws wrenched her from her childhood sweetheart. But when the Germans occupy Venice in 1943, she must flee the city to save her life.
Lidia joins the partisans in the Venetian mountains, where she meets David, an English soldier fighting for the same cause. As she grows closer to him, harsh Nazi reprisals and Lidia’s own ardent anti-fascist activities threaten to tear them apart.
Decades later in London, while sorting through her grandmother’s belongings after her death, Charlotte discovers a Jewish prayer book, unopened letters written in Italian, and a fading photograph of a group of young people in front of the Doge’s Palace.
Intrigued by her grandmother’s refusal to talk about her life in Italy before and during the war, Charlotte travels to Venice in search of her roots. There, she learns not only the devastating truth about her grandmother’s past, but also some surprising truths about herself.
A heart-breaking page-turner, based on actual events in Italy during World War II
Trigger Warnings: Death, Miscarriage, PTSD, Rape

Lidia drew back her bedroom curtains and opened the shutters. The humid morning air caressed her face, and she tucked a wayward curl of dark brown hair behind her ear. She smoothed her hands over the cool marble windowsill and gazed out across the lagoon. The pearly pink façade of the Doge’s Palace shimmered in the early autumn sunshine, its colonnades and balconies bearing witness to the immense power which once resided there.

Her skin prickled and she stepped away from the window. On the fondamenta, the street lining the canal below, two of Mussolini’s blackshirts—an armed squad whose job was to bring into line anyone who opposed him—were marching purposefully towards the vaporetto water bus station. It was unusual to see them out on the street like this, and the sight of them set her heart hammering. As far as she knew, the squadristi usually kept a low profile, having been warned not to scare the tourists. Tourism was vital to the economy, apparently, and Mussolini had ordered the blackshirts to desist from such practices as openly tying a “troublemaker” to a tree and forcing a litre of castor oil down their throat. Lidia shuddered. Venice boasted few trees, but the blackshirts would find pillars where they secretly carried out this despicable act. She was an ardent anti-Fascist like her sweetheart, Renzo, and her group of university friends; they made it their business to keep tabs on the blackshirts. From a distance. She wouldn’t like to get too close to one.

The enticing aroma of coffee brewing filled her nostrils. She made her way down the narrow corridor to the kitchen, a square room at the rear of the palatial apartment. Her papa glanced up from the book he was reading. ‘Ready for your first day back?’ he asked, adjusting his spectacles on his thin nose.

She helped herself from the moka pot on the stove, then dragged a chair out from under the table. ‘I’ve been looking forward to it for weeks.’ And to seeing more of Renzo.

She added two teaspoonfuls of sugar to her coffee. The sweet, dark liquid slipped down her throat, and she gave Papa a smile. ‘Do you have a lot of patients to visit?’ In the mornings, he would make his rounds.

‘Too many, cara mia. ’I can’t wait for you to be qualified so you can join me in the practice.’

She picked up a piece of bread and spread jam on it. ‘Five more years to go. Seems like a lifetime…’

‘For you, it does, because you are young. Five years, for me, will pass in a flash.’

After she and Papa had finished their breakfast, she took their dishes to the sink. Rinsing them with hot water, she let her mind wander. How she would have loved her mamma to be here and to see her starting her second year of medicine. Mamma had been an English professor at the university until she lost her battle with cancer six years ago. It was thanks to her that Lidia had learnt to speak fluent English, and it was also thanks to her that she had learnt to value her Jewish heritage. Mamma had enriched their home life with Jewish traditions such as lighting candles on Friday nights, cooking Jewish food and celebrating Jewish holidays. But Lidia and her parents only went to the synagogue for weddings or funerals; they were secular Jews, Italians who celebrated Passover instead of Easter. She swallowed the lump of sadness that had swelled in her throat. She still missed Mamma so much.

She fetched her coat from the cupboard in the hallway and slipped it on. Papa was already opening the front door. They passed their neighbour, Signora Rossi, at the foot of the stairs leading up to the apartments. ‘Buongiorno,’ the plump middle-aged woman greeted them, a bag of freshly baked loaves under her arm.

They wished her a good morning in return, then stepped out of their palazzo onto the fondamenta. ‘I’ll see you this evening, cara mia,’ Papa said, swinging his physician’s bag. ‘Enjoy the start of the new term.’

‘I will.’ She kissed Papa’s smooth cheek, inhaling the familiar spicy scent of his aftershave. He was her rock and she loved him unconditionally.

At the Zitelle vaporetto station, they went their separate ways—Lidia taking the waterbus to Zattere, from where she would walk to the university, and Papa heading in the direction of the San Marco district to visit the first of this morning’s patients.

Lidia found a seat at the prow, hugging her satchel as the engines went into reverse and the boat pulled away from the pier into the Giudecca Canal. Would Marta get on at the next stop? Marta was her best friend. They’d met at secondary school and had in common their dislike of the cult of Mussolini. Once, they’d been forced to read his biography in class and had sniggered behind their hands when they read about the Duce playing with a lion in its cage at the zoo. Marta’s father had told them beforehand that the lion had been toothless.

Soon, the waterbus was tying up at the Redentore stop. Lidia waved as she spotted Marta’s fair hair in the crowd of morning commuters. ‘Ciao,’ she called out.

Marta jostled to the front of the boat and sat herself down. ‘Are you going to be dissecting any more dead bodies this year?’ she asked with a grimace.

‘No, we leave that to the freshmen,’ Lidia grinned. ‘I’m looking forward to learning about all the different diseases instead.’

Marta made a gagging sound. ‘Rather you than me.’ She was studying to be an architect and was far more interested in art than science. ‘At least we’re both doing something with our brains.’ She lowered her voice to a whisper. ‘If Mussolini had his way, we’d be wives and mothers by now.’

Lidia glanced at the people sitting close by. It wouldn’t be a good idea to give voice to her thoughts in public. She pressed a finger to her lips and winked at her friend.

Fifteen minutes later, she and Marta were strolling arm in arm towards Ca’ Foscari. She knew these narrow calli—what Venetians like her called their pedestrianised streets. She knew the bridges spanning the small canals along the way. She knew the squares, or campi. She knew the dark alleyways, so narrow she could reach out and touch both walls with her outstretched hands. This was her city; she knew it like she knew herself.

Not many universities in the world were housed in a Gothic palace overlooking a waterway as beautiful as Venice’s Grand Canal, she marvelled as she and Marta stepped into the courtyard. Her breath caught. There was Renzo, tall and handsome as ever. But what was he doing standing on the steps? He’d mentioned only yesterday that he had an early class in the law faculty and would meet her for lunch in the mensa, the canteen where they always ate during term time.

She unhooked her arm from Marta’s. ‘I’ll go and say ciao to Renzo.’

‘Run to your moroso,’ Marta laughed. ‘I’ll wait for you here…'

But Renzo had seen her and was racing down the steps. They met each other in the centre of the courtyard. Her heart skipped a beat as she took in his serious expression. ‘What’s wrong?’

He glanced from one end of the patio to the other before his eyes met hers.

‘All Jews have been expelled from the university,’ he said without preamble.

She gasped. ‘What do you mean, “expelled from the university”?’

‘I went to register, and they shoved a piece of paper at me. There’s been a Royal Decree excluding Jews from public office and higher education.’ Renzo’s deep baritone voice seemed to have gone up an octave.

Lidia shook her head. ‘There must be a misunderstanding. They can’t do this to us.’

‘We’re Jews and that’s a good enough reason for them.’

She pressed her lips together. ‘Well, I still think there has been a mistake. This is Italy, not Germany…’

‘I hope not.’ She glanced around for Marta, who must have been wondering why she was lingering.

Marta had already started walking towards them. She came up and touched her hand to Lidia’s. ‘We’d better go and register,’ she said.

Lidia explained, and Marta’s cheeks reddened. ‘I’m so sorry. This makes me ashamed to be Italian.’

‘Renzo and I are Italians too,’ Lidia said. ‘There must be something we can do…’

‘Be careful, cara.’ Renzo put his arm around her shoulder. ‘People are staring at us.’

‘Renzo is right. Don’t call attention to yourselves,’ Marta advised. ‘There are blackshirts posing as students, you know.’

Lidia nodded. She set her jaw, determined not to let the tears of anger and frustration spill from her eyes.

‘We’d better go home.’ Renzo’s hold on her shoulder tightened. ‘Let me walk with you to the vaporetto station.’

‘I’ll catch up with you later, Lidia,’ Marta’s eyes searched her face. ‘After you’ve told your papa.’

‘This will be the final straw for my parents,’ Renzo muttered. ‘They’ve been considering leaving Italy for a while now.’ He squeezed Lidia’s arm. ‘I hope you and your father will come with us…’

Her chest tightened. Leave Venice? Would Papa consider it? And, more to the point, would she? She loved this city and always felt bereft when she left it. 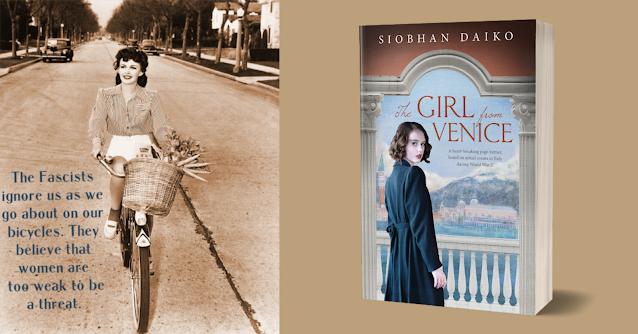 Read this novel for FREE with #KindleUnlimited subscription. 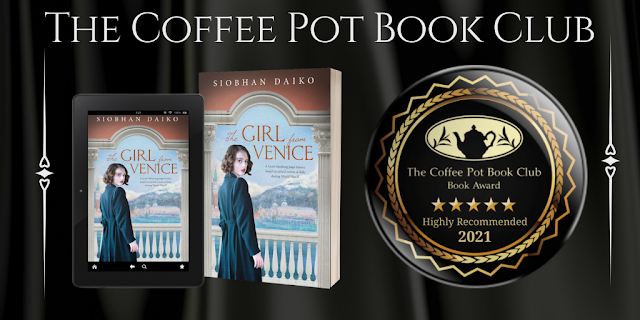 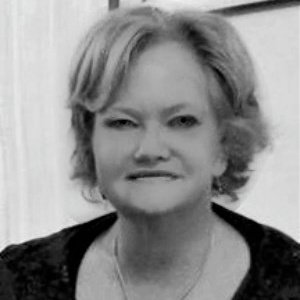 Siobhan Daiko is an international bestselling historical romantic fiction author. A lover of all things Italian, she lives in the Veneto region of northern Italy with her husband, a Havanese puppy and two rescue cats. After a life of romance and adventure in Hong Kong, Australia and the UK, Siobhan now spends her time, when she isn't writing, enjoying the sweet life near Venice. 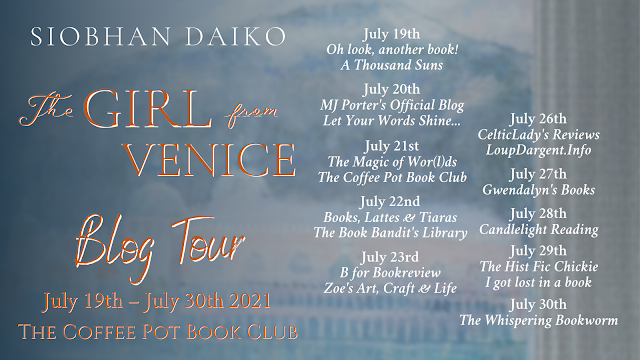