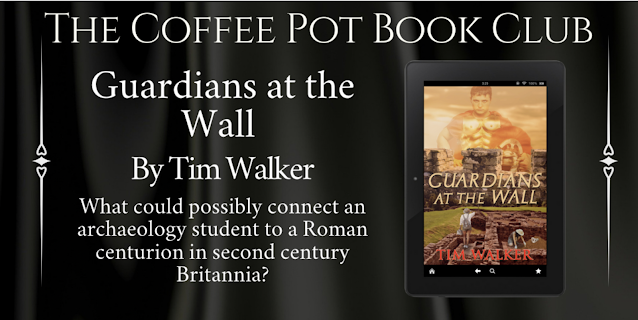 Guardians at the Wall
By Tim Walker 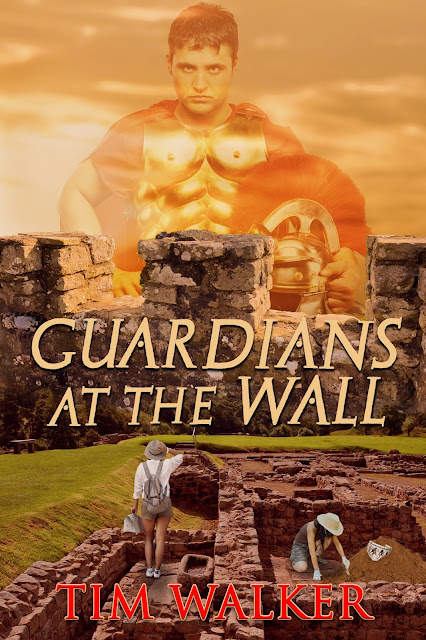 Publication Date: 1st June 2021
Publisher: Independently published
Page Length: 310 Pages
Genre: Historical dual timeline (Contemporary/Roman)
Archaeology student Noah scrapes the soil near Hadrian’s Wall, once a barrier that divided Roman Britannia from wild Caledonian tribes, in the hope of uncovering an ancient artefact around which he can build a project-defining story.
He makes an intriguing find, but hasn't anticipated the distraction of becoming the object of desire in a developing love triangle in the isolated academic community at Vindolanda. He’s living his best life, but must learn to prioritise in a race against time to solve an astounding 2,000-year-old riddle, and an artefact theft, as he comes to realise his future career prospects depend on it.
In the same place, almost 2,000 years earlier, Centurion Gaius Atticianus, hungover and unaware of the bloody conflicts that will soon challenge him, is rattled by the hoot of an owl, a bad omen.
These are the protagonists whose lives will brush together in the alternating strands of this dual timeline historical novel, one commencing his journey and trying to get noticed, the other trying to stay intact as he approaches retirement.
How will the breathless battles fought by a Roman officer influence the fortunes of a twenty-first century archaeology mud rat? Can naive Noah, distracted by the attentions of two very different women, navigate his way to a winning presentation?
Find out in Tim Walker's thrilling historical dual timeline novel, Guardians at the Wall.

Vindolanda, near Hadrian’s Wall, 180 CE
Gaius Atticianus grunted and chewed a ball of phlegm before spitting over the stone battlements into the encroaching darkness. A pale crescent moon escorted by stars was rising over a line of hills that separated Vindolanda fort from the Great Wall of Hadrian. The veteran centurion of the Sixth Legion called on a young auxiliary soldier guarding this stretch of wall to bring more charcoal for their brazier. Gaius was Commander of the Watch, and would move on to the next stretch of wall after a few minutes.
“Will you tell me what ‘Vindolanda’ means, sir?” the youthful guard asked, swinging the brazier from its handle to encourage the glowing embers to embrace the new coals.
“Why would you want to know that?” Gaius replied, turning towards the brazier to warm his legs. The young man placed the brazier between the two of them and warmed his hands in a brazen egalitarian act.
“My mates won’t tell me, as if it’s their secret.”
“What is your name, boy?” Gaius asked, in a voice that suggested he was irritated by the foolishness.
“I am Amborix, sir, of the Belgic people in northern Gallia.” He stood to attention as he replied, sensing that he may have annoyed this commander of horses whom he had not encountered before.
“Well, Amborix of the Belgic, it means ‘green sky in winter’,” Gaius growled, wrapping his red cloak tightly around his leather jerkin as he shifted his gaze to the eerie green glow that now floated on the hilltops, a celestial wonder that followed dancing, twinkling stars from their daytime slumber to entertain the night watch.
“Thank you, sir – although I have been told something different,” Amborix replied, also turning to watch the shimmering lights. He was only a few months at the Wall, and had already spent his meagre wages on woollen socks and a thick tunic he wore day and night. He watched in silence as the mysterious wave of light added in new colours – red, blue, violet and yellow - as it climbed into the night sky. “This is a strange land,” he added, throwing a stone in the direction of a hoot from an owl, “and a cursed one. Our protector, Sol Invictus, will only rise from his slumber for a few short hours.”
Amborix grunted, unconvinced, and tugged at his grey cloak whilst glancing with envy at his officer’s thicker cloak and fingerless mittens. His own ill-fitting round helmet was like a piss-pot compared to Gaius’s grand centurion’s plumed helmet, which bore carved inscriptions on polished bronze and had leather cheek straps to tie under the chin, unlike his canvas straps. “These are the longest hours,” he moaned, reflecting on the day his father sold him into the service of Rome at their tribal meeting place in Gallia Belgica. He held out a coinless hand and a snow flake settled in his palm.
“I’ve served across the Empire, boy, since leaving my warm homeland in Asturia, and have seen better men than you spitted on the end of long spears, pricked by arrows or trampled under a shield press after their calves had been sliced. I’m old because I’m good at what I do. Now keep your eyes open.” In truth, his own eyesight was not what it once was, and the hills were but a blur to him. He would fail to see a man riding an elephant over them.
Amborix ignored his cantankerous commander and stooped to warm his hands over the glowing coals, remarking, “If I could bottle those coloured lights, I’d make a few denarii back home.” He stood and glanced at the hills, then froze. “Wait! I can see movement.”
Gaius leaned over a stone turret and squinted his eyes. “Where, boy?”
“Moving shapes on that hill,” he replied, pointing.
“Climb up the tower and look again.”
“It could be wolves,” Amborix said, a note of anxiety cracking his voice.
“Still, go and look. Be sharp.”
Sighing, Amborix climbed a wooden ladder to the raised platform and scanned the dark hillsides, pausing where the sickly light brought rocks and scrub into wavering relief. He shouted down, “I can’t see anything moving. But it’s so dark. Shall I call out the guard?”
“Are the hairs on your neck tingling, lad? Can you feel them out there watching you?”
Gaius marched along the parapet and proceeded to wind back the string on a ballista and load a wooden bolt with a sharp iron tip into the groove. He took a torch and lit it from the brazier, placing it in a cradle above the weapon. “Don’t go quiet on me, boy – keep your reports coming.”
“Something moved, I think but… Shall I ring the bell?”
“Trust your judgement. If you believe you saw creeping barbarians, ring the bell.”
The gods were winking in mischief above the dancing, coloured lights; then one star left the others and sped across the sky. “Another bad omen,” Gaius muttered under his breath as he peered into the darkness. “First owls, and now the gods are throwing fireballs.” He busied himself lighting more torches, then shouted across at the next stretch of wall for the guard to be vigilant. He turned to the tower and bellowed, “Report!”
“Nothing. Maybe I saw…” Amborix’s voice gave way to a groan and Gaius turned to see the young man stagger, an arrow shaft protruding from his shoulder.

Read for Free with #KindleUnlimited subscription 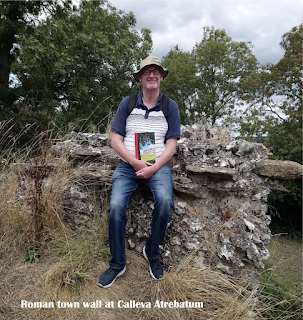 Tim Walker is an independent author living near Windsor in the UK. He grew up in Liverpool where he began his working life as a trainee reporter on a local newspaper. After studying for a degree in Communication studies he moved to London where he worked in the newspaper publishing industry for ten years before relocating to Zambia where, following a period of voluntary work with VSO, he set up his own marketing and publishing business. He returned to the UK in 2009.
His creative writing journey began in earnest in 2013, as a therapeutic activity whilst recovering from cancer treatment. He began writing an historical fiction series, A Light in the Dark Ages, in 2014, inspired by a visit to the part-excavated site of a former Roman town. The series connects the end of Roman Britain to elements of the Arthurian legend and is inspired by historical source material, presenting an imagined history of Britain in the fifth and early sixth centuries.
The last book in the series, Arthur, Rex Brittonum, was published in June 2020. This is a re-imagining of the story of King Arthur and follows on from 2019’s Arthur Dux Bellorum. Both titles are Coffee Pot Book Club recommended reads. The series starts with Abandoned (second edition, 2018); followed by Ambrosius: Last of the Romans (2017); and book three, Uther’s Destiny (2018). Series book covers are designed by Canadian graphic artist, Cathy Walker.
Tim has also written three books of short stories, Thames Valley Tales (2015), Postcards from London (2017) and Perverse (2020); a dystopian thriller, Devil Gate Dawn (2016); and three children’s books, co-authored with his daughter, Cathy – The Adventures of Charly Holmes (2017), Charly & the Superheroes (2018) and Charly in Space (2020). 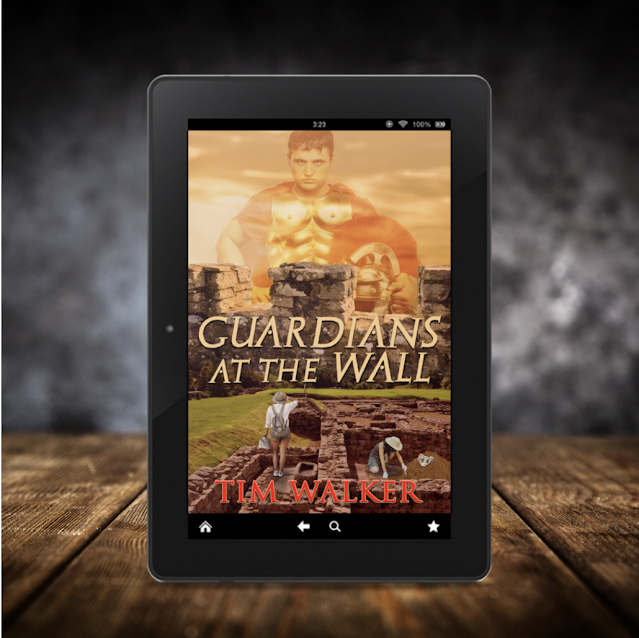