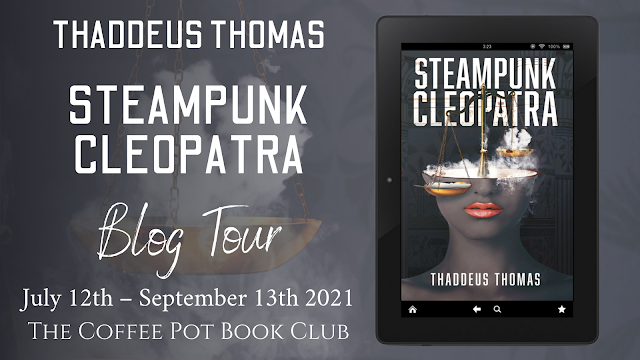 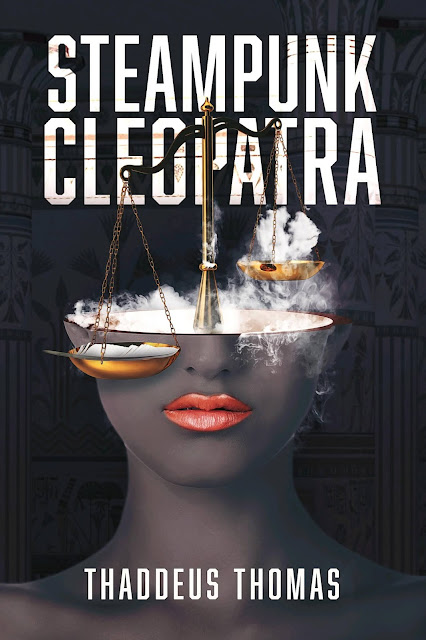 Publication Date: 21st May 2021
Publisher: Independently Published
Page Length: 419 Pages
Genre: Historical Fantasy
Amani, a companion of Cleopatra, seeks to rediscover Egypt's suppressed science and history. She is the beloved of her princess become queen, but that may not be enough to overcome the system they've inherited. If she fails, her country and Cleopatra, both, could fall. History meets fantasy, and together, they create something new. Experience an intelligent thriller about star-crossed lovers and an ancient science that might have been.

When Amani was six years old, I took her to the Museum—literally, the Shrine of the Muses--and its Royal Library. The Library’s adjoining buildings, accumulated across the centuries, rose several stories high. Scholars from all over the world had once come to study, teach, and discover. The Museum’s glory had diminished in recent generations, but she remained both the envy of every civilized nation and the joy of those who knew her best.
The most ancient of the Library’s buildings was now the northwest quarter, which abutted the horticultural gardens and faced the harbor. Two bold and grand staircases cascaded underground to meet in an expansive chamber. Interspersed with strange hieroglyphs, figures of ancient gods decorated the chamber’s main wall. Arched windows high above let in streams of light, and the white walls sparkled. As unused as the area might be, we never left it neglected.
“This is the oldest part of the Library,” I said, “and we have no idea what it's for.”
“The oldest-oldest?” Amani asked.
“The very oldest,” I said, “dating back to the very first Pharaoh Ptolemy.”
“Was it for very old books?”
I smiled, shook my head, and sent her to explore. On the north side, across from the stairs, were several doors but only two rooms. All the doors but one opened into a large room full of ruined machinery.
The last door, the westernmost door, entered a room where a metal arm held a great wheel.
Amani stared. “No one knows what it does?”
“It does nothing, anymore.” I extinguished the last wall lamp and led her back into the main hall.
I sat on the floor to teach. Amani stood. I had won the job of training her for two years, to prepare her for Cleopatra’s choosing ceremony. As small and innocent as she was, the responsibility intimidated me. I took a deep breath and smiled at her. A dark Egyptian of Nubian descent, she was a wiry wisp with skin like a starless sky. She had a broad face and big eyes; pretty, but not so beautiful as to shame a princess.
“There are always two rulers,” I said, “one male and one female. We educate them equally to carry the weight of leadership alone if the other is ever unable.”
“What do you think the machine does?”
“Don't give it another thought,” I said. “Marriages aren't always brother and sister. Often, they're cousins.”
“The male Ptolemies are named Ptolemy,” I said.
She was about to say something, bit off her words, considered what I had said, and asked, “What are the girls called?”
“They can have any of three names: Berenice, Cleopatra, or Arsinoe. The current family has used all three, and, if the fourth child proves to be a girl, they will repeat one.”
“I know other names,” Amani said. “I know lots of names.”
“They know many names as well,” I said. “Pharaoh Ptolemy has six.”
“They call him the Flutist,” she said.
For a moment, I thought to argue with her, but in the end, I only urged her never to say the name; not to Cleopatra, not to anyone.
She agreed and, I thought, considered the issue at length. “Who built the machines?”
I ignored the question. “Berenice is co-regent and the legitimate successor to the throne. Her mother was the queen, and though Cleopatra and Arsinoe are the daughters of Ptolemy's wife. Their mother was never queen.”
“Why? Will Cleopatra be queen?”
“It seems unlikely, but it's not impossible. Ptolemy himself was an illegitimate successor to the throne and was living far away when they called him back and made him Pharaoh.”
“They didn’t care that he was ill?”
“Illegitimate.”
Amani nodded.
“It’s complicated.” I took a breath. “The city asked Ptolemy to return because the legitimate sons were dead.”
Amani's eyes narrowed. “Dead?”
“It's a good system, and you must learn it well if you are to be chosen as a companion to the princess.”
“Is Berenice's mother queen?”
“Again, it’s complicated.” I considered my wording. “When the queen could not give Pharaoh a second child, they reached an agreement. Pharaoh divorced her. She would no longer be queen, but he made her co-regent with her daughter. That freed him to marry again.”
History does not remember the mother of Ptolemy’s other children. Half the Roman world believes Berenice and Cleopatra were full sisters, but we who were there know better. Cleopatra and Arsinoe's mother was the daughter of an Alexandrian princess and an Egyptian priest, and her name was Semat.
“Is Berenice queen?” Amani asked.
“Berenice is in a very difficult position.”
Amani frowned. “It's copper-plated.”
“It's a good system,” I said, “the best there is.”

This novel is available for free with #KindleUnlimited subscription.

Thaddeus Thomas lives on the Mississippi River with his wife and three cats. Steampunk Cleopatra is his first novel, but he has a short story collection available at his website, ThaddeusThomas.com. There he also runs a book club where readers can receive indie book reviews and recommendation. His second book—Detective, 26 AD—releases July 9th and follows Doubting Thomas as he is conscripted to be an investigator for Pontius Pilate. 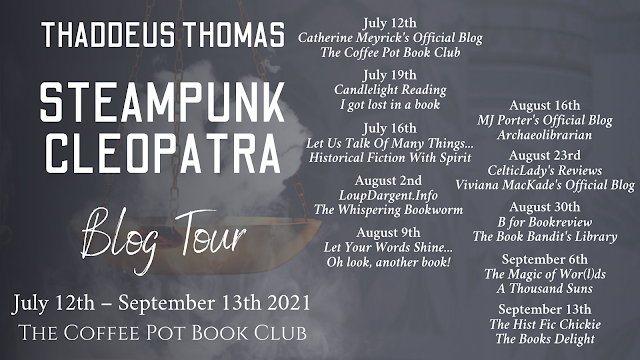