Have a sneak-peek between the covers of Nik Grybaski's fabulous book — Black Danube: A Leo Katz Mystery #HistoricalFiction #CrimeFiction @nikgrybaski 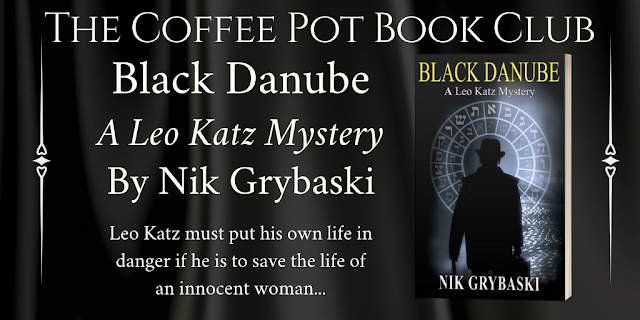 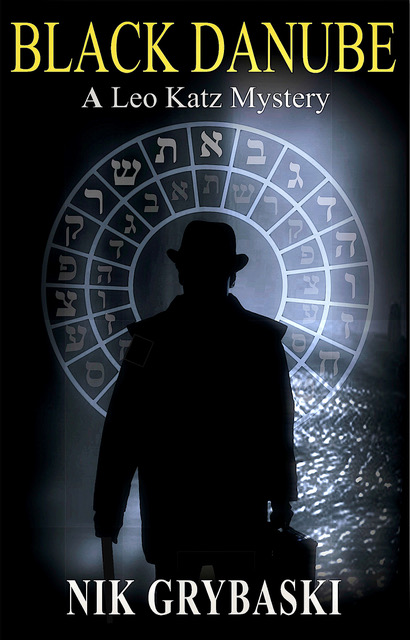 A young man is found dead, his face mutilated - his fiancée, the prime suspect.

Crime photographer Leo Katz has proof she is not guilty. But to save the innocent woman from the gallows, he risks revealing that he is a fraud and on the run.

As Leo unmasks the sordid network of vice behind the city’s elegant facades, he realises the gruesome death is a smokescreen for more depraved crimes.

Can he face his demons, expose his true identity, and put his life in danger to bring the murderers to justice?

I stood on the platform of the Kaiser Franz Josef Railway station in bare feet. I had no luggage or hat. People shuffled past, taking side-long looks, shaking their heads as if to say, ‘Ah, another penniless immigrant. Vienna is going to the dogs.’

The top two buttons on my dark brown waistcoat popped open. I clutched at my chest, hunched my shoulders, and pulled my gaberdine tight to hide my defective attire. A high-pitched whistle blew and a cloud of light grey smoke surrounded me. Metal wheels scraping along the track screeched so loud I thought I would never hear again. Gradually, the noise faded. I wiped moisture left by the steam train from my face and tried to focus. But my eyes were fuzzy as though I had indulged in an excess of alcohol.

I unfastened my stiff shirt collar to let in some air and scuttled to the exit. Once outside I halted in front of the grand pillared entrance. Not daring to move, in case I loosened more buttons on my constrictive garments, I observed the washed out faces of men and women walking along the street. They stared ahead not looking at anything or anyone. I blinked rapidly. They shimmered and faded becoming nothing more than ghost-like figures floating above the raised wooden pavements.

A swirling wind blew the phantoms away. It caught at my coat-tails, whipping them up and down so fast I almost took to the air. I held onto them until the gusts decreased and glanced down the steps. At the bottom lay my absent black shoes. Heels broken, soles ripped off halfway, they gaped open like the mouths of dying fish.

I stumbled down the stairs and crouched by my broken footwear. Rain pelted my neck and shoulders. I raised my head. Through the rippling water that slid down my lashes, I saw gigantic eyes appear in every window of the massive grey station that loomed over me.

Standing quickly, I ran across the road, tripping over the newly installed tram lines. I stepped into a deep puddle; it splashed my trousers with blood-red water. I tore at the stained fabric with my elongated fingernails and ripped the garment from my legs, revealing white bloomers that flapped in the wind like an injured bird trying to take off. I attempted to cover the underwear with my hands, but my fingers turned into dumplings and melted.

‘Kazab!’ Yelled an old flower seller dressed in a voluminous white high-necked blouse and billowing black skirt. Her face was so wrinkled it caught the water that fell in the deep crevices of her cheeks. She grasped a bunch of dead roses, held them before me and shouted louder than before, ‘Kazab!’ I put my hands over my ears but her cry of, ‘Kazab!’ was deafening. My knees buckled, and I fell to the ground. ‘Kazab!’ She screeched the word over and over. It pounded my head like rocks being thrown. ‘Kazab! Kazab!’

They say the truth hurts, and it does, for I am indeed a liar.

The images dispersed, I opened my eyes to darkness and heard my name called again.

‘Herr Katz? Are you awake.’ Rapid knocks on the door, an unfamiliar voice. Odd. ‘Sir, please, you are needed. Herr Rosenbloom sent me to fetch you. Come quick. There’s been a horrible murder.’

Where was Miriam? It was not like her to let strangers in. ‘Miriam?’ I rolled over, fumbling for some matches. ‘Miriam?’ The dream had shaken me. It always did. If I cried out after a nightmare as a child, Miriam was there to comfort me with a whispered song and a warm embrace. Too old now for such youthful tenderness. I sighed, groped along the bedside table for a box of Lucifers and felt something soft. I retracted my hand and called out to my aunt like I had so many times when I encountered anything small, such as a mouse, moth or spider. ‘Miriam?’

A high voice, cracking with each word. What had such an animated youth to do with me? Despite my fear of finding another unwelcome visitor, I stretched out my fingers. The familiar square box came into reach and I lit my lamp without encountering another insect. When the wick stopped spluttering and an even glow surrounded me, I got out of bed. Holding my breath, I walked to the door. I rested my ear on the wood and listened. A wet sniff, nothing more. Was I afraid of a boy? I was a grown man. What had I to fear? I placed my hand on the knob ready to open it, but I stopped at the sound of Miriam’s voice.

I looked down at my rumpled night shirt unbuttoned to the navel. ‘Ah, no. Do not come in. Who is our…’ I opened the door to a crack and peered out. ‘Who is here so early?’

‘Herr Rosenbloom’s boy. You know, Aaron, the son of his housekeeper.’ Miriam, hair dishevelled, carrying an oil lamp, stood behind a thin youth.

‘Come quickly, Sir. You are to bring your special camera.’

‘Where is the location?’

‘Nowhere you’d know, Sir. It’s in the Matzoh Island quarter in Leopoldstradt, Stuwerviertel, not far from the Prater.’ I raised my eyebrows and shrugged. ‘No? Well, it’s of no matter, Sir. I doubt you’d know the place unless you, well…’ he paused, ‘like to visit ladies who charge, you know, for, things. Anyway, Herr Rosenbloom says I must take you, since I worked in the bakery in that part of the city, until mama got the job in his house. We owe him so much and…’

Miriam swiped his shoulder. ‘Enough chatter, boy. I thought you were in a hurry?’

‘I am, Fraü Vogel. The police want to take the body away, but Herr Rosenbloom has managed to make them wait until you get there to take some photographs for his records, and theirs, so he said. Then he muttered something about things not being right, stuff like that.’

‘All this gushing will only add to the time. Now, come with me. I’ll give you some bread and a hot drink. Let’s leave Herr Katz to dress. Come down when you’re ready, Leo.’ She gently pushed him towards the staircase.

He twisted his head round just before descending. ‘I’m to stress that you are to be as quick as can be. The police are very eager to take the body. It’s right there in the street with folk moaning and crying. I haven’t seen it though. There’s been an arrest. His fiancée. What do you think of that?’

Miriam gave him a sharp shove between his shoulder blades. ‘Down to the kitchen boy, enough said.’

I closed the door, hurried to my wardrobe, took out a shirt, trousers and waistcoat, and put them on. Then I opened my collar draw, selected a narrow rim and clipped it onto my shirt along with a dark blue short-tongued tie. Opening my jar of Henkel & Cie pomade, I scooped out a small amount of the soft waxy substance and fingered it through my unruly locks. Parting my now smooth hair on the right, I paused to look in the mirror. Strange to see a perfect gentleman looking back.

I slid on my shoes and fastened the metal buttons with the hook iron. I stood, opened the top drawer of my writing desk, reached behind the paper, blotter and pens for my spy camera in the shape of a watch. I checked it was loaded, then knelt, and dragged out my bag. It contained my official bellows camera, Blitzlicht flash gun with spare powder. I picked up my tripod and went down to the kitchen.

The grandfather clock in the hallway chimed the hour. I yawned, not used to being awake at three in the morning. A waft of Miriam’s sweetened hot coffee brought back memories of my childhood when nightmares had me shrieking in terror. She would bring me such a brew loaded with hot milk. Together we would sip as she told me tales of mythical creatures and heroes from the past. She gestured for me to sit. I shook my head. ‘No time. Come, Aaron, finish your drink. Lead me to the crime scene.’ He gulped down what remained in his cup, stood, bowed to Miriam, and exited into the damp night air.

Miriam stalled me in the hallway. ‘Don’t forget your gaberdine and hat. The rain is heavy. You don’t want to catch a cold. And, well, be careful with the boy. Don’t let him get too near. Or you get too close to him, or, oh I don’t what I saying anymore. You know what I mean. We have to be careful.’

‘Always.’ I snatched my knee-length coat from the hook on the wall and hastily put it on. Pulling up the collar and pressing my hat onto my head, I met Aaron on the street. His thick, curly hair stuck to his face. He blinked away raindrops and shook off the excess water from his flimsy jacket like a dog.

He held out his hand. ‘Shall I take the three-legged stick for you?’

‘Yes, thank you, the tripod is unwieldy.’ I gave it to him. He pointed ahead.

‘This way, Sir. No trams yet, still too early. I haven’t seen a cab. Still, it shouldn’t take long if we walk fast. Maybe half an hour if we take it brisk-like.’

I nodded and followed him closely through the dark alleyways I never frequented.  Hurrying along this narrow passageway with arches connecting neighbouring buildings, I realised how different Vienna was to my rural upbringing. More used to the sounds of chickens clucking than the ear-splitting barking of dogs and screeching cats, I became somewhat agitated. I’d been here almost two years, yet these partly lit roads with claustrophobic tenement buildings caused me to take deep breaths to calm my juddering heart. It wasn’t until we reached Rotenturmstrasse that the roads widened, and I relaxed. 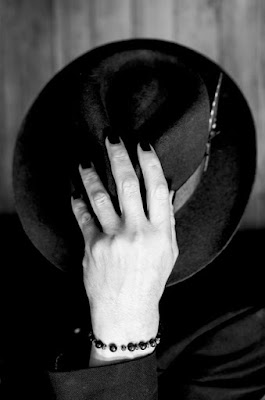 Nik Grybaski lives in the shadows of the worlds Nik creates.

A writer, photographer, baker and gin enthusiast, Nik enjoys nature and watching obscure black and white films. Nik has been writing for many years. Sharing stories but never publishing them, until now. Black Danube came to Nik when he was washing away cat wee from the kitchen floor. To this day Nik does not know how cleaning inspired this book.