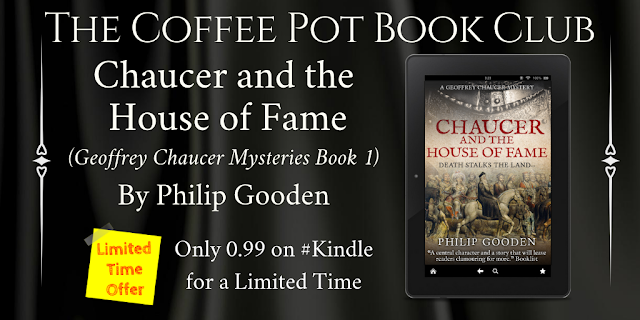 A Conversation with author 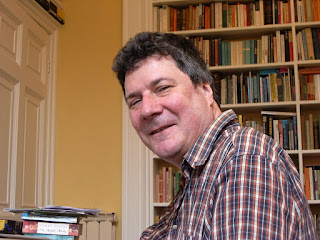 Mary Anne: Hi Philip, I am so glad you could stop by and chat with us today. A huge congratulations on your fabulous series, Geoffrey Chaucer Mysteries. Could you tell us a little about your books and how you came to write them?

Philip Gooden: Thanks, Mary Anne. It’s good to be featuring on your blog.

I started writing fiction with a series of historical mysteries set around Shakespeare’s Globe theatre in Southwark. For my next series, I jumped back a couple of centuries and fastened on Geoffrey Chaucer as a central character.

Why Chaucer? Quite apart from his poetry, he had an intriguing, eventful life, parts of which are still obscure. As a young man he’d been a member of the household of Lionel, Duke of Clarence, one of the sons of King Edward III. Still under 20, he fought in one of Edward’s interminable campaigns in France, where he was taken prisoner and ransomed.

Later on, Chaucer travelled to Italy and Spain on diplomatic missions for the king. He came from what we’d now consider a middle-class background - his father was a wine merchant - but he was upwardly mobile, and a natural networker. His sister-in-law was Katherine Swynford, who eventually became the third wife of John of Gaunt, another of Edward’s sons.

So, having Chaucer operate as an agent, half-diplomat, half-spy, seemed quite plausible. In the first book, Chaucer and the House of Fame, he returns to Aquitaine to the castle of the nobleman who had been his captor years before. In the second. Chaucer and the Legend of Good Women, he travels to Florence to borrow money on the king’s behalf - money required for warfare, of course.

Mary Anne: Why do you think Chaucer’s work is still so incredibly popular? And what made you decide that the father of English poetry would be the perfect protagonist for your series?

Philip Gooden: Not so many people read Chaucer in the original Middle English (though he’s not as difficult as all that) but his stories, and especially the Canterbury Tales, are very well-known in modern versions. The group of narrators, pilgrims on the way to the shrine of Thomas à Becket in Canterbury cathedral, showcase a cross-section of medieval society from knights to con men, from refined prioresses to much-married women of the world.

The artist William Blake did a frieze of the pilgrims on the road and sections of it provide the covers of the books in my series. They make great covers.

The idea of people telling tales to pass the time is as old as the hills. The stories themselves can be noble or bawdy, high-minded or cynical, and often come with a pleasing twist. In each book in the Medieval Blood series, I’ve taken one or more of these Canterbury Tales and incorporated it into the action. Whether Chaucer was a detective or a spy is debatable, but one thing is certain: he was a fine story-teller.

The man himself is shadowy. In his writing, he comes across as shrewd, tolerant, inquisitive - all qualities that make for an intriguing protagonist, and especially one who delves into mysteries.

Philip Gooden: One of the surprises is how much people travelled in the Middle Ages. We think of the medieval population, apart from the king and his court, as not venturing far beyond the confines of their village or town. While this would have been the case for many, there was still plenty of movement. Trade, commerce and warfare entailed travel. Pilgrimages seemed to have functioned as the medieval equivalent of a package holiday, to judge by the bustling high spirits of the Canterbury pilgrims and their appetite for food, drink and fun. And Chaucer himself journeyed in western Europe, something Shakespeare never did.

Philip Gooden: The hardest part, I think, is trying to put yourself in the mindset of people who lived hundreds of years ago. Human nature may not change much, which is one reason why Chaucer’s observations about people still ring true, but circumstances change, as do manners and customs.

For example, it’s difficult for us to envisage to imagine a society so permeated by religion and the church as was Chaucer’s era. A third of the pilgrims riding to Canterbury in the 1380s and telling their tales are directly connected with organised religion. It is literally their life and their livelihood even if several of them, like the well-fed monk with his taste for hunting, fall short of the ideal while others, like the Pardoner passing off sheep’s bones as saint’s relics, are actively corrupt.

Another hurdle is the kind of language to use. To have your characters speak ‘Middle English’, even if it were possible to imitate, would make your story of limited interest, if not completely incomprehensible. But to use a very contemporary style - ‘Way to go, Chaucer!’ - is going set some people’s teeth on edge, and it detracts from the slight sense of ‘otherness’ you need in historical writing. So maybe something in the middle, Goldilocks-style, not fusty but not employing this morning’s slang either. That said, there are historical writers who write very successfully in a contemporary style, Lindsey Davis, for example.

Philip Gooden: The story comes first. Don’t get hung up on historical accuracy. Respect the facts but don’t be a slave to them. Chaucer wrote happily about life in ancient Troy, in his long poem ‘Troilus and Criseyde’, without the benefit of historical or archaeological research.

Mary Anne: Thank you so much for stopping by today!

If you would like to find out more about Paul’s fabulous series, the Geoffrey Chaucer Mysteries, then you know what to do SCROLL DOWN!

The Medieval Blood series is a group of four mystery novels featuring Geoffrey Chaucer, the author of the Canterbury Tales. Chaucer was never ‘just’ a poet.  He was a soldier when young, and an emissary for the king later on. He was a courtier with a head for business and an active public life.

In the first book in the series, Chaucer and the House of Fame, he returns to France, where he fought (and was ransomed after capture) as a young man. Chaucer’s mission is to ensure the loyalty of a prominent nobleman in Aquitaine, the vast region in central France which was under English control. Needless to say, things do not go smoothly. 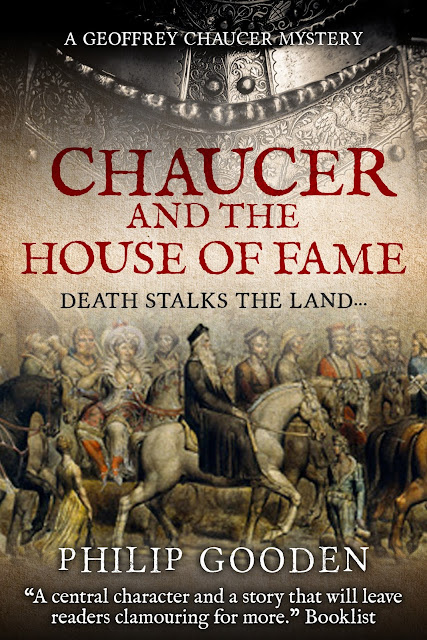 The second book, Chaucer and the Legend of Good Women, sees Geoffrey in Florence, the city of Dante and Petrarch, poets he much admired. Now he has to negotiate a loan on behalf of the English king from a Florentine banker. But a suspicious and peculiar death disrupts Chaucer’s plans and endangers his own life. 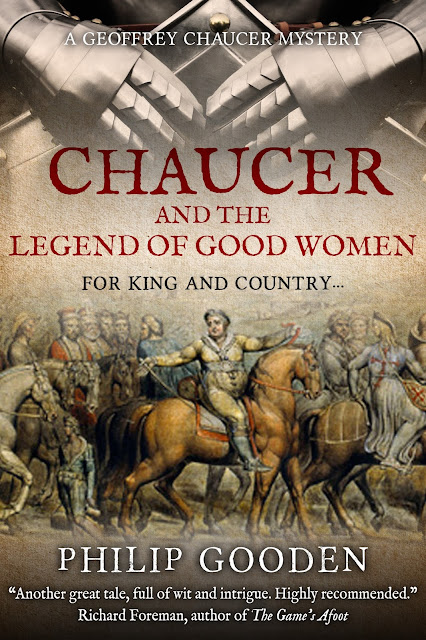 Chaucer and the Doctor of Physic is set in Devon, among alchemists, wreckers and murderers. The principal location, a medieval mansion on the River Dart, is a deliberate echo of Greenways, Agatha Christie’s fine house overlooking the river. 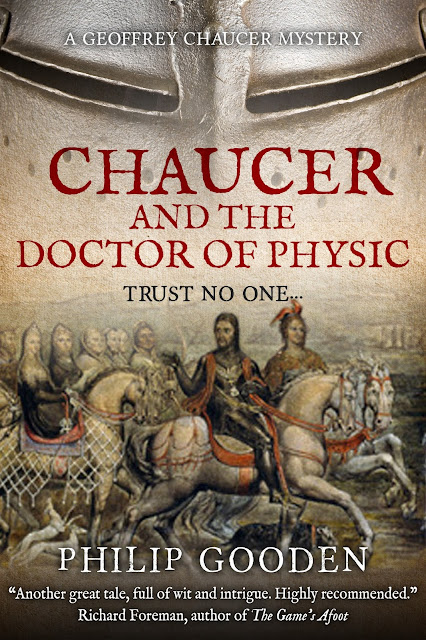 The fourth book, Chaucer and the Vintry Ward Death, introduces us to Chaucer as a young man in 1359, on his way to fight in the French wars. It’s a murder mystery but also features a storyteller in the Tabard Inn in Southwark, the kind of storyteller and tale which might have inspired Geoffrey Chaucer in his own Canterbury Tales. 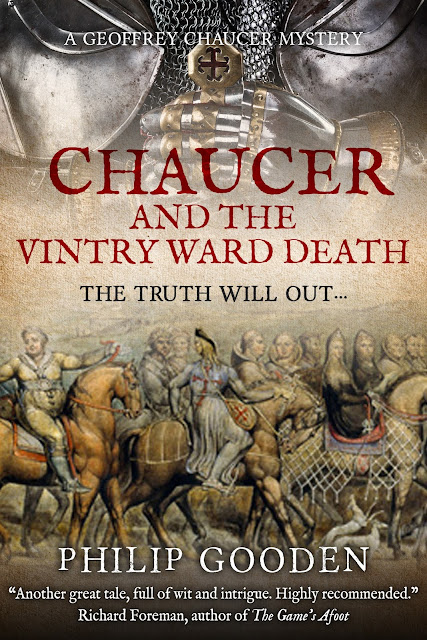 Pick up your copies of the 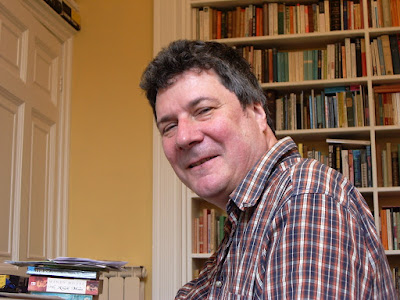 Philip Gooden writes fiction and non-fiction. His historical stories are set in the time of Chaucer, in Shakespeare’s London and in the cathedral cities of Victorian England. The Pale Companion, one of the Nick Revill Elizabethan mysteries, was shortlisted for the Ellis Peters Historical Dagger. Philip also writes books on words and language including The Story of English, Who’s Whose and the award-winning Faux Pas. His most recent book is Bad Words, which is about bad language (and other matters). Philip was chairman of the UK Crime Writers’ Association in 2007-8.