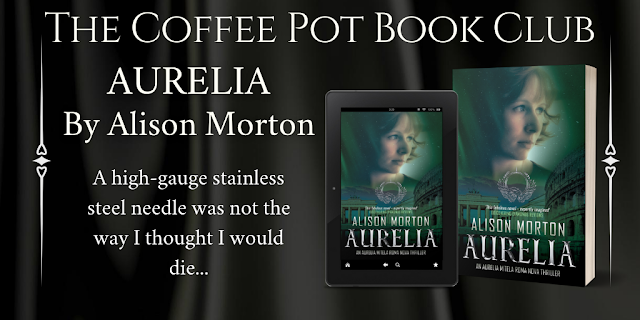 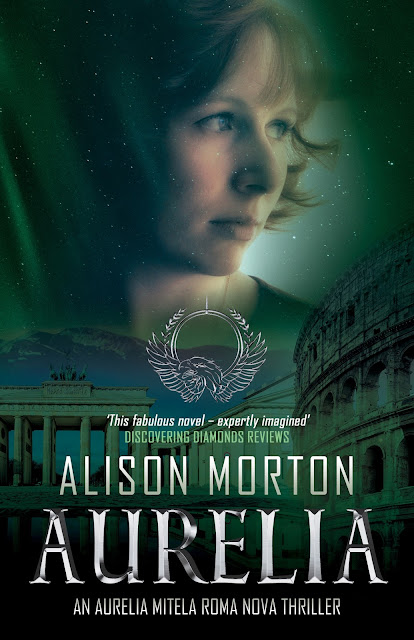 “A high-gauge stainless steel needle was not the way I thought I would die."

Late 1960s. Roma Nova is haemorrhaging silver – its lifeblood since dissidents founded the country at the dusk of the Roman Empire. Ex-Praetorian Guard officer Aurelia Mitela is sent undercover to Berlin to investigate.

Should she pursue the mysterious and attractive Miklós, a suspected smuggler, or Caius Tellus, a ruthless and amoral Roma Novan she discovers operating in Berlin and whom she has despised and feared since childhood?

When her enemy strikes at her most vulnerable point, Aurelia must make an agonising decision – her country, her love or her child?

First in the Aurelia Mitela adventures, where Roman fiction is brought into the 20th century through an alternative history lens. INSURRECTIO, NEXUS (novella) and RETALIO follow on.

“The action and drama are relentless; the climatic conclusion heart-stopping stuff”

“Anyone interested in Roman history will enjoy the concept – and as this one is set in the sixties, it ticks all the boxes and deserves to be selected as Editor’s Choice.”

“A racing climax and a fully satisfying ending"

I left my side arm in the safe box in the vestibule and walked on past the marble and plaster imagines, the painted statues and busts of Mitela ancestors from the gods knew how many hundreds of years. Only the under-steward was allowed to dust them; I’d never been permitted to touch them as a child.

My all-terrain boots made soft squelching sounds as I crossed the marble floor. This was the last private time I’d share with my mother and daughter for three weeks. A glance at my watch confirmed I had a precious hour.

My mother, sitting on her favourite chintz sofa facing the entrance, looked up as I appeared. Two tiny creases on her forehead vanished when she stood and walked towards me with her arms extended. She greeted me with an over-bright smile.

I bent and kissed her cheek then looked over her shoulder to where my daughter, Marina, was sitting quietly on the sofa. She was twisting her hands together and glancing in as many different directions as she could.

‘Marina, whatever is the matter, sweetheart?’ I strode over and crouched down by her. She stretched her hand out to grab mine and pointed at the chair in the far corner.

‘Aurelia, how lovely to see you,’ he said in a warm, urbane voice.

Taller than his brother Quintus who nearly topped two metres, Caius was well built without being overweight. Sitting at his ease, one leg crossed over the other, he ran his eyes over my face and body. His hazel eyes shone and his smile was wide, showing a glimpse of over-white teeth through generous lips. Nothing in his tanned face with classic cheekbones would repel you on the surface. Others considered him very good-looking with almost film star glamour and charm. I knew better what kind of creature lay underneath.

Even as a kid he’d had a vicious streak; I’d never forget his hand clamping my neck, forcing my face down into the scullery drain, him saying he’d drown me in filth. I’d retched and retched at the smell of animal blood, the grease and dirty water. In the end, the cook had found us and hauled Caius off. I’d crouched there sweating and trembling; only horseplay, Caius said and laughed. The cook had given him a hard look, but the other servants were won over by Caius’s boyish smile.  But when he’d stuck his hand up my skirt and tried to force me at Aquilia’s emancipation party, I’d kneed him in the groin so hard he couldn’t stand up for hours. I’d been in the military cadets for a year by then. But the others, woozy from wine and good spirits, gave him more sympathy as he writhed around on the terrace, playing to the audience.

He was a taker in life, a callous one. I loathed him with all my heart and soul. I stood up, shielding Marina behind me.

‘Dear me,’ he said, ‘are you off playing soldiers again?’

I should have been given top marks for not slapping the smirk off his face.

‘Caius,’ I said, keeping my voice as cool as possible. ‘We’re having a private family lunch before I go on an extended operation, so I hope you’ll excuse us.’

My mother cast a pleading look at me. I closed my eyes for a second. She’d invited him to join us. How could she have?

I chewed my food slowly to try to reduce my tension. The servants flitted in and out with the food, and I said very little except to Marina, who ate very little.

Before I could answer, Caius intervened. ‘She does look a little pale. Don’t you worry, Felicia, that she takes on too much sometimes?’ He tilted his head sideways and pasted a concerned expression onto his face.

I speared a piece of pork and sawed through it like a barbarian. I knew Caius was trying to make me rise to his bait, but I refused to play. At least my work as a Praetorian soldier was serving the state. He served himself with his gambling and whoring. He put in just enough hours at the charity committees he nominally sat on to appear to be contributing to Roma Novan life.

My mother smiled at him. ‘Yes, I do wonder. She was so exhausted after that last exercise abroad. You really understand, don’t you, Caius?’

He extended his hand and grasped hers and smiled. I was nearly sick.

‘“She” wasn’t exhausted,’ I cut across. ‘It was food poisoning, as you know very well, Mama. And it was all over within thirty-six hours.’

Caius smiled at me this time, but it didn’t reach his eyes. ‘Your mother’s right, you know. You have a duty to look after your rather, er, small family.’

I stood up and threw my napkin on the table.

‘The day I need you to teach me my duty doesn’t exist, Caius. Keep your nose out of my family affairs.’ I held my hand out to Marina, but fixed my gaze on my mother’s face. ‘I’m sure Nonna will allow you to leave the table now, Marina. We’re going for a walk outside in the fresh air.’

My mother gave a brief nod. I caught Caius’s second smirk out of the corner of my eye. One of these days…

Marina and I crossed the terrace and wound through the formal parterres and reached the swings at the side.

‘Nonna wants me to be friends with Caius Tellus,’ she said, ‘but I don’t like him. He makes me feel funny.’ I hugged her to me. She was so fragile; fine red-brown hair and a delicate face, light brown eyes like a frightened rabbit, not the bright Mitela blue like mine and my mother’s. Never robust, Marina had coughed and wheezed her way through infancy, floored by the least infection.

My heart constricted as I recalled yet again that terrible day when she was just two. I’d rushed back, heart pounding, from the training ground. Still in my dusty green and brown combats, I’d stared down at my daughter; white, inanimate. I’d dropped to my knees and touched her forehead. Damp, cold, sweating. Her hand was equally chill. The nurse had wrapped her in light wool blankets and bonnet to prevent body heat loss and a drip line ran from her nostril up to a suspended plastic bag on a steel stand. I was a major in the Praetorian Guard and commanded some of the toughest soldiers in Roma Nova with the most modern weaponry on the entire planet, but I’d never felt more powerless.

Now I had to protect her against a subtler virus.

‘You don’t have to be friends with anybody you don’t want to, whatever anybody says – me and Nonna included.’

‘But Nonna said it was important. I have to get used to it for when he comes to live in our house.’

I stared at Marina. What in Hades was my mother hatching up now? All I could hear was an angry buzz in my head, soaring to deafening levels. Marina’s face tightened. She dropped my hand and shrank back.

‘It’s all right, darling. I’m sorry, I didn’t mean to scare you.’ I swallowed hard. ‘I was a bit surprised, that’s all.’ I delayed, struggling to keep my temper and not frighten my soft child. I crouched down in front of her and touched her cheek.

‘Look at me, Marina. I promise you here and now that I will never be friends with Caius Tellus. He will not come and live with me. If Nonna invites him, you and I will go and live on the farm together.’

She lifted her head, two tiny wet streaks on her cheeks.

‘And hope to die in the arena.’

listen to a sample here.
Paperback from a variety of retailers 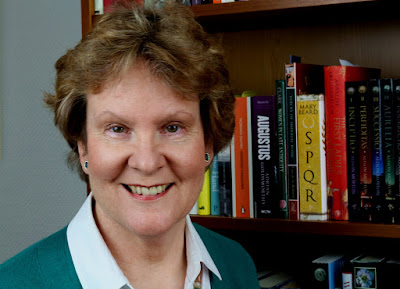 Alison Morton writes the award-winning Roma Nova series featuring modern Praetorian heroines – "intelligent adventure thrillers with heart." She puts this down to her deep love of Roman history, six years’ military service, a masters' in history and an over-vivid imagination. She blogs, reads, cultivates a Roman herb garden and drinks wine in France with her husband.

All six full-length Roma Nova novels have been awarded the BRAG Medallion. SUCCESSIO, AURELIA and INSURRECTIO were selected as Historical Novel Society’s Indie Editor’s Choices.  AURELIA was a finalist in the 2016 HNS Indie Award. SUCCESSIO was selected as an Editor’s Choice in The Bookseller. Novellas CARINA and NEXUS and a collection of short stories – ROMA NOVA EXTRA – complete the series so far. 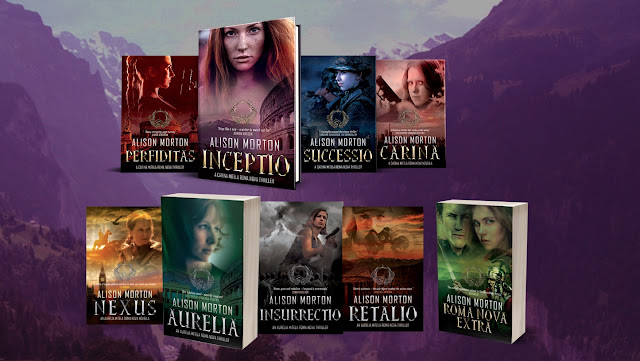