Join #HistoricalFiction author, Steven Veerapen, as he explores The Death of England’s Elizabeth and the Stuart Succession. Pick up Steven's book, Succession, for only 0.99 on #Kindle for a Limited Time. @ScrutinEye @SharpeBooks 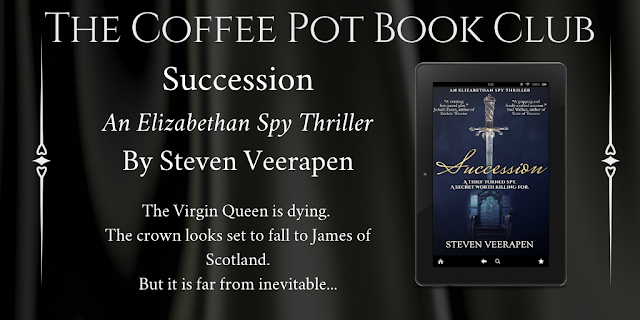 End of an Era: The Death of England’s Elizabeth and the Stuart Succession

Certain moments in history are considered turning points – recognisable shifts from one era to another. One of them is the closure of England’s Tudor age and the birth of its Jacobean period. Armed with the luxury of hindsight, we think of it as inevitable now that, when the famous Virgin Queen died, the throne sat waiting for her Scottish cousin, James, to finally ride south from Edinburgh. However, as I discovered through my research (my primary job involves researching and teaching early modern literature), the succession of King James VI of Scotland as James I of England was not quite as certain as it might seem to us. Or, at least, not until it happened.

In the first year of Elizabeth’s reign, she famously declared before parliament that ‘this shall be for me sufficient: that a marble stone shall declare that a Queen, having reigned such a time, lived and died a virgin’. This did not deter parliament from trying to convince her to marry and produce an heir and, realising that no one was taking her preference for the single life seriously, she played the marriage game for all it was worth. However, despite her many flirtations and mooted political alliances, the queen did not wed. In the early 1580s, with the departure of her last chance at marriage (for by then she was ageing at a gallop, and the menopause put paid to any useful political alliance), debates about the inevitable were re-energised. They had always existed, of course. Mortality in the Tudor era was a constant worry. Despite her legal prohibition of texts discussing the nation’s future and her haughty demands that parliament not abuse its privilege to discuss such matters, a plethora of texts circulated weighing up the potential candidates. As the 1590s wore on, and as Elizabeth aged, the names of those candidates changed, the pressing question of what would happen on her death became more acute, and the competitors were hotly debated, promoted, wooed, and discounted.

Foremost was James VI of Scotland, a Protestant descendant of Henry VIII’s elder sister, Margaret Tudor. But James was a foreigner – and legal niceties had already been invoked to bar his mother’s claims of inheritance (though the lawyers and Puritans had been satisfied with her execution in 1587) which declared that, as it was a piece of English property, no foreigner had the right to inherit the crown. His cousin, Lady Arbella Stuart, had at least the benefit of English birth, and was seriously considered by those who could stomach another female ruler. Attempts to marry her off to a descendant of Henry VIII’s younger sister, Mary, only served to make her look all the more palatable. In addition, there were Spanish claims through John of Gaunt, Lancastrian claims in the Hastings family, and a clutch of others. All of them, of course, are largely forgotten now – but at the time the issue of the succession was very much alive, even if discussion of it had to take place behind closed doors. It mattered. In the early modern period, the monarch was sovereign – he or she was a modern prime minister, president, and church leader all rolled into one.

The plot of Succession involves Ned Savage, a servant of the Revels Office (which approved or censored London’s plays and oversaw the queen’s private entertainments) and spy, tasked with discovering and foiling a plot to bar King James’s accession. Both he and the plotters, a band of English nationalists stirred up by a corrupt MP, are on the trail of a mysterious secret document containing a dark secret from the king’s past.

In the novel, however, I wanted to explore more than just the plots and politics of those last few weeks of Elizabeth’s life.

We think of the age of Elizabeth as the quintessential golden age, and no doubt for some it was. Yet, by 1603, the gilt was looking distinctly tarnished. Of the great personalities who rose to prominence at the height of her reign, almost none were still alive. Sir Francis Drake, the earl of Leicester, Francis Walsingham, William Cecil, Mary Queen of Scots, the earl of Essex – all were dead by fair means or foul. Elizabeth, at the end, stood alone, and it was popularly said that England was ‘weary of an old woman’s government’. The war with mighty Spain dragged on, the harvests had failed repeatedly in the 1590s, and a generation of malcontent young men found little service in the court of a single old lady. Elizabeth, her greatest accomplishments behind her, was becoming a choke on reform. Her motto, Semper Eadem, had become more of a threat than a promise of stability.

The people were ready for change. But what would it mean for them?

The prospect of civil war was real. Doors were locked against uprising and mob violence. As the queen entered into her final illness and the coronation ring was sawn from her finger, London entered a period of watchful fear and suspicion. Sensible citizens kept their ears open and their mouths shut, waiting on events. Life was brutal, grubby, and uncertain enough – and nothing guaranteed that what was treason one day would not become a necessity the next.

Overseeing all of this, and prominent as both spymaster and politician in Succession, was Sir Robert Cecil. Son of the late Lord Burghley, Elizabeth’s most famous chief minister, Cecil is for me one of the most interesting political figures of the entire early modern period. This is mainly because I find him surprisingly modern; he would fit neatly into an American political drama or a gangster film as easily as he would a Cold War spy thriller. Lacking the strict religious fanaticism of his father and the gung-ho, adventurous wiles of, say, Thomas Cromwell, Cecil is probably the first really modern statesman in English history. He was, as Leanda de Lisle points out in her Tudors: The Family Story (2013: Random House), corrupt.

Yet Cecil is not the only real character to rub shoulders with the fictional Ned Savage. I had a tremendous amount of fun incorporating a plethora of real-life figures who straddled the great transfer of power from England’s Elizabeth to the ferociously British James. In the pages of the novel, readers will, I hope, enjoy their glimpses of Ned’s theatrical friends and foes, including Ben Jonson and William Shakespeare; a prickly King James, who provides an audience during a visit to the Scottish court; a waning Sir Walter Raleigh, conspicuous by his feigned indifference to affairs; and the rather sad figure of Arbella Stuart, kept locked away under the care of her grandmother, the redoubtable (I have never seen her described by any other adjective, except perhaps ‘formidable’) Bess of Hardwick.

All that remains to be said is why I embarked on this book. For years I have studied the plays of the period, with an academic interest in those which touched, however obliquely (for playwrights were hardly free to be overly political) on the vexed succession question. As a Scot, I have long been interested in Mary Queen of Scots (who pops up in virtually everything I’ve had published – included, most obviously, my nonfiction study of her relationship with her brother!). However, I find that fiction is the closest thing we have to a time machine; it is the most evocative way of capturing the experiences, sights, sounds, and smells of what living through this fascinating period must have been like. I noticed, too, that the myriad of exceptional masters of Elizabethan historical fiction (Paul Walker, Anna Castle, Peter Tonkin, Patricia Finney – I could go on at great length) tend to focus on the great dramas and religious horrors of the 1580s. Those who work in the growing subgenre of Jacobean fiction (Tracey Borman, Elizabeth Fremantle) tend to focus on King James’s court during or after the infamous Powder Plot of 1605. With Succession, I hope that readers will enjoy the scandal and conspiracies attendant on the moment of change. More than that, I hope they will enjoy reading it as much as I enjoyed writing it. 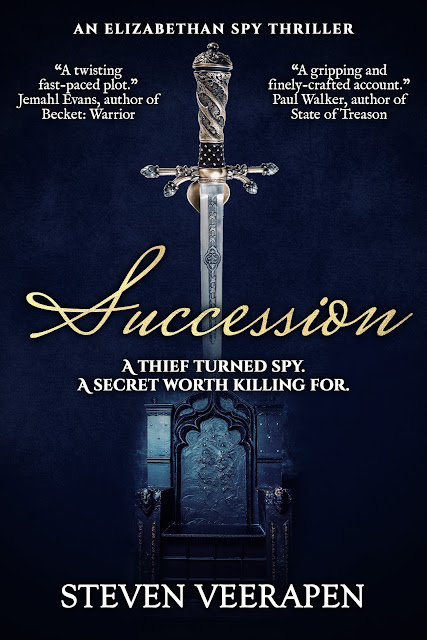 The Virgin Queen is dying. She has yet to nominate an heir.

The crown looks set to fall to James of Scotland.

But it is far from inevitable.

Gowrie, a sinister Scottish traitor, has arrived in England. On him is a document containing a shocking secret that will compromise King James.

Languishing in prison, artful thief Ned Savage is freed by his patron, the queen’s principal secretary, Sir Robert Cecil. His mission is to find the document before it can be made public. If he succeeds, his life will be spared.

But he is not alone in seeking Gowrie.

On his trail are a ruthless gang of conspirators. The Red Cross Plot aims to prevent any foreigner from taking the English throne. And the Knights of the Red Cross will kill to secure the document.

In a journey that will take him from London to Derbyshire and Scotland, Savage must foil the Red Cross Plot, protect King James’s darkest secret, and keep himself safe from execution.

And he must do it all before the curtain falls on Elizabeth’s reign.

‘A gripping and finely-crafted account.’ Paul Walker, author of State of Treason 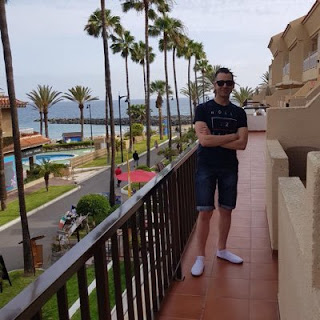 Steven Veerapen was born in Glasgow and raised in Paisley. Pursuing an interest in the sixteenth century, he was awarded a first-class Honours degree in English, focussing his dissertation on representations of Henry VIII’s six wives. He then received a Masters in Renaissance studies, and a Ph.D. investigating Elizabethan slander. Steven is fascinated by the glamour and ghastliness of life in the 1500s. 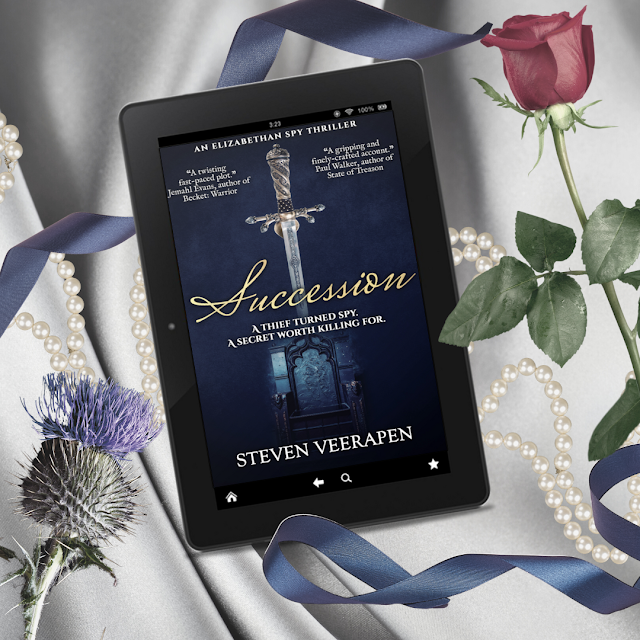