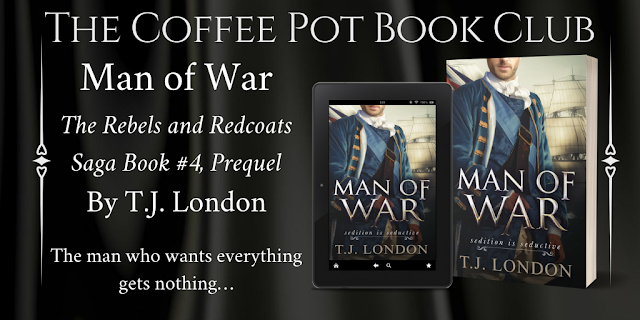 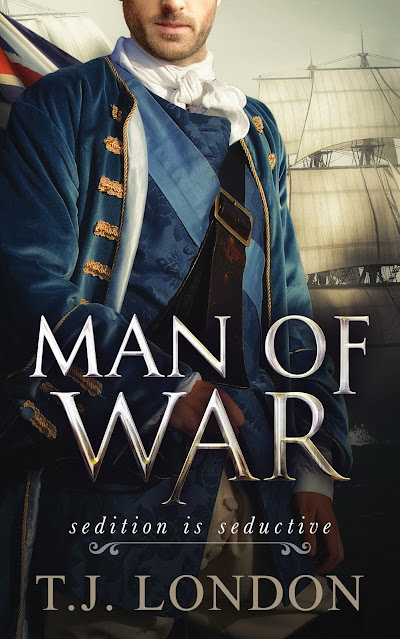 The man who wants everything gets nothing…

War is brewing between England and France. Impressed into the Royal Navy, Lieutenant Merrick, against all odds, advanced through the ranks to become an officer—but he is not a gentleman. A man with a tainted past from a traitorous family, cast down by King George—a stain no man can remove.

Merrick’s thrust into the role of captain, when the HMS Boudica is attacked by pirates off the coast of Nova Scotia. On a captured enemy vessel he discovers a King’s ransom in treasure and a woman chained in the hold from passenger ship that mysteriously disappeared at sea.

Beautiful, defiant, and hell bent on revenge, India makes a deal with Merrick to uncover the pirates’ scheme, promising him everything he desires: fortune, glory, and the chance to bring honor back to the McKesson name.

Now, they race against time to uncover a plot that links those in the highest ranks of the British aristocracy, to a failed rebellion that is once again trying to topple the monarchy and place an old pretender on the throne. But all that glitters is not gold as passions stir and an impossible love blooms, threatening to undermine all Merrick and India have done to protect their King and a country on the brink of war.

***This book contains graphic content and depictions of war***

“Captain, quick! There’s a woman trapped down here! She’s chained to the wall. We need something to get her out. Look for keys or something to break a lock.”

Merrick took a deep breath and thrust a shaking hand through his hair. They were fast running out of time. Turning in a circle to the right, he searched the deck; all around him there were six-pounders lashed to the walls, rammers, worming irons, linstocks, but nothing he could use to pick a lock. Damn.

The galley. Merrick rushed around the companionway and through the archway into the kitchen, and then he got down on his knees and dug through the mess of utensils lying on the floor. He managed to find a butter knife and a large, cast-iron poker. It would have to do.

The Culloden creaked, the wood protesting the weight of water straining the hull, threatening to render the ship in two. He grabbed a rammer from the deck head above and made for the hatch that led down to the hold.

“Sykes!” Against the larboard hull, he could see the flicker of a lantern, the loud grating of metal rubbing against metal reverberating back at him. The woman’s head was all that was visible above the water, her chin thrust up, trying to keep from submerging completely. When he reached the bottom of the stairs, the water was already above his hips, the skirts of his tunic feeling heavy as they saturated and clung to his legs.

The woman’s wrists were in irons and chained to the hull above her head. Sykes was using the hilt end of his cutlass to pound the metal fastener, leaving behind little nicks but doing nothing substantial.

“Here, let me.” Merrick took the blunt end of the rammer to the iron ring several times, using every bit of strength he possessed. The woman squeezed her eyes shut, but she didn’t yell or scream; it was as if she had unyielding faith they would free her, though Merrick wasn’t so sure.

He pounded away at the lock—once, twice, three times—but she kept her eyes closed, never once looking up, only flinching with each blow of the rammer against the metal.

“I’ll get you free. Just hang on.” Merrick said that more for his benefit than hers.

As he went for the lock again, he stopped with his hands in mid-thrust, arrested by the most exquisite aquamarine eyes he’d ever seen. Their color was so brilliant and blue that even in candlelight they rivaled Caribbean waters after a summer storm. She was cloaked in darkness, but he could tell the woman had fair, porcelain skin and delicate, high cheekbones, though the left side of her face was smeared with a thick layer of sludge and dirt that stretched from the corner of her eye to her lips like a half mask.

His heart took off in a sprint, an instant connection forged between himself and the mysterious, unfortunate woman at his mercy. He felt rather like a romantic hero, or a knight on a white horse come to the rescue, and she the damsel in distress. If he could get the damned shackles to open, he could see their fairy tale to completion. “These irons are a pain in my arse.”

Not the most gallant first words to his lady fair, but there was no time for propriety. “Just hold on, miss. Don’t be afraid.”

She nodded then closed her eyes, water rushing up, submerging her chin and filling her mouth.

When she came up in the lieutenant’s arms, she coughed, gagging on water and thick, putrid bilge sludge. When Merrick looked into her beautiful eyes again, the fear he saw gave him the strength of ten men drawing up the Boudica’s anchor through mud with an old, moldy capstan.

Pulling back, he rammed the shackles several times, expelling his pent-up angst into the metal until it finally succumbed to his will and bent. “I think I’ve got it!” Mustering up a groan from deep in his gut, he thrust the rammer into the irons again; only that time, the ring gave way. The woman let out a gasp a split second before she slipped through Sykes’s arms and submerged into the darkness, her shackled arms weighing her down.

Add Man of War to your ‘to-read’ list on

T.J. London is a rebel, liberal, lover, fighter, diehard punk, pharmacist, and author who loves history. As a storyteller, her goal is to fill in the gaps about missing history, those little places that are so interesting yet sadly forgotten. Her favorite time period to write is, of course, the American Revolutionary War (is there any other time period?). She also enjoys researching the French Revolution, the French and Indian War, the Russian Revolution, and the Victorian Era. Her passions are traveling, writing, reading, cycling, and sharing a martini (no more wine, I’m a migraineur) with her friends while she collects experiences in this drama called life. She’s a native of Metropolitan Detroit (but secretly dreams of being a Londoner) and resides there with her husband, Fred, and desperately misses her beloved cat and writing partner, Mickey, who passed away just as she finished MOW.

But there is another cat writing partner in her future… and plenty more Revolutionary books!