Check this out! Mary Morgan is sharing an excerpt from her fabulous #NewRelease — MAGNAR: The Wolves of Clan Sutherland, Book 1 #Scottish #paranormalromance @m_morganauthor 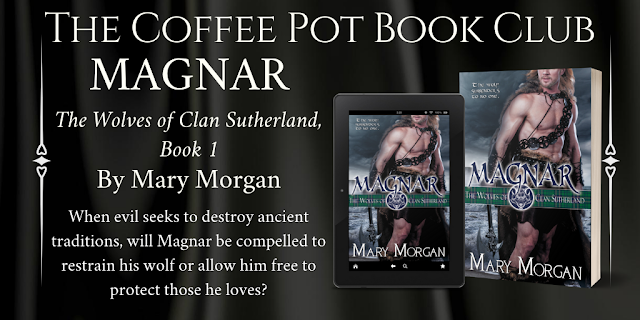 The Wolves of Clan Sutherland, Book 1 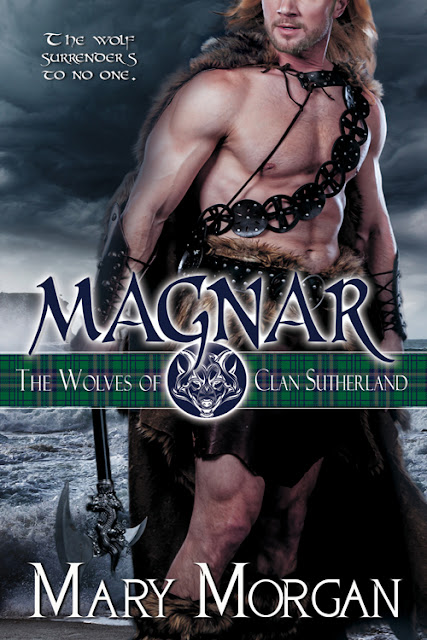 Known as the Barbarian, Magnar MacAlpin is a fierce ruler for those under his command. As leader of the Wolves of Clan Sutherland, his loyalty and obedience lies with Scotland. However, the king’s last demand is not something Magnar will tolerate.

After Elspeth Gunn’s brother the Chieftain of Castle Steinn is murdered, she flees with her nephew, and finds safety amongst a band of men who are rumored to be part wolf. When the king forces her to wed a heathen Northman, she fears losing her heart and soul not only to the man, but to the beast as well.

In order to restore peace to a shattered clan, Magnar and Elspeth travel a treacherous path that challenges their beliefs. When evil seeks to destroy ancient traditions, will Magnar be compelled to restrain his wolf or allow him free to protect those he loves?

Turning from her censure, Magnar went back to the stream. “I understand I am not a husband you favor. Nevertheless, as marriage to me, we can undo this pact your brother made.”

She stomped the ground with her foot. “I will not be forced to marry a…a heathen!”

He gritted his teeth—her words sparked outrage from his inner beast. Glancing over his shoulder, he offered, “Then which would you prefer? Halvard or me? Make your choice, Elspeth. Did you not consider I do not favor this union either?”

Confusion marred her features. She fisted her hands on her hips and glanced upward. “Did you argue against this marriage with King William?”

“Yet he convinced you?”

When she returned her gaze to him again, resolve and a bit of stubbornness filled them. “Why, Magnar?”

“The king will permit me to continue with my duties with the elite guard, including an important task which requires my attention after our marriage.”

Chewing on her bottom lip, she nodded slowly. “Then you will be absent most months from Steinn?”

“Most assuredly, and when I am there, Erik will be my focus.”

Her face softened as she moved slowly toward Magnar. “Therefore this marriage is in name only for Erik’s protection, aye?”

Annoyed with the direction of his thoughts, he looked away. How Magnar longed to tell the lie on the tip of his tongue. The word ached to be released. He turned and stared into her jeweled eyes in an attempt to offer her any hope of what she wanted to hear.

When she placed a hand on his arm, she whispered, “Tell me honestly, Magnar.”

He swallowed and removed her hand from his arm. Placing it securely over his heart, he stated, “Our marriage will be binding in all ways, Elspeth—in name and body. You may worship your God and I shall do so with mine, but ken this, you will be mine completely.” 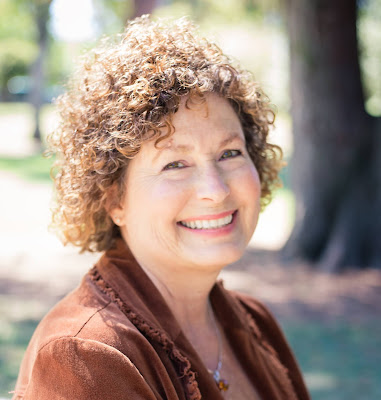 Award-winning Celtic paranormal and fantasy romance author, Mary Morgan resides in Northern California with her own knight in shining armor. However, during her travels to Scotland, England, and Ireland, she left a part of her soul in one of these countries and vows to return.

Mary's passion for books started at an early age along with an overactive imagination. Inspired by her love for history and ancient Celtic mythology, her tales are filled with powerful warriors, brave women, magic, and romance. It wasn't until the closure of Borders Books where Mary worked that she found her true calling by writing romance. Now, the worlds she created in her mind are coming to life within her stories.

If you enjoy history, tortured heroes, and a wee bit of magic, then time-travel within the pages of her books.