Have a sneak-peek between the covers of Fiona Glass's fabulous book — Got Ghosts? #Paranormal @F_Glass_Author 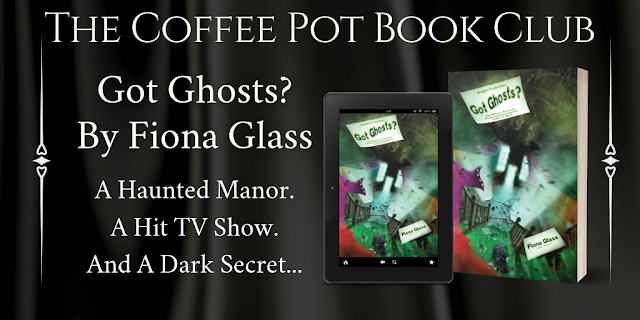 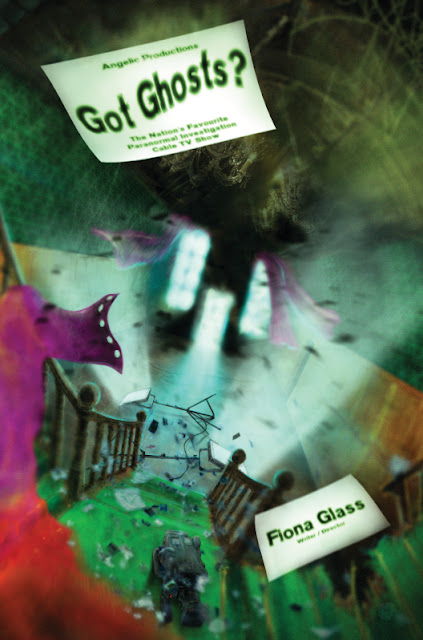 Haunted manor house Greystones Hall is filled to the brim with ghosts.  It’s also falling to bits, and artist owner Emily doesn’t have the money to refurbish the place. When the makers of hit tv show ‘Got Ghosts?’ offer to pay for a weekend’s filming there she jumps at the chance, even though she and her ghostly grandfather Gramps have reservations.

The reservations seem to be misplaced when the film crew swing into action, and producer Carl turns out to be dark, handsome and very available.  But Emily soon starts to have doubts about the methods they use, which Carl won’t discuss. Then the show’s resident medium Stella stirs up a new and malevolent spirit, revealing a dark secret at the heart of the house that has been hidden for centuries.  And when Emily’s own safety is threatened, together with that of her ghosts and her beloved Gramps, will it be Carl who comes to the rescue, or someone much more unexpected?

"Very interesting," said Stella flatly.  "But I think - no ghosts, hmm?"  She turned a broad purple back on them and darted off down a side corridor which Emily knew led only to a couple of the smaller bedrooms and the old servants' staircase.

"I don't think you'll find much..." she began, but like a tug-boat once she'd embarked on something Stella seemed to be hard to stop.  Forced to follow, still bleating about better places to go, Emily felt faintly aggrieved.  Damn it, this was her house.  She should be the one giving them a guided tour, not the other way round.  The faintest whiff of pipe tobacco tickled her nose and she sighed.  Don't worry, Gramps, I'm fine really.  And I thought I told you to behave.

Stella had got ahead of them.  Hurrying to catch up, she found her in the Small Blue Bedroom (so called for obvious reasons), crouched near the fire and tapping the linen-fold panelling with total concentration.  "There is something here.  Something behind this wall.  Listen."  She tapped again, harder, and sure enough the knocking did seem to have a faintly hollow sound.

"I'm not sure...." Emily began, and stopped again, mentally orienting herself to the rest of the house.  They were in the north wing; to the left lay the old chapel and to the right a strange void space, which meant that behind this particular wall was the Tudor magnificence of the Queen's Bedroom.  Perhaps Stella was better at this than she'd thought.  "Oh, you mean the priest's hole," she added.  "It was hacked out of the thickness of the wall beside the chimney breast.  But you can't get into it from here, the entrance is on the other side."

"I think you will find the entrance was here," said Stella with a determined shake of her head which dislodged the daisies again.  "The energy drew me here, to this spot, and I can feel it right through the wall.  Here."  She bounced to her feet, grabbed Emily's hand and placed it where hers had been.  "You feel it too?"

"Um, sorry," said Emily. The faint tingling she could feel was pins and needles from the strength of the grip around her wrist.  "I can't feel a thing."  She regained possession of her hand before she lost all sensation in her fingertips and tried to rub the afflicted area without anyone noticing.

"There is nothing?  Nothing at all?"

"Nope, not a thing.  But you could be right about that entrance.  We've always thought it was odd for a priest to have to run through a lady's bedchamber to reach his hiding place."

"I am always right." Stella rolled her shoulders in a massive shrug, and set off on the hunt again.

Emily and Carl spent the rest of the afternoon trailing after her like dinghies after a barge.  Every now and again they shared a rueful glance, but the longer the trip lasted the more harassed Carl became.  He was juggling the notebook and pencil, his phone, tape measure and a small device that measured the levels of light, and struggling to take readings and measurements and photos and notes all at the same time.  He also appeared to be less than impressed by the rooms they viewed.

At first Emily thought this was just because of the rush, but gradually the man's lack of enthusiasm became too apparent to ignore.  "Am I doing something wrong?  Is the house no good after all?"  Half of her hoped the answer was 'yes', even while the other half was metaphorically reaching for the Angelic Productions cheque.

Emily's money-grubbing half breathed a sigh of relief.

"It's just that everything we've seen so far lacks... atmosphere."

They were in the dining room at the time.  Emily eyed the stained glass windows, vast refectory table and sixteenth-century tapestries on the walls and said, "Oh?"

"I mean, it's all very lovely, but our viewers prefer something less... grand.  Don't you have any dungeons, Miss Price?  The viewers love dungeons, or ruined chapels or dark cellars or attics or... well, anything, really, rather than pretty bedrooms done out in chintz."

"Oh," said Emily again.  "Well, if it's cellars and attics you want...."  Pity you didn't say so when you arrived, she thought, but couldn't bring herself to voice the thought aloud.  Heading out of the dining room agains he wrenched open a small but stubborn door that gave onto a precipitous flight of steps.  "The cellar's this way.  But please be careful - it's very steep and the ceiling's pretty low.  You'd better find something to hang on to."  For one wild moment she wished that something could be her.  Carl was a very handsome man - perhaps more of a yuppie than her usual choice but still attractive enough to send shivers up her spine that had nothing to do with ghosts.  Imagine Carl's fingers curling into her own, or the warmth of Carl's palm on her arm, or better yet an arm around her waist.  In the event, and with her usual luck, it was Stella who clung to her instead.

At the foot of the stairs she paused, shook off Stella's hand as unobtrusively as she could, and switched on the light.  The three stood blinking in the sudden glare like vampires caught out after dawn, and Carl frowned.

"That light's going to have to go.  Cellars should be gloomy and full of cobwebs and shadows, not lit up like my local Sainsbury's."

"Sorry," Emily muttered, kicking the bottom step and unleashing a cloud of dust.  "There's probably a torch around here somewhere."  She was getting rather tired of the constant criticism now.  Visitors to her home were usually exclaiming in delight at the wobbly floors and priceless antiques, not carping about a lack of ambience.  She smelled tobacco smoke again, more strongly than before, and glanced around in surprise.  Gramps never came down here in the normal way of things and she wondered if there was something wrong.  Well, more than usually wrong, she corrected herself, and hid a grin.

Carl was examining an old wine rack with more approval than he'd shown for anything so far.  "This is more like it," he said happily, waving at the brick vaulted ceiling, and set off down a passage to explore.

Emily was glad that something was right at last, but still hung back.  There was an odd atmosphere down here that she'd never noticed in all her trips to re-pressurise the boiler or fetch a bottle of wine.  The scent of pipe smoke was suddenly very strong and she could feel a sense of agitation drumming inside her skull.  The latter, at least, was explained when Stella, still standing far too close, raised a dramatic hand to her brow in a gesture straight from a bad Fifties film.  Emily expected her to say 'Darling, I've just made the most terrible mistake' and was disappointed when all she actually said was, "How peculiar." 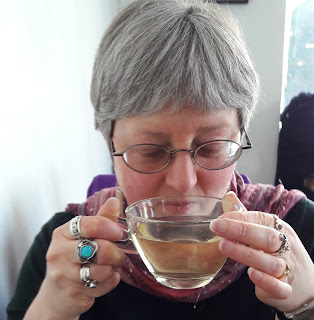 When she isn't being a pane in the glass, Fiona writes darkly humorous paranormal romance, often featuring gay characters and almost always with a twist in the tail. Her short stories have been published in anthologies and magazines including Mslexia, Paragraph Planet, and The Library of Rejected Beauty. She currently has three books available: gay vampire romance 'Echoes of Blood' and gay time-travel romance 'Just Visiting' on Kindle, and paranormal romp 'Got Ghosts?' from Fox Spirit Books.

Fiona lives in a slate cottage within stone-throwing distance (never a good idea in Glass houses...) of England's largest lake with her husband, several pot plants and a vast collection of books. She enjoys history, gardening and photography, and rarely has her nose far from the pages of a book - or a cup of tea.