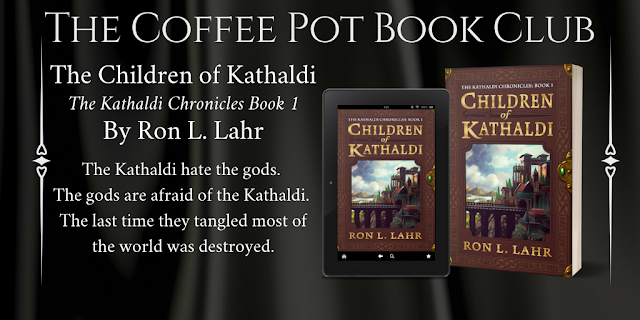 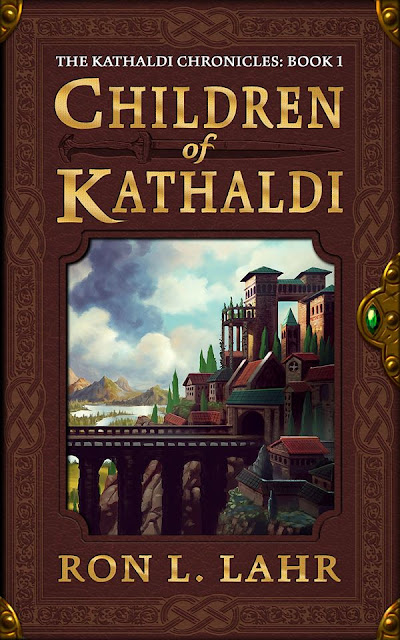 The Kathaldi Chronicles are an epic tale of a long forgotten evil that has returned to conquer the world.

The Kathaldi hate the gods. The gods are afraid of the Kathaldi. The last time they tangled most of the world was destroyed.

The only hope is a small group of friends. Join Dirk as he tells their story. Who is Dirk?

He's a thief. And a scoundrel. Now he needs to help his boyhood friend save the world.

Some wonder why Dirk would help. Look, he’s a jerk, not a monster.

And if the world is destroyed who would Dirk steal from?

Does that make him a hero? Hopefully, the ladies will think so.

There is adventure, heroes aplenty, magic, monsters, evil deeds, and lots of laughs as Dirk tells how he saved the world while his friends were nearby.

Look, I’m not writing this to feed my ego. Or to get free drinks, or have ladies throw themselves at me. I’m sure that will all happen, but it’s not why I am doing this. This is for my children. I want them to know me and what I accomplished. What I was a part of. A big, significant, important, part of.

Unfortunately, I don’t know exactly who my children are but, mathematically, I figure I must have a bunch of them. This way, I don’t have to track them down individually and talk to them face to face. It’s a big time-saver for me. Great idea, right? As you read this you’ll see that I’m kind of an ideas guy.

So, to start off you should know that before the important events in this book took place I had some trouble with the authorities from time to time. I would not exactly say I was a thief, but that’s because thievery has a pretty bad reputation. A lot of other people did describe me that way, and I admit that it was accurate.

But, before I get too far ahead of myself I suppose I should step back a little, just to the beginning. My beginning. I was born. I was named Dirk because my father had to sell his favorite one to pay the midwife when I was born, and he wanted me to remember it. He liked reminding me of what they had to give up for me just to pop out of my mother. They were pleasant like that. "It was a difficult birth," my mother would often say. "And it ain't gotten any easier since!" They would both say that last part together, if they could. It never got old. Seriously. Never. Still funny. It's hard to say who I got my own awesome sense of humor from because they were both so darned hilarious.

At some point my dad left so my mom had to finish raising me and my siblings on her own. It didn’t bother me. And if it did, I am completely over it. It’s not a big deal. The important, relevant, part is that I had a friend. And not just that I had a friend, but who he was.

Thilos. He was an orphan who was being raised by a crippled friend of the family who actually turned out to be a good guy. One of the best. See, not all cripples are awful. Anyway, not your normal, unhappy, sad, orphan story. It’s kind of sweet, really.

Anyway, we met as kids, running around the streets, playing, having fun, and maybe causing a little bit of trouble. He taught me to fight and also how to read. Neither very well, mind you, we both needed other, better, teachers later on. But I might never have learned how to read if my new friend hadn't convinced me how cool it would be. I'm not sure he was right about that, it's never gotten me any women, but I’ll admit that it has been extremely helpful.

The really important and relevant part is that we were still friends when the events in this book began, which is why he looked me up that day when he was in big trouble. By the way, this is not supposed to be some fancy foreshadowing – like we are enemies now, or something - it is just me trying to manage what to say and when to say it in terms of the present and the future. It’s kind of tricky. I don’t want to give things away too soon, or too late, or too never. I’m just a guy, trying to tell an amazing story, while some people judge me for every single fricking thing I do.

I know what you’re thinking – that was a whole chapter? Well, write your own damn book. I am telling this story and the stuff in the first chapter wasn’t really a part of the main story that starts pretty soon here in this chapter, so I decided to make it its own thing and have the actual story start now, in chapter two. Happy? Unhappy? Great, because I don’t care. As far as I know you’re reading this a million years in the future and I’ve been dead for most of that time.

Anyway, one day I was relaxing at home in my place in Ansdron, one of the northern border cities, when there were a series of loud knocks on my door. I answered it carefully, because people can misunderstand things that you do, you know? Judge you for your past actions, I mean. But it was my old friend Thilos, looking out of breath and worried. I invited him in, or at least I started to, but he pushed right past me and quickly closed the door.

“Sorry to be rude, Dirk,” he said as he moved to the window and pulled the curtains closed, “but I’m being followed.”

I quickly slid up to a different window and used the large dagger suddenly in my hand to push just enough of the curtain aside that I could see the normal looking street scene outside as I asked, “Who is following you, Thilos?”

He sighed as he sat down on one of my comfortable, yet tasteful, chairs. “I don’t know if they’re actually following me right now, I think I lost them. But they are definitely after me.”

“Who?” I was getting a little frustrated which usually leads me to single word sentences.

Thilos shrugged with a slight smile. “The Warders.” He sounded a little embarrassed.

At this point I was quite confused. “The King’s Warders? As in Thilos, the King’s Warder?” Thilos had been a King’s Warder for almost seven years. It was all he had ever wanted to do, serve guarding and patrolling the borders, just like his parents and his guardian had done. He had joined as soon as he turned sixteen and qualified. So, saying the Warders were following him was like saying his parents were trying to kill him. Crazy!

He nodded, as if relieved I was following his insane logic. “That’s right!” He looked from side to side, apparently checking for eavesdroppers, inside my home, and lowered his voice to a whisper, “I think they’ve been infiltrated by the Kathaldi.”

Now, you readers already know what happened over the next few years but that’s because you live in whatever is the present for you. I lived in the present for me, which is the past (or even the distant past – I don’t know) for you. Suffice it to say that for me, in the ‘at the time present’, no one had heard of the Kathaldi being alive for centuries. So, this stuff Thilos was saying, even though he is a great guy and my oldest friend, sounded crazy as could be. I looked him over carefully but he didn’t look any different. Same brown hair and eyes. Same healthy looking grey skin. Still wearing the same old grey Warder’s uniform. He looked sane, I guess.

Before I continue with the story I guess I should take into account the fact that the kind of women I am most attracted to aren’t always that smart. So, maybe some of my kids, or grandkids, or their kids, or their spouses, or whoever else is reading this, are some kind of idiots and don’t know who the Kathaldi are, or were, or whatever. So, I’ll tell you, as quickly as possible so we can get back to my story. My awesome, heroic story. Dang, if some of you are really that dumb maybe you didn’t even know about the Kathaldi coming back and I just ruined the book for you. Oh well, you’ll probably forget about it soon. Man, I love dumb people! They make for the perfect audience.

Okay. So, in the olden timey days almost everyone lived quite a ways north of where we live now, and by that, I mean north of Ansdron, which is one of the most northern cities these days. There were supposedly a bunch of islands where everyone lived happy lives, enjoying the sunny beaches. That is, until the Kathaldi, who lived on just one of these islands, started stirring up some stuff.

Born in the San Francisco Bay area but raised in Spokane, Washington, Ron L. Lahr is the author of the new epic fantasy series the Kathaldi Chronicles. He has worked mainly in the IT and ERP software consulting fields and enjoys gardening, cooking and baking from scratch with his amazing wife, working on old cars and spending time with his family, which mainly consists of his wife, children, parents and in-laws, plus of course, all of their pets. He is also a fan of the Gonzaga men's and women's basketball teams and the Seattle Mariners.