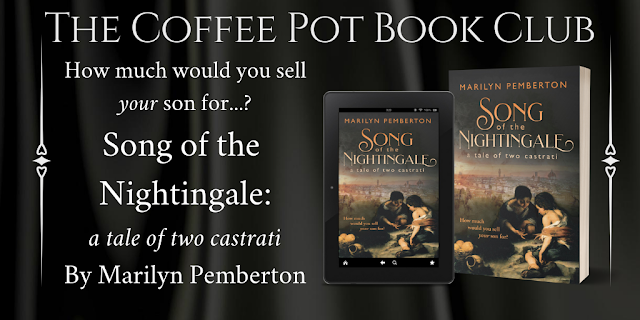 Song of the Nightingale:

a tale of two castrati 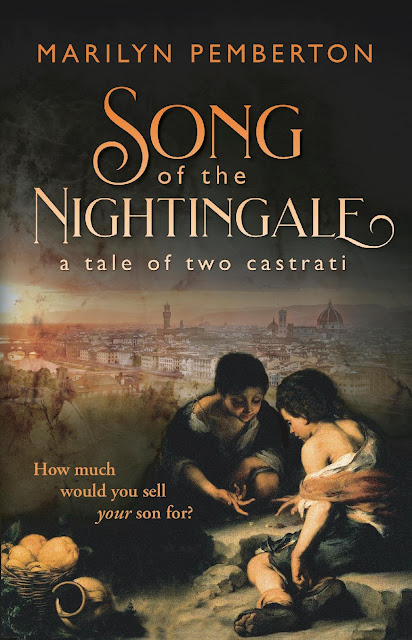 Philippe, the narrator of this tale, is secretary to Count De Lorenzo, and lover to the Count’s young wife. He is tasked with buying young boys from poor villagers, having them castrated and taking them to Florence to be taught to sing as castrati. The parents are told that their sons are especially blessed with their wonderful voices and they do not object to the boys making a physical sacrifice in order to thank and praise the Lord; nor to the bag of gold they are given in exchange.

The boys are innocents, victims of circumstances beyond their control. Surely they can have nothing to do with a barber’s mysterious death, or the suicide of an abusive Jesuit priest?

This is a tale of passion, revenge, guilt, regret, loss and redemption.

Once I had put Luigi back into his bed I lay down on my own. I was exhausted and hoped that sleep would come quickly. I did not drift off to sleep, however, but rather back to the morning that this ill-conceived journey had started.

Davide and I had arrived at Montalcino just as the sun’s nascent rays were casting out the night-time shadows, revealing the rough, ill-repaired dwellings of the families I had come to break up. All the village was awake by now, preparing for another day working in il Conte’s vineyards, but we approached the house from whence came a wave of sound: women sobbing, men remonstrating, children whining, babies wailing. I dismounted and as I walked tentatively towards the house the noise slowly abated into an eerie silence, broken only by the blood pounding in my ears. I couldn’t yet see inside but the house itself seemed to be glaring at me, and having judged me, found me very much wanting.

I hesitated in the doorway. I could now see that the room was packed with people, all of them facing towards me, motionless, as if frozen by a sorcerer’s curse. I searched the faces for one I recognised but in such a close community they all had similar features and I could not distinguish one from another. No-one moved but I felt as if they were all pressing onto my chest, stifling me. I stepped back outside and took a deep breath of the fresh morning air. This seemed to break the spell for everyone surged out and formed a circle around me, their closeness and hostility making me sweat.

I had to take control. ‘Are the boys’ fathers here?’ I was ashamed to realise I didn’t even know their names. There were murmurings and shufflings and eventually five men stepped forward. Not only were their faces akin, so too their expressions of distrust and disdain. I suddenly felt angry at il Conte for putting me in this position, at his arrogance and self-indulgence. My guilt made me harsh. ‘You are here then, to exchange your sons, each for a bag of gold?’

They glanced at each other, then one spoke for them all, his tone defiant. ‘Conte De Lorenzo promised they will have more opportunities and be able to earn good money.’ He hesitated, ‘And the gold will help to repair our houses, buy more stock and better our own lives. God gave our boys their voices and it would be sinful of us to waste that gift.’

I felt embarrassed that they were putting their trust in a man who I knew to be only interested in his own aggrandisement. I could have, should have, tried to dissuade them, but I wanted to keep my job and the security and life-style it gave. ‘As il Conte explained to you, they will spend quite a few years in the conservatoire in Florence, where they will be taught to sing properly. They will certainly be well looked after there and if they work hard and it is God’s will then, yes, they will have a better life and will earn good money.’ More murmurs, shuffles and furtive glances. ‘So, I have five bags of gold here, one for each boy.’ The words tasted foul in my mouth but I swallowed them. I took a leather pouch and poured the coins into my palm, the sunlight glinting off the golden faces. A gasp encircled me and the five men, the five fathers, smiled and nodded. They each held out their hands.

‘The boys first.’ When had I learned to be so callous? The men called into the crowd, which separated as the five mothers led their boys to me. The women’s eyes were red rimmed and as I handed a bag to the father, I had to tear the son from the mother’s grip.

As Davide had driven the carriage out of the village I had looked back. The reflection of the sun off the gold that was already being eagerly counted had blinded me and the screams of the mothers had deafened me. The carriage had lurched round a corner and the huddle of villagers had been lost to sight. But I could still hear the screaming.

I woke with a start, realising I was in fact in my bed and that I could still hear screaming.

It was Fabio. He was sitting bolt upright in his bed, the sheet thrown to the floor. He was staring in horror at his linen binding and he screamed and screamed.

I rushed over to him, sat on the edge of the bed and took his hand in mine.

‘Hush now, Fabio, it’s all right. Everything went well. Are you in any pain? Are you thirsty?’

Fabio looked at me with his black eyes filled with panic. He stopped screaming but then leaned towards me and threw up all over me.

I heard giggling in the doorway. It was Lizzie, holding a jug of water and more squares of linen.

‘Don’t just stand there, come and help me clean this up.’

She may only have been twelve but she was a good and efficient worker. Whilst I changed my clothes she gave Fabio a drink, wiped his face and changed his binding.  He was calmer when I returned to his side and he gave me a sheepish grin.

‘Sorry, signor Agostini. I was dreaming I was in the barn with Roberto. I had forgotten about,’ he pointed down to his middle section ‘about all this. I am alright now. It doesn’t hurt very much. Actually, I am quite hungry.’

It was Roberto, propped up on one elbow, his hair tousled, still stark naked. I smiled at his brazenness. ‘How are you feeling, Roberto?’

‘I wish you would both call me Philippe. Are you hungry too?’

Roberto nodded then gingerly swung his legs over the side of the bed. He tried to stand up but gave a yelp of pain and sat back down again.

Il Barbiere’s wife, Mathilde, stood in the doorway, holding a tray. ‘Don’t go rushing things, young man. Wait a moment and I’ll help you.’ She put the tray onto the table and then went over to Roberto’s bed.  She took hold of his upper arm then lifted him up. ‘Try and stand upright, don’t bend. The pain will pass.’

Roberto stood for a minute, his mouth a thin, determined line, then he gave a stiff nod and, guided by the wife, he walked with small, shuffling steps across to the table.

I similarly supported Fabio, and when he was seated they both fell onto the bread and cheese with great gusto. Whilst Mathilde poured out three cups of milk I went over to Luigi’s bed. I could see immediately that things were not right. He was burning with fever. I wiped the sweat from his face with the red and white spotted neckerchief that he was so proud of, but I made no impression. His eyes were open but unfocussed; he looked through, not at me. He was mumbling the same thing over and over again.

Mama, who had sold him for a bag of gold.

Song of the Nightingale

Add Song of the Nightingale to your ‘to-read’ list on 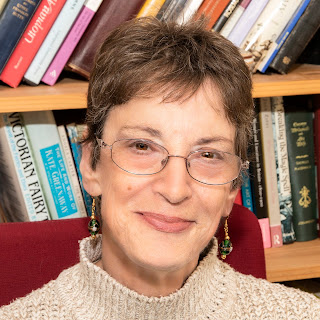 Marilyn Pemberton retired from being a full-time IT Project Manager in October 2019. During research for her PhD, Marilyn “discovered” Mary De Morgan, a Victorian writer. Marilyn wrote Out of the Shadows: The Life and Works of Mary De Morgan, (Cambridge Scholars Publishing, 2012). There were still many gaps in her knowledge and she decided to write a fictional novel based on De Morgan’s life - The Jewel Garden (Williams & Whiting, 2018). This novel was a semi-finalist in the Chanticleer 2019 International Goethe Book Award for post 1750s Historical Fiction.

Marilyn’s second novel, The Song of the Nightingale: a tale of two castrati, (The Conrad Press, 2019), is a historical novel, set in 18th century Italy that tells of two young boys who are bought from their families, castrated and then trained to be singers. It tells of passion, revenge, jealousy, love and redemption. It has just won the Fiction category of the 2020 International Rubery Book Award.

Marilyn is currently working on the second book of a trilogy that will tell of three generations of women who are story-tellers but who face sometimes insurmountable obstacles to getting their her-stories heard.