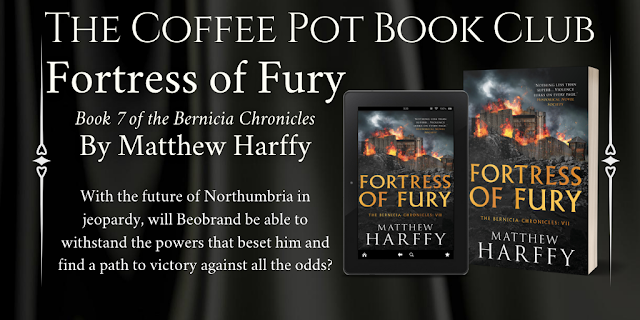 Book 7 of the Bernicia Chronicles 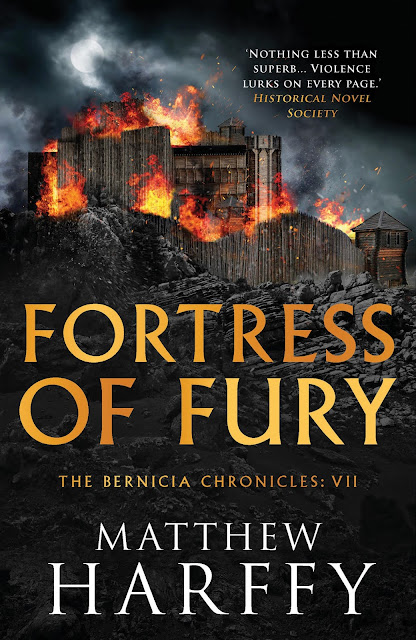 Beobrand is besieged in the action-packed instalment in the Bernicia Chronicles set in AD 647 Anglo-Saxon Britain.

War hangs heavy in the hot summer air as Penda of Mercia and his allies march into the north. Caught unawares, the Bernician forces are besieged within the great fortress of Bebbanburg.

It falls to Beobrand to mount the defence of the stronghold, but even while the battle rages, old and powerful enemies have mobilised against him, seeking vengeance for past events.

As the Mercian forces tighten their grip and unknown killers close in, Beobrand finds himself in a struggle with conflicting oaths and the dreadful pull of a forbidden love that threatens to destroy everything he holds dear.

With the future of Northumbria in jeopardy, will Beobrand be able to withstand the powers that beset him and find a path to victory against all the odds?

Beobrand was yet some way from his destination, but he halted his progress, holding himself still and silent in the darkness. His hand fell to the antler hilt of the seax that hung sheathed from his belt. Perhaps Coenred had been right. Maybe he should not have ventured out alone into the cool night-time shadows of the muddy streets of the walled settlement.

But surely he was safe here, in the heart of Deira’s capital. He listened for a long while, feeling foolish for his nervousness. Curse Coenred and his anxiety. The young monk had sown the seeds of fear in his mind and now every shadow held an imagined lurking danger.

A baby wailed, the sound thin and plaintive in the distance. All else was silent. The night was dry and, looking up, there were no clouds to cover the sharp, cold light of the stars and the curved bright blade of the rising moon.

Shaking his head at his own temerity, he pressed on. Much had changed in Eoferwic these last years, with new buildings being erected and old Roman ruins being repaired and returned to some semblance of their former glory. Some of the houses he passed were unfamiliar to him, but he knew the way well enough.

He would be at the church soon, and his heart quickened at the prospect of being alone with her, even if just for a few moments. Ever since that evening the week before he had scarcely been able to think of anything else. Her soft hair and the pliant lips that had brushed his filled his mind, blurring the rest of his thoughts behind the heat and brilliance of their memory.

When the message had arrived earlier that evening, Beobrand had struggled to appear uninterested. The missive had been brought by a hooded man, who slipped back into the darkness as soon as he handed the scrip of velum to Attor who was guarding the door. The wiry warrior had brought the note to Beobrand. They had peered at the scratchings on the stretched calfskin by the light of the candles in the hall, but neither Beobrand nor any of his gesithas knew how to read the markings that were usually penned by monks and priests. So he had sent for Coenred, who had been able to decipher the meaning of the words easily.

“It is Latin,” he had said, running his finger over the smooth sheet of vellum. “The writing is clear, the letters well-formed.”

Beobrand had not wished to know the quality of the penmanship. He had already decided who must have sent the message. She knew how to write and would have surmised he would turn to Coenred to explain the note’s meaning. And they both knew that Coenred would keep their secret; that he would be discreet.

Beobrand still harboured a simmering rage at Coenred for stumbling upon them the week before. He felt his face grow hot at the memory. Who knew what that night might have held in store if the young monk had not blundered into that quiet corner of the newly built monastery at Hereteu? But in helping them meet secretly this night, Coenred could redeem himself. After all, it had been an accident back in Hereteu, happenstance that had seen them interrupted by the monk after the briefest embrace.

“What does the message say?” Beobrand had asked, his words coming breathlessly, such was his excitement. He could hardly believe how she made him feel. He was as giddy as a child thinking of her. He had pushed thoughts of her deep down within himself for a long time. Years. But all of his passion and longing had resurfaced, the flames of his desire rekindled by the merest brush of her lips and a warm whisper in his ear.

Coenred had looked at him, a strange expression on his slender face. His delicate fingers had stroked the vellum, flattening it unconsciously as he stared at Beobrand.

Joy had flooded through Beobrand. It was already dark and the moon would be up soon. He’d turned to leave, but Coenred had pulled him back, his slender fingers tugging at the woollen sleeve of his kirtle.

“Beo,” he’d whispered urgently, “do not do this thing. Think of the kingdom if nothing else. Even if you care nought for your own life, think of her. Think of her son… The king’s wrath will destroy you, should he find out what is between you.”

The young monk had been pale in the flickering light of the candles, his eyes glistening. Beobrand had shrugged off his grip and wheeled on him, anger rising. What did Coenred know of how he felt? It had been so many years since he had dared to feel anything like this. A small voice whispered within him that this was madness, that his friend was right. But Beobrand would not listen. He could not forget the scent of her, the lingering touch of her lips. He would not ignore the chance to be alone with her now.

“But nobody else knows of this apart from you,” he’d said, his voice a harsh whisper, as threatening as a blade being rasped over a whetstone. “So the king will not find out. Will he?” He’d fixed Coenred with a baleful glower. “Or are you planning on telling him?”

He was almost at the church now. The newly built stone structure was surrounded by open ground. He would be able to see its bulk when he rounded the next corner, but again, something made him hesitate. He stopped once more, breathing silently through his mouth. There was no sound. No wind stirred. The distant infant’s crying had ceased. So what caused his neck to prickle so? Could Coenred have been right? He had urged Beobrand not to go, or at least to take some of his men with him. “It could be a trap,” he’d said.

Beobrand had dismissed the younger man’s fears. Who else would have written the message to him, if not her? Few people could write and who, save for her, would believe that he would be able to find someone to read such a message?

And yet, like an animal sensing unseen hunters, Beobrand’s muscles tensed and bunched, ready for action. He was not so blinded by his lust that he could ignore his instincts; they had kept him alive for too long. He sniffed the air, but could smell nothing save the shit-stink of the mud-slicked streets. Cautiously now, he edged his way forward, keeping his left side close to the wall of the building he was passing.

He paused and listened.

Was that the whisper of a voice ahead? He could not be certain. Fingers of dread scratched down his back and he suppressed a shiver. He was sure of it now, there was danger out there in the darkness.

Silently, he slid his seax from its sheath, wishing now that he had listened to Coenred. He had slipped out alone from the hall where they were staying. Cynan, the tall, trusted Waelisc gesith, had questioned where he was going, rising to his feet as if to follow, but Beobrand had waved him away.

“Can’t a man piss in peace?” he’d answered and vanished into the night.

Gods, he was a fool. Alone and with nothing more than a seax to defend him should it come to a fight. Still, he was a match for any man who was stupid enough to attempt to steal his purse. Taking a deep breath, he stepped out from the shadows between the buildings and into the open area before the church. The moon had risen above the shingled roof and the night seemed almost bright after the deep shadows of the sheltered streets.

Beobrand swept his gaze around the cleared ground. The entrances to streets yawned black as raven’s beaks. Nothing moved. He could see no sign of her, or anyone else, near the church. How had he been so foolish? To think she would have come alone, into the dark streets of Eoferwic. He should turn away now, head back to the warmth of the hall and the camaraderie of his men. But instead, he stepped into the silvered moonlight, making his way towards the church. If there was even the slightest chance she might be there, he could not leave.

He sighed resignedly when the men stepped out from the shadowed lee of the building. He was unsurprised, though he knew not who they were. Still, he had many enemies and he should have known better than to trust that his wyrd would allow him to find happiness in a secret nocturnal tryst. Cursing himself silently for a fool, he rolled his head, loosening the neck muscles. A pitiful sense of disappointment washed over him, but as quickly as it came, it was smothered by a searing fury. He had come here seeking a love he knew was forbidden to him, a connection he had only dreamt of, but now he faced unnamed assailants in the night. Death and blood were all he would find here.

Catch up with the rest of the series for FREE with #KindleUnlimited Subscription. 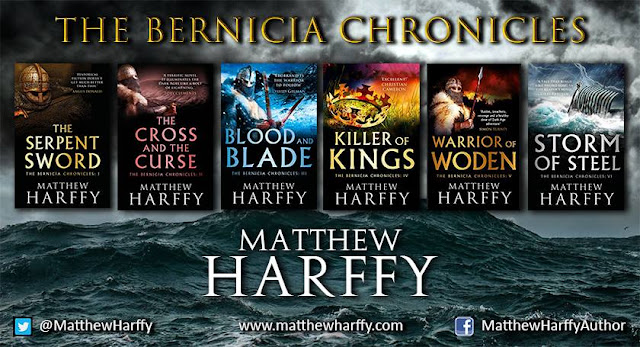 The Cross and the Curse (The Bernicia Chronicles Book 2)

Add The Bernicia Chronicles to your ‘to-read’ list on

Other books by Matthew Harffy

A Time For Swords 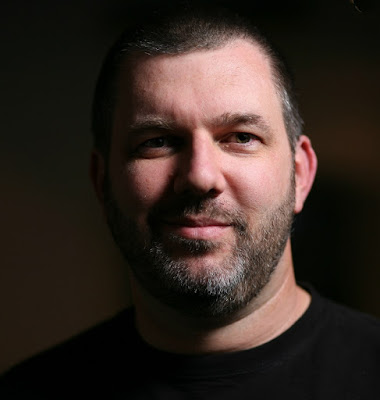 Matthew Harffy lived in Northumberland as a child and the area had a great impact on him. The rugged terrain, ruined castles and rocky coastline made it easy to imagine the past. Decades later, a documentary about Northumbria's Golden Age sowed the kernel of an idea for a series of historical fiction novels. The first of them is the action-packed tale of vengeance and coming of age, THE SERPENT SWORD.

Matthew has worked in the IT industry, where he spent all day writing and editing, just not the words that most interested him. Prior to that he worked in Spain as an English teacher and translator. Matthew lives in Wiltshire, England, with his wife and their two daughters.