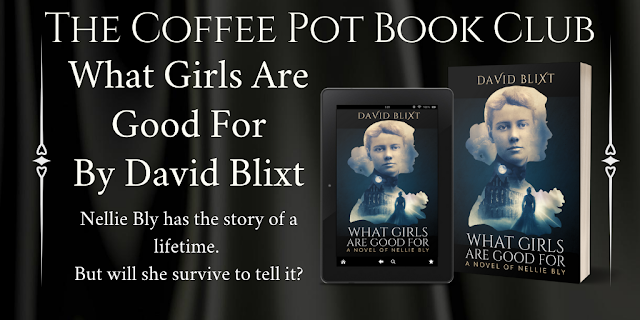 What Girls Are Good For 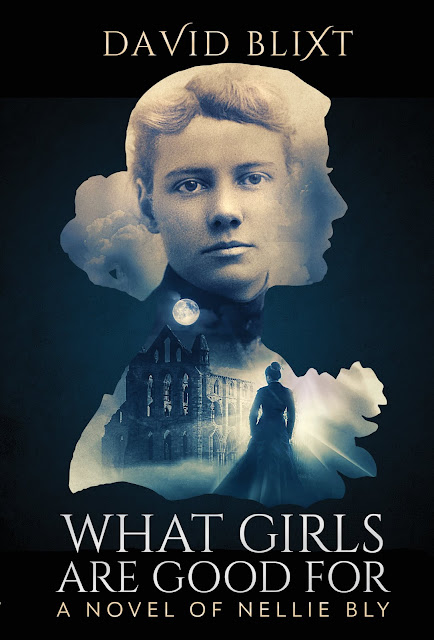 Nellie Bly has the story of a lifetime. But will she survive to tell it?

Enraged by an article entitled ‘What Girls Are Good For’, Elizabeth Cochrane pens an angry letter to the Pittsburgh Dispatch, never for a second imagining a Victorian newspaper would hire a woman reporter. Taking the name Nellie Bly, she struggles against the male-dominated industry, reporting stories no one else will—the stories of downtrodden women.

Chased out of Mexico for revealing government corruption, her romantic advances rejected by a married colleague, Bly earns the chance to break into the New York’s Newspaper Row if she can nab a major scoop – life inside a madhouse. Feigning madness, she dupes the court into committing her to the Insane Asylum on Blackwell’s Island.

But matters are far worse than she ever dreamed. Stripped, drugged, beaten, she must endure a week of terror, reliving the darkest days of her childhood, in order to escape and tell the world her story. Only, at the end of the week, no rescue comes, and she fears she may be trapped forever. . .

Based on the real-life events of Nellie Bly’s life and reporting, What Girls Are Good For is a tale of rage, determination, and triumph—all in the frame of a tiny Pennsylvania spitfire who refused to let the world tell her how to live her life, and changed the world instead.

From Chapter Forty-Four of What Girls Are Good For.

Feigning madness, Nellie Bly has gotten herself committed to the Insane Asylum on Blackwell’s Island. After being interviewed by reporters fascinated by “Nellie Brown,” Bly is left alone with the sole kind physician on the island, Dr. Frank Ingram.

“Dr. Ingram. May I ask you a personal question?”

“You may ask,” he said with a wary smile. “I’ll not promise to answer.”

“It is very impertinent,” I said. “You may re-evaluate my sanity.”

I looked at him gravely. “What does the H stand for?”

He blinked. “Excuse me?”

“Dr. Frank H. Ingram. What does the H stand for? Several of the girls are wondering, and they’ve taken to making wagers. Hamish is the favorite contender, but also Harrison, Horatio, Horace, and Homer.”

“Quite a fanciful list!” said Dr. Ingram, laughing. “I’m afraid it’s nothing so bold. In fact, I now hesitate to tell you. It will seem far too prosaic.”

“Then I think you’d better tell me at once, don’t you?”

He laughed, a real laugh, as one caught off guard. “Harold. Frank Harold Ingram.”

I nodded. “And did you always want to be a doctor?”

He puzzled for a bit. “I’m not sure I thought about it in those terms. My father was a banker, and expected me to follow in his footsteps. But when he died, the doctors were all helpless. I suppose I wanted to understand what they could not.”

“So you came to New York to study medicine. When was that?”

“About ten years ago.” Meaning he was about twenty-six or twenty-seven.

“What led you to mental disorders?”

“Is this your revenge? Is it my turn to be interrogated?” I employed the reporter’s trick of waiting, and at last he answered. “It is a field open to interpretation, and of sudden interest. If we are to understand people’s actions, we must understand their motives. Motive matters, Miss Brown. Motive is the key to understanding, and understanding is the key to empathy. We have so little understanding for our fellow man. So many cannot comprehend a problem unless they have themselves lived it. And people alienated from themselves are the most lost, and most in need of understanding.”

“Do you know the poet Joaquin Miller?” I asked.

“There is a line from one of his poems.” And I quoted:

In men whom men condemn as ill

I find so much of goodness still.

In men whom men pronounce divine

I find so much of sin and blot

I do not dare to draw a line

Between the two, where God has not.

The doctor had begun rearranging the chairs, returning them to their places. “I wish I knew more of poetry. So much truth in so few words.” He paused, a wistful smile on his face. “I had a professor at Bellevue who said what seemed to me to be the wisest proverb I shall ever hear. ‘It doesn’t matter what you choose to learn, so long as you learn to learn deeply.’ That, to me, is key. Once you have learned how to explore a subject, wring from it every ounce of meaning, you can then attack any subject with the same ferocity. It strikes me now that the same applies to empathy. Once you have learned to have compassion for one group of people, it is hard not to have equal sympathy for another group. Compassion is a bucket above a bottomless well. We can always find more, if we so choose. It only goes dry if we choose not to lower the bucket.”

“So you believe lack of compassion is a choice?”

“Not necessarily,” he said, lowering himself into a chair, properly distant from mine. “Not always. At first it is ignorance. An inability to look beyond one’s self. But from the moment that bucket is first dipped, from that time on, it is a choice. Once a soul has learned to have compassion for one downtrodden soul, it must be an active decision not to have compassion for another. Learning cannot be unlearned. It can only be ignored.”

“What allows people to ignore their compassion?”

“When they fear compassion will prove costly. Which it never is. Compassion is the best of humanity. It is the backbone of all good religion, and all good medicine. People turn their back on compassion when they feel they are losing control. So they label others not worthy of their compassion. Negroes. Immigrants. Women. The bankrupt. The diseased. People who are—”

“I will tell you a secret, Doctor Ingram. Most of the women here are no less sane than you or I. Very few are a danger to themselves or to others. But here they are, because there is no other place for them. They are not mad. They are inconvenient.”

“You think not? I have been told often enough in my life that I am crazy. Crazy for not wanting to marry. For not wanting children. For wanting to work. For not wanting what I was supposed to want, and for wanting things denied to me. I was called crazy for being troublesome, loud, inquisitive—inconvenient.” I waved a hand to the walls around us. “That’s what all these women have in common. They are inconvenient. To their husbands, their children, their relations, their community. To society. They are inconvenient, and too poor to pay for that inconvenience. I doubt you have any rich ladies here on the island.”

“Madness in the rich is eccentricity. They can afford to be inconvenient. Think of that word, convenient. I find it insidious.”

“What does it mean to you?”

He rallied gamely. “I suppose it means easy. Comfortable. At hand. Something that requires no effort. A thing to make life easier.”

“That’s what the world wants women to be. A convenience. A balm to their hurts, a comfort to their nights, a grease to the tracks of their lives. Any woman who is not one of those things is damned as being mad. Crazed. Hysterical. Insane.”

I fell silent, and Dr. Ingram stared as if trying to peer inside my head. “I confess, Nellie Brown, your case confounds me. You seem so very lucid, I wonder you are in here at all. I have no doubt that you have a hopeful future before you once you are released.”

“I fear that will never come so long as I am on Hall Six. The nurses there are wickedly cruel.” I recounted the worst offenses I had seen Miss Grady and Miss Grupe perform.

After two minutes Dr. Ingram held up a hand. “I know sometimes women have a difficult time getting along. It’s just something in your nature.”

“There it is!” I cried, rolling my eyes. “You refuse to believe what I say, because it would be inconvenient. It would disorder your world. Whereas if a man was beaten, choked, doused with ice water, he would be believed. You say a lack of empathy is a choice? What are you choosing right now, doctor?”

That brought him up short. For a moment he worried his lower lip. Then he said, “What if I were to transfer you to a quieter ward?”

“And Miss Neville and Miss Mayard, if you please. All three of us.”

“I’ll do what I can. Miss Mayard may be too ill. You said she had a fit this morning? She might be better off where she is.”

What Girls Are Good For 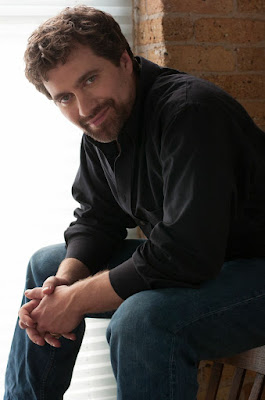 David Blixt's work is consistently described as "intricate," "taut," and "breathtaking." A writer of Historical Fiction, his novels span the Roman Empire (the COLOSSUS series, his play EVE OF IDES) to early Renaissance Italy (the STAR-CROSS'D series) through the Elizabethan era (his delightful espionage comedy HER MAJESTY'S WILL) to his Victorian age series following daredevil journalist Nellie Bly. His novels combine a love of the theatre with a deep respect for the quirks and passions of history. As the Historical Novel Society said, "Be prepared to burn the midnight oil. It's well worth it."

When not stuck home in a pandemic, David continues to write, act, and travel. He has ridden camels around the pyramids at Giza, been thrown out of the Vatican, been blessed by a pope, scaled the Roman ramp at Masada, crashed a hot-air balloon, leapt from cliffs on small Greek islands, dined with Counts and criminals, climbed to the top of Mount Sinai, and sat in the Prince's chair in Verona's palace. Yet David is happiest at his desk, weaving tales of brilliant people in dire and dramatic straits.

Living in Chicago with his wife and two children, David describes himself as "actor, author, father, husband. In reverse order."