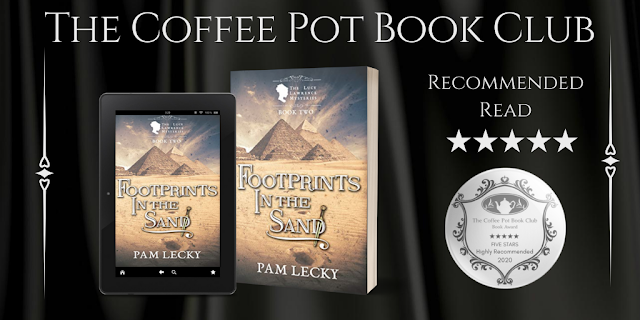 Footprints in the Sand 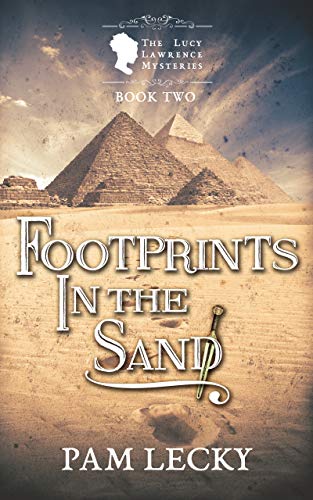 A melting pot of jealousy, lust and revenge. Who will pay the ultimate price?

Lucy Lawrence throws caution to the wind and embarks on a journey of self-discovery to the land of the pharaohs.

Travelling to Cairo as the patron of the charming French Egyptologist, Armand Moreau, Lucy discovers an archaeological community plagued by professional rivalries and intrigue. It is soon apparent that the thriving black market in antiquities threatens Egypt’s precious heritage.

When the Egyptian Museum is burgled, Lucy is determined to solve the case, much to the annoyance of the local inspector of police, and the alarm of Mary, her maid. But when an archaeologist is found murdered in the Great Pyramid, Lucy is catapulted into the resulting maelstrom. Can she keep her wits about her to avoid meeting a similar fate?

“As a patron you could be one of the first to enter a tomb last sealed thousands of years ago. The first to see a pharaoh’s treasures. Perhaps hold in your hand a sacred scarab revealed in the wrappings of a mummy.”

It sounded so exciting, so glamourous. How could she possibly refuse? And besides, French Egyptologist, Armand Moreau, could be very persuasive, and Lucy Lawrence had always been fascinated with history and archaeology. To go to Egypt, to be a part of an archaeological dig was a childhood dream. This was her one chance to make that dream come true.

Despite her maid’s misgivings, Lucy sets off on an adventure of a lifetime. But an archaeological dig is not as romantic as Moreau had made it out to be. Underneath the Egyptian sun, Lucy finds herself in the middle of an archaeological feud between Moreau and his English rival, Reginald Whitmore. To make matters worse, someone is stealing artefacts from the dig and selling them on the black market.

Surrounded by rogues and charlatans, Lucy is determined to embrace every single second of this foreign yet fascinating world. Unbeknownst to Lucy, however, there is more than professional rivalry and reputation at stake. Someone is out for revenge, and they will not be content until they have it…

With flawless attention to the period that this book is set in along with a propulsive plot that grabs the reader from the opening sentence and takes them forever onward to its dramatic climax, Footprints in the Sand (The Lucy Lawrence Mysteries Book 2) by Pam Lecky is an example of Historical Fiction at its very best.

Having read and thoroughly enjoyed the first book in this series, No Stone Unturned, I was really looking forward to reading the second book in The Lucy Lawrence Mysteries Series. I was anticipating a wonderful read, but Lecky has exceeded all of my expectations. From a perfectly respectable hotel in Nice, France, to the majestic beauty of the pyramids at Giza, Lecky has presented her readers with a novel that is as enthralling as it is addictive — I simply could not put it down. The adventure, the sense of time and place, along with the gripping narrative, enthralled me from the opening sentence to the very last full-stop. This is the kind of book that keeps giving—a real treat for lovers of quality Historical Thrillers.

Unlike most Historical Thrillers, the protagonist in this series is a woman — and how refreshing that is! Lucy is a rather meddlesome woman who always wants to be in the thick of the action, which leads to some rather unfortunate and dangerous incidents. Despite the fragility of her sex, the era the book is set in, and the perils that she faces, Lucy strives ever onwards to discover the truth and to unearth the villains. At times, this puts her at odds with the police, who would rather she left the detective work to them. But even poor Inspector Vauquelin realises that he cannot keep the redoubtable Madame Lawrence, from poking her nose into business that she has no right to pry into! However, I think her inability to leave something alone, makes her incredibly appealing to the reader.

There is an amazing cast of colourful characters in this book, and Lecky ensures that her readers care about them all – even those whose actions are delightfully suspicious. One of my favourite secondary characters is Lucy’s disgruntled maid, Mary. Mary is dragged from pillar to post by the whims of her mistress, and she makes it quite clear she is not happy about it. I thought Mary's depiction was fabulous – and her reaction to Egypt and the pyramids could not have been more different than Lucy’s! Through Mary, Lecky also demonstrates the class structure of the 19th Century. Lucy does not take into consideration Mary’s wishes at all, despite Mary’s obvious distaste for Egypt and her desperate desire to go home. At times this made Lucy appear incredibly self-centred in her approach to her maid, which I thought was very telling of the time. However, despite this, Mary is unfailingly loyal. When Lucy’s world is turned upside down, Mary is the one constant, and for that reason, I adored her.

Another character that caught my eye was the charismatic Frenchman, Armand Moreau. Moreau could charm the birds out of the tree if he had a mind to. He is one of those people who somehow makes the day seem brighter just by being alive, and for that reason, women hold him in high esteem — at least they do when they first meet him. But despite the broken hearts he leaves behind, he is married to his job. His passion, his excitement, is contagious and it was very easy to understand why Lucy became so enthralled with his project. However, as is often the case, Moreau has secrets, and as Lucy slowly discovers these secrets, she has to ask herself if she ever really knew him at all. Moreau was a character that drove this story forward. I thought his depiction was brilliant.

There are several antagonists in this book, but like all good thrillers, they are not always obvious. When I thought I had figured out who the antagonists were, Lecky would pull me up short, with a fabulous plot twist – this is a novel that kept me guessing right up until that final moment.

As I have already touched upon, the historical backdrop of this book is wonderfully portrayed. Lecky’s knowledge of not only the late 19th Century but also the history of ancient Egypt shines through in every single page. I really did feel like I had fallen through time and found myself in the 19th Century. Luckily, I had a very competent tour guide in Lecky.

Footprints in the Sand (The Lucy Lawrence Mysteries Book 2) by Pam Lecky is a dazzling book that is not only an immensely pleasurable one to read but the ending is also extremely satisfying. I truly hope there are more books to come in this beguiling series.

Footsteps in the Sand

Add Footsteps in the Sand to your ‘to-read’ list on 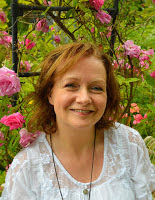 Pam Lecky is an Irish historical fiction author, writing crime, mystery, romance and the supernatural. Pam is represented by the Hardman & Swainson Literary Agency in London. She is a member of the Historical Novel Society and the Society of Authors and has a particular love of the late Victorian era/early 20th Century.

Her debut novel, The Bowes Inheritance, was awarded the B.R.A.G Medallion; shortlisted for the Carousel Aware Prize 2016; and long-listed for the Historical Novel Society 2016 Indie Award.

Her short stories are available in an anthology, entitled Past Imperfect, which was published in April 2018.

June 2019, will see the release of the first book in the Lucy Lawrence Mystery series, No Stone Unturned, a fast-paced Victorian mystery/crime, set in London and Yorkshire. The sequel, Footprints in the Sand will be released later this year.