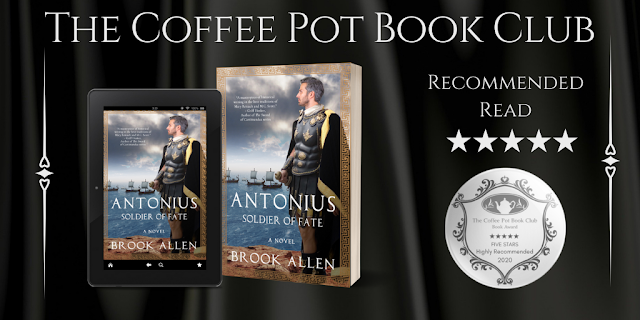 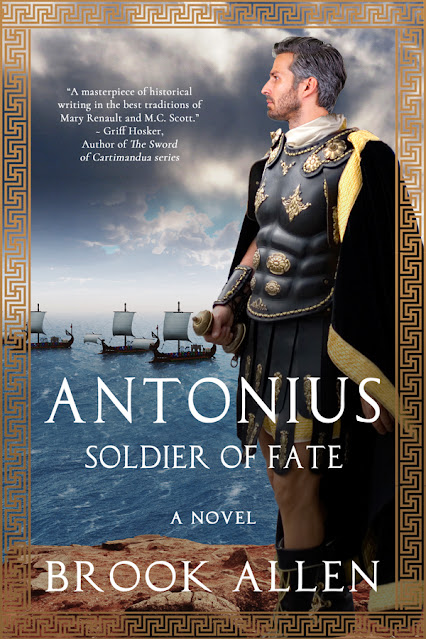 Marcus Antonius has it all—power, prestige, and a heroic military reputation among his countrymen. But as master of Rome’s eastern provinces and kingdoms, he must maintain peace, and in so doing, sacrifices his own happiness, yoked within a loveless marriage and an eroding alliance. As his colleague Octavian’s star rises, Marcus must compete with his rival’s success, though it leads to an embittered struggle threatening to end their unity.

Once Marcus finally takes matters into his own hands, his fate becomes tied to the east—far from Rome and his seat of power, to a horrific campaign that will forever alter him, and to the love of Egypt’s Queen. He is a man torn between two countries and two families, and ultimately—a soldier fated to be the catalyst transforming Rome from Republic to Empire. 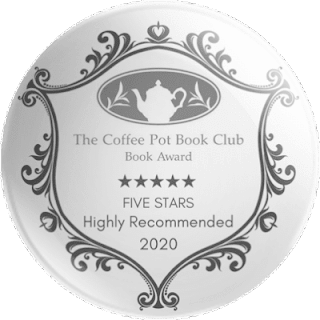 “Truth is always so enlightening…”

Caesar is dead, as are those responsible for his murder. After over 100 years of conflict, what the Empire needed now more than ever was stability and peace. However, even in death Caesar still had the power to divide and, it seemed, to conquer.

They may have been drifting apart, but to name Octavian as his heir, to dismiss his own son made no sense to Marcus Antonius.

Octavian may well be good with words, but he is an arrogant man. To make matters worse, Octavian leads from behind his army. The Empire needs a strong leader, a warrior. It does not need a conceited boy. It needs Antonius.

However, Antonius has many enemies, and he keeps making more. Whereas Octavian has the privilege of being Caesar’s adopted son and named heir. He also knows what to say and when to say it. If Antonius is not careful, Octavian could make a formidable enemy.

If he is to survive, then Antonius must be prepared to compromise with Octavian. If Antonius could control the Eastern Empire, then that would be enough, for now, as long as Octavian treated him and his men with the respect they deserved.

However, Octavian is a fickle ally, and he has ambitions of his own…

From a savage execution to the defamation of a once-celebrated war hero, Antonius: Soldier of Fate (Antonius Trilogy, Book #3) is the enthralling story of Marcus Antonius’ dramatic fall from grace.

The victors write history, and they take pride in assassinating the characters of their enemies — for thousands of years, we have believed Octavian’s propaganda. Marcus Antonius, a man who was bewitched by an Egyptian Queen, a man who turned his back on Rome for the pleasures that the flesh offered, and then killed himself when he realised he was defeated. A dishonourable end for a dishonourable man. But what if we looked past the defamation, what if we sought the real Marcus Antonius? I have often wondered what we would find. Would we discover a disgraceful, disreputable man, or one who had been grievously wronged?

At last, there is a Historical Fiction series that explores in-depth the life of Marcus Antonius. In her fabulous trilogy, Allen has looked past the twisted truth that suited a political agenda and has depicted an Antonius that was a courageous man, a loyal friend, and a worthy enemy. Soldier of Fate (Antonius Trilogy, Book #3) is a heart-wrenchingly gripping read about the final years of Marcus Antonius’ life.

Having read the first two books in this beguiling trilogy, I found myself both looking forward to and dreading the final instalment — anyone familiar with Roman history will already know how this story is going to end. Therefore, how refreshing it was to read this sorry tale from Antonius’ perspective — without the persuasive narrative of a man who was destined to become the first Roman Emperor. Forget everything you think you know about Antonius and be prepared for a harrowing, tear-jerking story of love, hate and a desperate betrayal.

With a crimson-bordered senatorial toga, that warns of a desperate foreshadowing of the blood that will be spilt, comes a novel that is as rich in historical detail as it is in story. Wanting to replicate Alexander the Great’s success, Antonius set himself upon a path that would end, much like Alexander’s did, with his untimely death. Allen has explored the latter years of Antonius’ life with a historian’s knowledge and a novelist’s intuition for what makes a captivating read.

Allen’s Antonius is a man who has triumphed over adversity, who started with nothing and who became so tantalisingly close to having everything he wanted. Allen has given her readers a protagonist who wants to do the right thing, not only for himself and his family but for the Empire. He is also a man who is very ambitious and isn’t afraid to stand up to other powerful men.

His relationship with Octavian, in this book, is one of mutual loathing, but unlike Octavian, Antonius is a man who sometimes acts before he speaks, and he is quick to accuse Octavian for things of which he has no actual hard evidence, which makes him seem irrational and dangerous to those whom he opposes. Octavian is a very clever, very shrewd man who can politically outmanoeuvre Antonius and force him to do things that he does not want to. However, when Antonius feels free from Octavian’s reach, he becomes complacent, almost arrogant in his assumptions that the East is his and he can rule it as he sees fit. He allows his influence in Rome to wane which, as Allen so clearly demonstrates with her wonderfully lyrical prose, is political suicide. I was fascinated with how the relationship between Antonius and Octavian was portrayed in this book. Octavian is a cruel man, but everything he does, he does for a reason — for a political agenda and his own unquenchable ambition.

In contrast, Antonius wants peace, and he is determined to achieve it. But Antonius is a man that stumbles and, despite his outward appearance of control, he does have a tendency to overthink and to judge himself most harshly for things that were beyond his control — saying that however, he is no innocent victim. Sometimes, he behaves disgracefully, which I thought made him all the more real in the telling. Allen’s, Antonius is a deeply flawed man, but that is what makes him so very appealing to the reader. I thought Antonius’ depiction throughout this series was absolutely sublime, and I applaud Allen for having the courage to write a candid account of this remarkable man’s life.

When one thinks of Antonius, then one cannot help but also think of the beautiful Egyptian Queen who was destined to be his downfall. In this novel, Cleopatra is no whore who Antonius sacrificed everything for. She is not a wanton seductress who lures the innocent Roman towards a dishonourable death – although there is something of the forbidden about her, which makes her incredibly appealing to Antonius. Instead, Allen has given her readers a Cleopatra who is an astute politician, a compassionate ruler, when compassion allows, a mother, and a woman who is, for the first time in her life, deeply in love. The political obstacles that Cleopatra has to overcome to maintain control of the throne, makes her at times seem rather cold towards those who have evoked her anger, and she is, therefore, a sharp contrast to Antonius, who is very reluctant to take another’s life without cause. However, Allen has demonstrated the challenges that Cleopatra faced with a sensitivity to the history of the time. In a world dominated by men, Cleopatra spat in the face of their masculinity, because she was a competent ruler, who put her country first, and was determined to leave a different legacy for her children compared to the one that she had been left with. Her relationship with Antonius in this novel is one of mutual respect and a deep, pure love. I thought Allen’s depiction of Cleopatra was fabulous.

Antonius: Soldier of Fate (Antonius Trilogy, Book #3) by Brook Allen is a work of extraordinary scholarship and one that once started is impossible to turn away from. It is a traumatic tale, yet somehow it is a beautiful one at the same time. If nothing else, this book shines a light on a man and a woman who have been cast as villains for far too long. 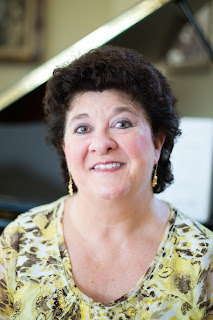 Author Brook Allen has a passion for ancient history—especially 1st century BC Rome. Her current work is a trilogy on the life of Marcus Antonius—Marc Antony, which she has worked on for the past fifteen years. The first installment, Antonius: Son of Rome was published in March 2019. It follows Antony as a young man, from the age of eleven, when his father died in disgrace, until he’s twenty-seven and meets Cleopatra for the first time. Brook’s second book is Antonius: Second in Command, dealing with the Antony’s tumultuous rise to power at Caesar’s side and culminating with the civil war against Brutus and Cassius. Antonius: Soldier of Fate is the last book in the trilogy, spotlighting the romance between Antonius and Cleopatra and the historic war with Octavian Caesar.

In researching the Antonius Trilogy, Brook’s travels have led her to Italy, Egypt, Greece, and even Turkey to explore places where Antony once lived, fought, and eventually died. While researching abroad, she consulted with scholars and archaeologists well-versed in Hellenistic and Roman history, specifically pinpointing the late Republican Period in Rome. Brook belongs to the Historical Novel Society and attends conferences as often as possible to study craft and meet fellow authors. In 2019, Son of Rome won the Coffee Pot Book Club Book of the Year Award. In 2020, she was honored with a silver medal in the international Reader’s Favorite Book Reviewers Competition.

Though she graduated from Asbury University with a B.A. in Music Education, Brook has always loved writing. She completed a Masters program at Hollins University with an emphasis in Ancient Roman studies, which helped prepare her for authoring her present works. Brook teaches full-time as a Music Educator and works in a rural public-school district near Roanoke, Virginia. Her personal interests include travel, cycling, hiking in the woods, reading, and spending downtime with her husband and two amazing Labrador Retrievers. She lives in the heart of southwest Virginia in the scenic Blue Ridge Mountains.