Join author, Clive Mantle, as he looks back on his most resent research for his fabulous #NewRelease - In the City of Fortune and Flames (A Freddie Malone Adventure) #YA #TimeTravel @MantleClive 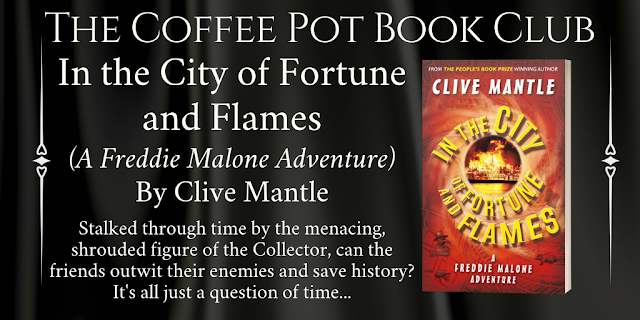 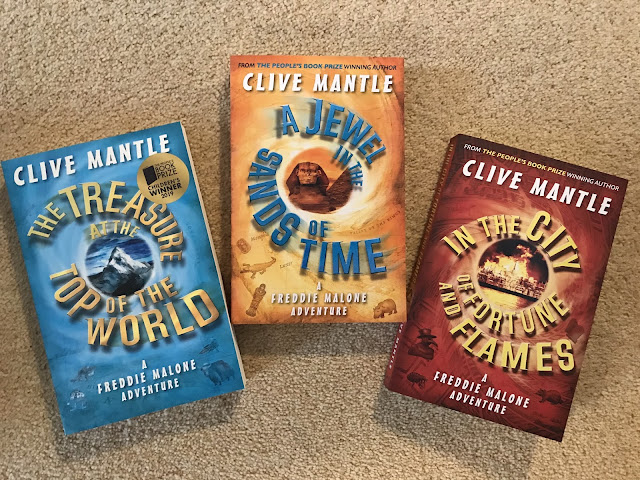 This has been quite unlike the gestation period for either of my other two books in the Freddie Malone series. My research for ‘In the City of Fortune and Flames’ started well over two years ago, amassing detailed notes on the terrible blight of the 17th Century slave trade, the Plague of 1665 and the Great Fire of London in 1666. An exciting and important story line emerged by the spring of 2018. My publishers liked it but said they first wanted Freddie to travel to Ancient Egypt for book 2, so like a cartoon character I skidded to a halt in a cloud of research notes and took a deep breath. 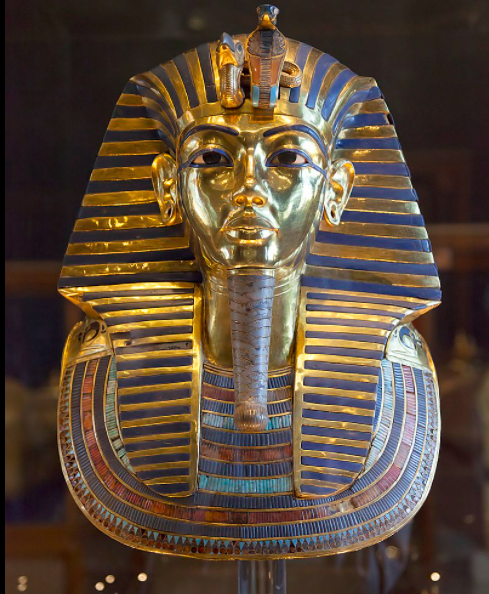 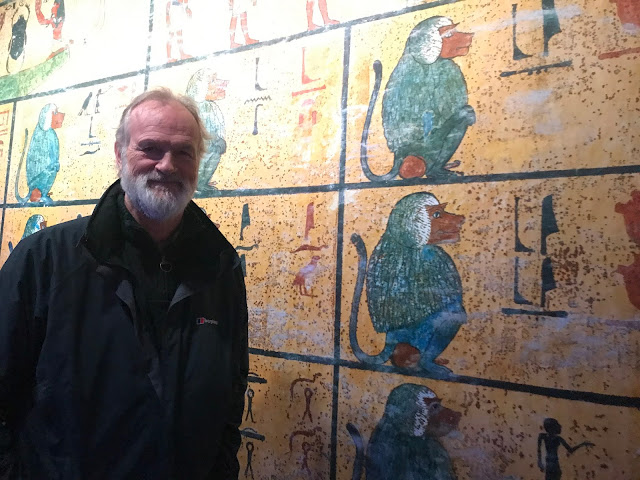 I found it impossible for a week or so to divorce myself from 17th Century London and immerse myself in the great Dynasties, but Ancient Egypt is such an amazing subject that with every book I read about the period I soon fell headlong in love.

‘A Jewel in the Sands of Time’ [book 2] flowed very easily once I had pinned down the actual dates, historical events and people I wanted Freddie and friends to meet. 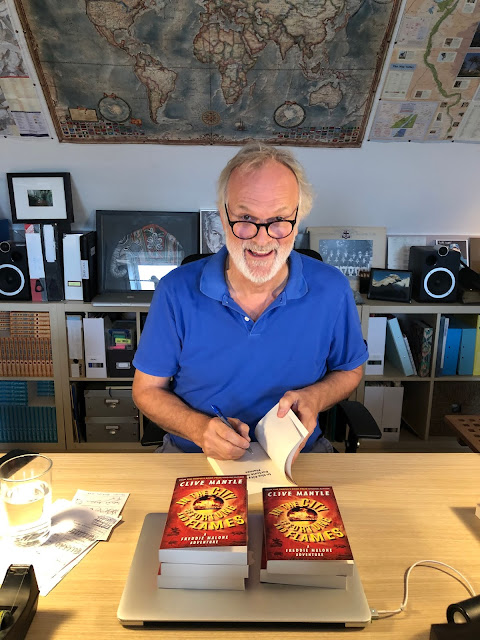 So back to London in the Autumn of 2019. To a certain extent a lot of my groundwork was done by the time I returned to ‘Flames’. But it took time to re-absorb all the information I wanted to include. It is always a battle as to what not to include. I could bore for England on these subjects, and one of the best pieces of advice I’ve received from my agent Penny Luithlen is, “Don’t research dump.” It is an important note for anyone who has immersed themselves so totally in a subject. Selection is paramount, and the detail doesn’t have to be in great wodges which alienate your readership, or make them feel lectured to. The right fact will organically slip in seamlessly if you are clever enough with your situation, story and characters. At least, that’s the plan.

As is always the case with me, the events I think will be the most important or moving, get supplanted in the pecking order by unexpected people or scenarios that pop out of my head as I’m underway. I have a pretty rigid structure before I start, with detailed notes about each chapter which are okayed by my publisher, but by the time they get to look at the book I deliver some months later, chapters will have swapped places, a fleet of extra characters will have been invented, things I’ve said that will be included aren’t, and I hold my breath waiting to be told to revert to the original plan. ‘Phew!’ - So far, so good.

The changes are always for a reason and lead to a much better flow.

The main events in the historical part of Freddie’s adventure have a ghostly and pertinent resonance with our current situation. From reading about them three years ago, I was fascinated with two black slaves Mingoe and Jack. In a bizarre act of symmetry they were ‘owned’ by Sir William Penn and Sir William Batten, Pepys’ direct neighbours in Seething Lane. I already knew Freddie would work for Pepys, and the obvious allies in the piece had to be Mingoe and Jack.

The more I read about them and their treatment, the more my stomach churned.

I had always been aware of slavery, but that I hadn’t been taught at school any great detail about how it has shaped our countries history appalled me. Researching in the enlightening ‘Black Lives in the English Archives’ pages, Mingoe and Jack’s story suddenly sprang to life with the entry concerning their being made to dance for their masters in the Dolphin Tavern. I sat back stunned and closed my eyes, seeing these young men dressed in their gaudy finery with engraved brass and silver collars which declared their ownership to the two Sir Williams. I could see them in my mind’s eye dance for the amusement of these drunken Lords in a squalid pub on Thames Street. What must that have felt like? It was immediately my duty to bring them to a wider audience. 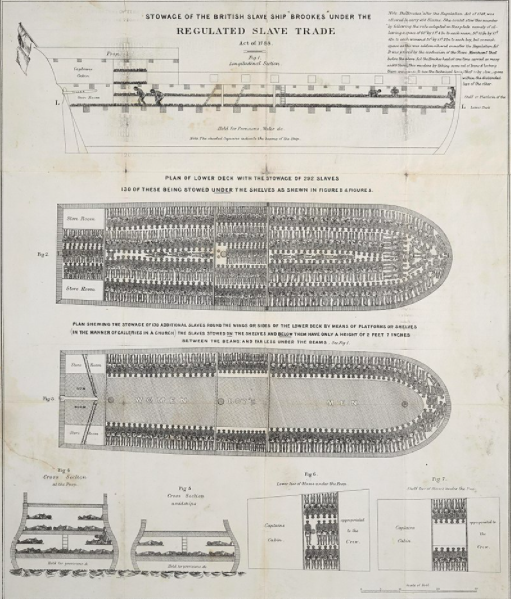 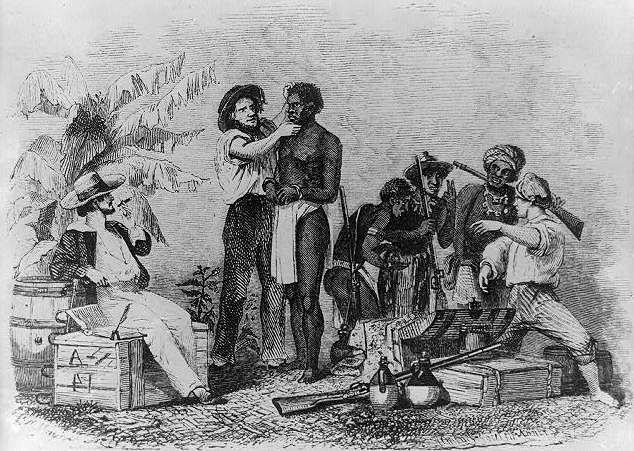 Sale and inspection of slaves - Wikipedia.
The abhorrence of the images above must be widely shown in schools. Our forefathers perpetrated these acts, and the enormous wealth of many major British institutions and families was amassed at their expense. It is estimated that over a period of 400 years nearly 13 million Africans were forcibly transported from Central and West Africa, by the Portuguese, British, Spanish, French, Dutch and Danes. Over a million slaves died on the inhumanly cruel Atlantic voyages, with many more perishing when they arrived in the ‘New World’.
There were 2 to 3,000 Black people in England in the mid 17th Century, and it is not difficult to imagine that most of their experiences would be similar to Mingoe and Jack’s. They were trophies. Highly decorated and finely dressed, playthings and accessories to the richest of rich ladies. Status symbols. Exotic baubles.
Being paraded carrying shopping, several steps behind their mistress may have been preferable to being overseen by a cruel slave owner with a whip in Barbados, but it was still wrong, to the very highest definition of the word.
An unequal division on grounds of colour had started in our nation long before this. But it is plain to see that centuries and generations have subsequently revealed how unforgivably slow we as a country have been to embrace each other as equals. Not only that, we have been misled with the history we have been taught about our own nation’s growth, wealth and morals. Schools need to completely re-evaluate the way the subject of slavery is taught, and I hope my book will be a useful tool in their armoury, in order to promote discussion and help shine the light of total inclusivity into the darkest and most stubborn corners of resistance.
*************
The Plague takes up the first half of the book and the Fire most of the second part. It was an adventure in itself plotting the characters through the actual events as eye witnesses to the sights, smells and horrors all around them. They each have their own particular triumphs and disasters, pursued by a ruthless London gang led by the pipe smoking Old Ma Packer who is in league with the merciless Collector.
************* 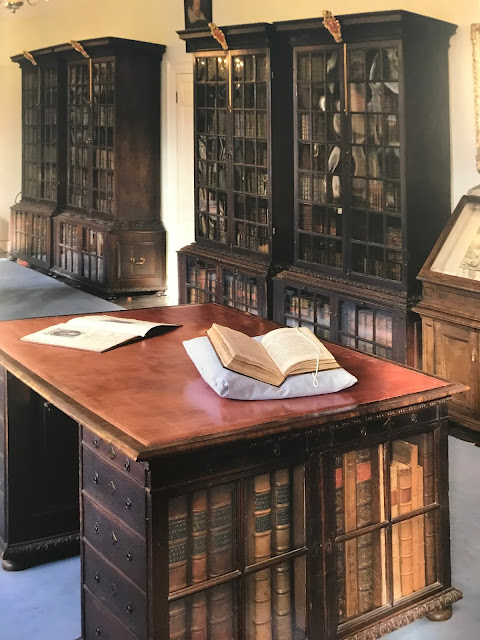 My research included devouring the works on Pepys and the period by Tomalin, Mortimer, Rideal, Porter, and Bastable, coupled with a glorious visit to Pepys’ reconstructed Library at Magdalene College Cambridge. [pictured above and a wonderful place to immerse yourself surrounded by his books and bookcases, desk and paintings]
I built layer on layer of background and fact until I was fit to spill all onto paper.
The resonance of the Plague with our current pandemic crisis is frightening. The misinformation, the confusion, the corruption, the waste, the panic – each manifest themselves in different ways during both disasters, but are present nonetheless. A 17th century city of 500,000 people held in the grip of fear, who in 9 months were reduced to 400,000.
20% of the population dead. The official figures in the ‘Bills of Mortality’ are approximately 70,000, but the astonishingly corrupt ‘Searchers of the dead’ and the ‘Watchmen’ added nearly a third to that total. Both groups accepted bribes either to register a non plague verdict of death [Searchers], or to turn a blind eye, allowing a relative compulsorily locked up with an infected family member to escape [Watchmen]. In both scenarios the disease was allowed to multiply, directly due to corruption and greed. The rapid exodus of the wealthy from London, including many doctors and apothecaries, left the Plague to become largely a disease of the poor. Into this treacherous situation, and through the dank and fetid streets, Freddie, Mingoe and Jack shine a beacon of hope.
Immediately after writing the last paragraph, I turned on the Radio 4 news to hear Dr David Nabarro, [previous Director General of the World Health Organisation] call the Covid 19 Pandemic ‘a disease of the poor!’
We really don’t learn very quickly do we?
History is important. It is REALLY important. 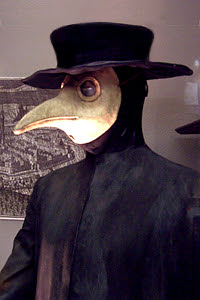 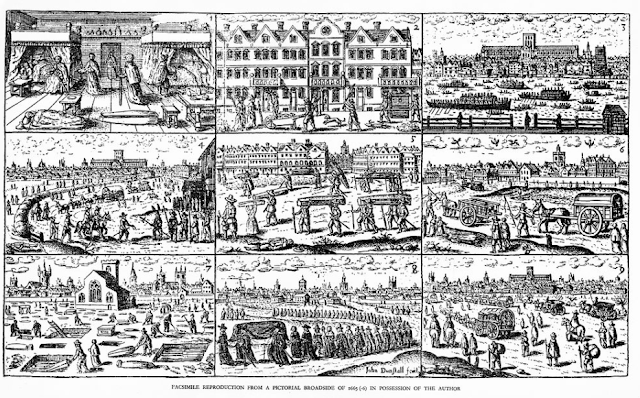 Scenes in London during the plague - Wikipedia
Freddie can’t change the Historical facts of the Plague, but with Mingoe and Jack they can minister to the sick and the dying and outwit the merciless gang which operates around them, which they accomplish with great effect. The Great Fire of London, artist unknown - Wikipedia.
In the case of the Great Fire where Ruby and Connor join forces with the others, I place the characters in the actual progression of the blaze, as it marched for 3 days Eastwards from Pudding Lane fanned by relentless hot winds. It turned Westwards on the 3rd evening after consuming the old St Paul’s and even threatened the Tower of London which was packed with 600,000 lbs of gunpowder. 20% of the houses in the City [13,200] were destroyed along with St Paul’s and 87 churches, whose stone simply crumbled to dust in the intense inferno, destroying the precious valuables many had placed inside thinking them safe.
Freddie and his team have to stay one step ahead at all times, whether combatting the flames by the Duke of York’s side, or outwitting the Collector who is after some legendary Diaries and a very famous cheese. [amongst other things] The very real troubles our hero’s face in their daily lives in the 21st century, pale somewhat when compared to the situations encountered when they travel back to the Fire. Each excel in the life and death struggles they are forced to confront. There’s something about a disaster which brings out the best in all of them. 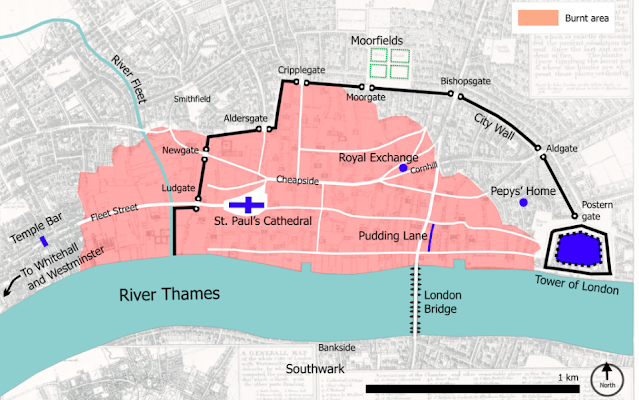 Central London in 1666, with the burnt area shown in pink - Wikipedia.
It was an enormous pleasure immersing myself in the 17th Century for the last two years, with the crumbling edifice of the old St. Paul’s as a backdrop, and pitch covered pirates rotting in metal cages on poles in the Thames, overlooked by Cromwell’s head on a spike at Westminster Hall, whilst the King fed delicacies to a crane with a wooden leg in St James’s Park, all of which feature at various times.
I sincerely hope you can see, hear and smell the streets as you read, and hopefully enjoy the adventure.
Now, where to next?
Clive Mantle.
Wiltshire. October 2020 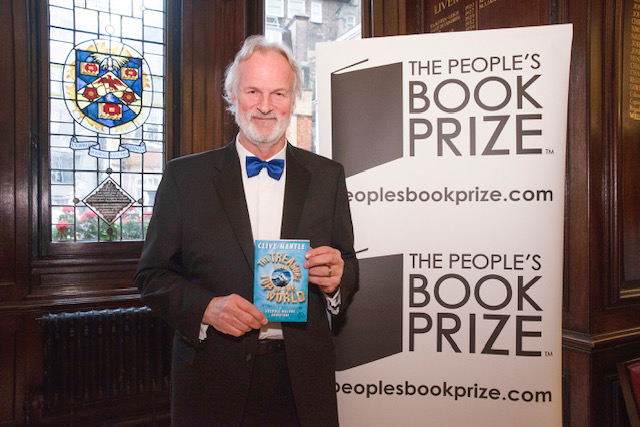 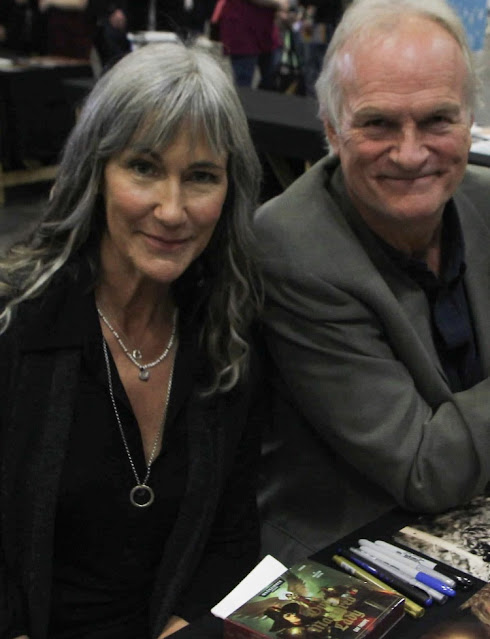 In the City of Fortune and Flames 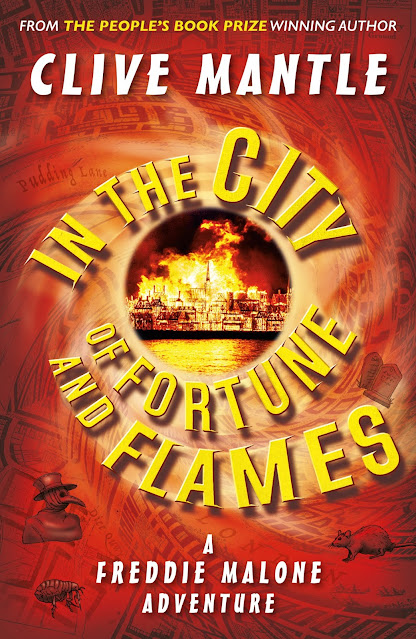 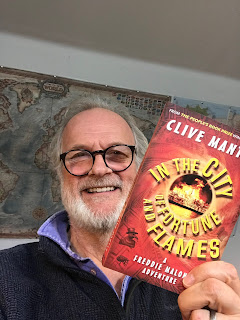 Clive Mantle is a much-loved British actor, a star of both stage and screen for over 40 years. He is perhaps best known for playing Little John in Robin of Sherwood, Great Jon Umber in Game of Thrones, Simon Horton in The Vicar of Dibley and Mike Barratt in Casualty. His voice is also well known from his work on over 180 audio books, and voicing animated characters, including Gator in Thomas the Tank Engine...
...And, he is now a published Author. 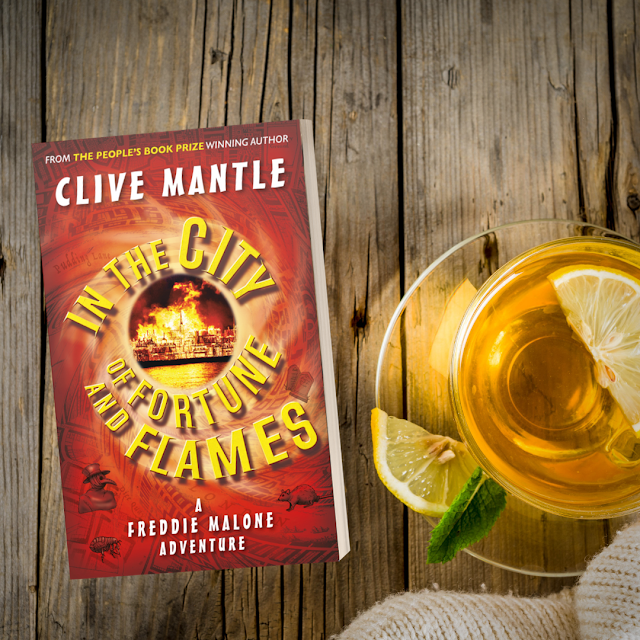